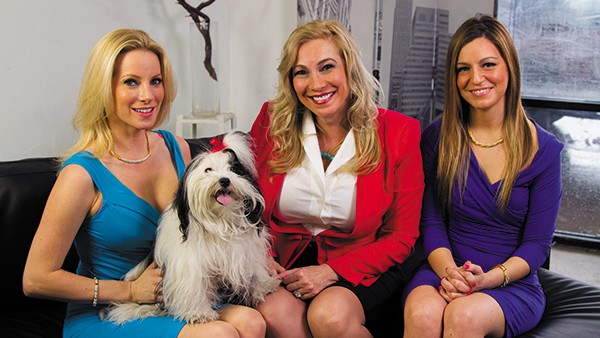 When you think of a “pot-head,” you might think of a young, lazy stoner, perhaps wearing baggy jeans, a backwards hat, with no real job or direction in life. But Cheryl and Aimee Shuman are blowing away that stereotype. While they may not like to be called “pot-heads,” they are cannabis enthusiasts, and the game-changers that the industry has been searching for.

Residents of Beverly Hills, Calif., Cheryl and Aimee are the antithesis of what you would expect a pot smoker to be. Together, they own the Beverly Hills Cannabis Club and have garnered quite a reputation nationally. Cheryl became revered as the “Martha Stewart of Marijuana,” but she has outgrown that title and is now a go-to marijuana expert. They have appeared on shows like Katie Couric, ABC’s 20/20, The Doctors, The View, Dr. Phil, and CNN News, to name just a few — a feat that, 10 years ago, would have been unheard of.

Cheryl had never smoked a cigarette in her life, up until she was prescribed cannabis for a mood disorder in 1996. She found that cannabis was a superior mood stabilizer and was more effective than any side-effect ridden anti-anxiety or antidepressant that had previously been prescribed to her. After a severe car accident and an aggressive ovarian cancer diagnosis in 2006, cannabis proved to be more than just a treatment for pain. Within 72 hours of her cancer diagnosis, she went into emergency surgery to have a radical hysterectomy. They also removed of parts of her colon and bladder.

“I got lucky, in that, I feel cannabis saved my life. I can’t prove it scientifically, but I know I’m still here when the doctors said I wouldn’t be,” Cheryl said. Four long years of recovery, treatments, surgeries and doctor’s appointments, and she still wasn’t done. In follow up care, they found another mass on her liver, encompassing her entire liver and growing into her gallbladder. She was in hospice care when she began learning about cannabis oil and Rick Simpson oil, hearing stories about patients being healed by cannabis. But she was living in Ohio and afraid of the legal repercussions associated with cannabis there. So, she relocated to California and planted her own medical marijuana garden.

When Cheryl started using cannabis for medicine, she sat her girls down and had an open and honest talk with them. She strongly believes in being upfront with children about medical marijuana use: address the facts and know that marijuana was demonized; let them know it’s a medicine like any other, and for some it’s a responsible alternative to alcohol. “The bottom line is they’re going to learn about cannabis, or drugs, or marijuana, or whatever you want to call it in school, and cannabis is much easier to get in school than anything else,” Cheryl said. “So I felt it was very important to have that talk with my children about cannabis being used as a medicine for responsible adult use and not for children, and to be treated like any other medication. The fact that it was prescribed by my doctor was an added bonus. I think when you take that mystery out of it; it doesn’t mean so much, it’s like anything else.”

Cheryl’s oldest daughter, Aimee, was only recently influenced by her mother’s cannabis use. She never smoked weed in high school. “I grew up around cannabis, so it wasn’t some novelty to me. It wasn’t a milestone that I had to experience in my youth,” Aimee said. “ I actually tried cannabis for the first time a year ago on the ABC 20/20 shoot. It was through our chef — it was a cannabis infused meal, and I said ‘Mom, you might really be on to something here.’ It’s not that stupid stoner high, it was like I feel good, happy and normal.” Before her cancer diagnosis, Cheryl was an optician to celebrities. She compares coming out as a cannabis user publicly to coming out in the LGBT community: “you’re out, you’re out – and you have to take that stand.” Her clients, who’d dealt with her in confidence before, as well as colleagues and close friends knew they could trust her with anonymity when asking for access to her cannabis garden.

Within an hour of telling her best friend she had a garden, her best friend’s husband called her and said, “Oh my God, Cheryl, I’m so sorry you have cancer, that’s terrible… but I hear you have a marijuana garden, and that’s so awesome.” He was the executive producer of a show called Wilfred, and coincidentally, he was was looking for some plants to use in the pilot of the series, and Cheryl’s plants were hired for the role. They traveled all the way from Northern California to Los Angeles to appear in the show. “Cannabis was the last thing on earth I thought I would be doing,” Cheryl said. Mother and daughter bonded through Cheryl’s cancer diagnosis, treatment, and remission. As grim as the diagnosis was, it was the impetus for their venture into the cannabis business.

“There weren’t a lot of serious business people in the cannabis industry at that time. It just seemed to be a natural fit,” Cheryl said. “When you consider the fact that cannabis got a bad reputation because of lies being told about it, we said, ‘Look, this is a simple re-branding campaign.’ Marijuana just has a bad reputation, it’s not a bad plant. So we just went into action after that.” Mixing family and business seemed only natural for these two. Cheryl says that Aimee is not only her daughter, but her business partner and her best friend. They both lovingly agree they can’t think of anyone else to go on this journey with. “I’ve known you my whole my life,” Aimee said to Cheryl.

Running a family business has its challenges, but Aimee says working together has helped them listen to each other and hash out their ideas. “We also have a great therapist! In fact, our reality show is going to start out with a therapy session with each show,” Cheryl said. Their TV show, airing in the fall on A&E, is going to be directed by Morgan Spurlock. Unlike Weed Wars, Weed Country, Marijuana Grow House, or any of the Housewives shows, Cheryl and Aimee are approaching their show on a different level. “No matter who you are, or where you come from, the mother-daughter dynamic is relatable,” Cheryl said. “We joke, ‘You’re the wind beneath my wings.’ Without Aimee I wouldn’t be here. It’s been a mother-daughter trip the whole way… literally a trip.” Aimee attributes her mom’s survival to the plant. “Without cannabis my mom wouldn’t be here. When a lot of people look at her, they think, ‘Oh you look so good,’ and they don’t realize it’s because of cannabis,” Aimee said.

Mainstream media has been extremely accepting of Cheryl and Aimee. In the last six months, they have made more than 27 international media appearances, and reached more than 200 million people. As a result of their media appearances, they’ve received over 200,000 emails from people all over the country saying things like, “Thank you for representing cannabis in a mainstream positive way.” “It’s becoming dinner table conversation, and it’s acceptable to talk about cannabis now,” Aimee said. Cheryl thinks the cannabis industry has been searching for its spokesperson for quite a while. “I can’t tell you how many times, for years and years and years, I’ve heard, ‘Why doesn’t mainstream media pay attention to us?’ Why is it that mainstream media is always painting us in this subculture, less than favorable light,” Cheryl said. “Enter two mainstream blonde Beverly Hills women, mother-daughter, who kind of break the mold and speak openly, honestly, and authentically about how cannabis has been such a huge influence on our lives, not only from a health standpoint but from a business standpoint. I truly believe, working in the cannabis industry, that this is the Pot-Com boom. This is the Green Rush. I think what Aimee and I have shown, and have been living proof of, is that the American Dream is still possible.”

In addition to their TV show, Cheryl and Aimee Shuman are working on 4:20 destinations, like cannabis-friendly hotels and restaurants, in addition to expanding their cannabis club to multiple locations around that nation that mimics a SoHo House-meets-The Grand Havana Room-type vibe and atmosphere. They recently added Chef Chanel to their crew, a classically trained chef and baker with incredible — but top-secret — credentials. Chef Chanel ran one of the top cooking schools in the country, and has worked as a pastry chef in many well-esteemed restaurants and schools. Chef Chanel will be cooking for Cheryl’s famous infused dinner parties, and working on a cannabis cooking show. Combining a social atmosphere with her love of fine dining, “It’s the only drug best shared with your friends,” Cheryl said.

BY B. LE GRAND
EDITOR-IN-CHIEF