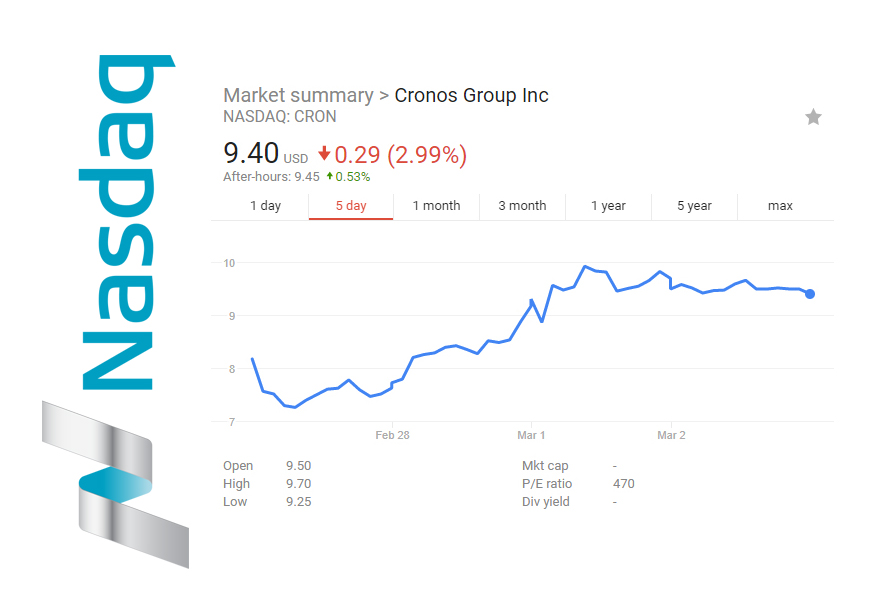 Cronos was already publicly listed in Canada’s Toronto’s TSX Venture exchange, and will maintain its listing. Nasdaq allowing cannabis companies to list has been a challenge previously. In stark contrast, the Canadian exchanges currently list about 70 cannabis companies.

The listing is the latest display of official acceptance by corporate America supporting the Green Rush. U.S. investors who were previously uncomfortable with cannabis over-the-counter stocks (also known as penny stocks), or were restricted from investing abroad now have a real “pure play” corporate public cannabis company they can invest in on the stock market that isn’t Monsanto’s Scott’s Miracle-Gro.

How did Cronos get past the Securities and Exchange Commission? They are a Canadian based company, where cannabis is not Federally illegal, and they do not operate in the United States. They only conduct actual “touching the plant” operations in countries where cannabis is federally legal, Canada, Germany, Australia and Israel. Why did they do it? They wanted access to American investment dollars.

The Toronto-based company produces and sells medical marijuana in Canada, and plans to produce and sell recreational cannabis in August when Canada enacts their official Federal legalization. They also ship their products to Germany, where they are distributed by G. Pohl-Boskamp GmbH.

Cronos is also building a growing facility in partnership with a kibbutz in Israel and has received a license through a joint venture in Australia. Cronos eventually hopes to have a presence in the U.S. as well, but not until it’s legal at the federal level.

Cronos isn’t the only cannabis-related company to trade on the Nasdaq. The British GW Pharmaceutical (GWPH) has a cannabidiol treatment for epilepsy, and there are several other pot-related stocks, like Innovative Industrial Properties (IIPR), a real estate developer and lessor to pot farmers. Monsanto’s subsidiary Scott’s Miracle-Gro Co. (SMG) is another pot stock, as they recently acquired interest in both Gavita and General Hydroponics. There are also a number of pink-sheet or penny stock companies listed like Medical Marijuana, Inc. (MJNA), owner of HempMeds and Dixie Elixirs, and Hemp, Inc. (HEMP), owner of Marijuana, Inc. and The Industrial Hemp and Medical Marijuana Consulting Company, Inc.

Up until now, penny/pink-sheet stocks were the only option to invest in public cannabis companies. Nearly all penny stock cannabis companies are reporting multi-million dollar losses and have exorbitant valuations that may or may not be unwarranted, without any sales or revenue to support the losses. All of this means the currently listed cannabis OTC stocks are extremely volatile and not a safe bet.

Three days after Cronos went public, Canopy Growth (listed as WEED on the Toronto Stock Exchange), their biggest competition and also based in Canada, announced they planned to list on Nasdaq as well. They implied that the only reason they weren’t first to list publicly on the U.S. exchange was because they paused their paperwork to finalize their investment from Corona’s parent company Constellation Brands of New York. The alcohol beverage company paid $190 million last year for a 10% stake in Canopy Growth.

Vahan Ajamian, a Toronto-based analyst with Beacon Securities, says, “These are normal companies abiding by federal laws,” he said, “and they’re OK for investors to own.”