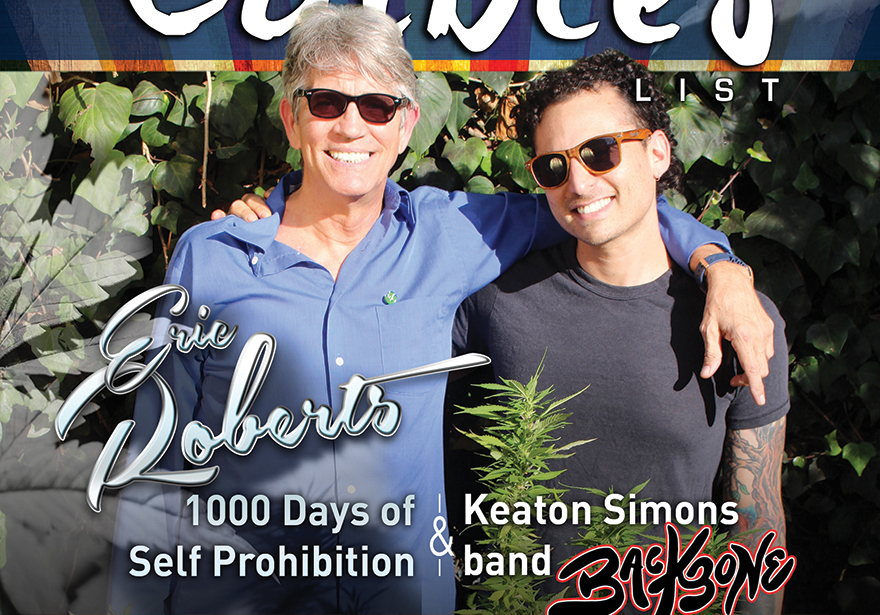 Most people know Eric Roberts as an actor of many big and small screen presentations.  But how much did we know about his cannabis connection?  One of the most well-trained and schooled actors in Hollywood sits down with Edibles Magazine and shares how he initiated a self-imposed 1000 day rehab from cannabis and what he learned from the experience, plus, his life, love, and volcano.

Eric Roberts is an East Coast boy, with high cheek bones and boyish good looks, and has been acting since he can remember, and loving the life he chose. Eric Anthony Roberts was born April 18, 1956 in Biloxi, Mississippi, to Betty Lou Bredemus, 1934-2015, and Walter Grady Roberts, 1933-1977. Both were at one time one-time actors and playwrights, who met while touring with a production of George Washington Slept Here, entertaining for the troops during the wartime.

In 1963, Eric’s parents co-founded the Atlanta Actors and Writers Workshop in Atlanta, Georgia, off Juniper Street in Midtown. They ran a children’s acting school in Decatur, Georgia while they were expecting his younger sister Julia. Roberts has two younger sisters, Lisa and Julia, and his daughter Emma Roberts is well a known actress who has played opposite notable names such as Jennifer Aniston and Johnny Depp, making her major-film debut at age 10 in the 2001 drama Blow.

With a vast array of roles that has taken Eric all over the world playing demanding parts, through it all he found solace in consuming cannabis as a form of relaxation and expansion, but he doesn’t utilize cannabis while acting.  He is a well known performer with an impressive amount of training by some of the best in the industry.  Eric studied in London for two years at the Royal Academy of Dramatic Arts, then returned to the States and continued his studies at the American Academy in New York. He made his NY stage debut in “Rebel Women” in 1976 at age 20 and appeared in regional productions, once playing the newspaper boy in a production of “A Streetcar Named Desire” starring Shirley Knight and Glenn Close.

His career took off  after a well-received performance in King of the Gypsies in 1978, for which he earned his first Golden Globe Award nomination. His second Golden Globe nomination came for his portrayal of Paul Snider in Star 80, co-starring Mariel Hemingway in 1983. Eric then followed up by receiving both Golden Globe and Academy Award nominations for his role in Runaway Train with Jon Voight in 1985.

Now in a career spanning forty years, Roberts has performed in over 250  films, and 200 small screen TV roles as well as stage productions, including The Pope of Greenwich Village with Mickey Rourke and Daryl Hannah in 1984,  The Dark Knight with Christian Bale and the late Heath Ledger in 2008, and The Expendables with Sylvester Stallone and Jason Statham in 2010. His equally varied television work includes three seasons with the sitcom Less than Perfect, as well as recurring roles on the soap Another World as a young boy in 1964, the NBC drama Heroes, a magic mushroom dealing version of himself on HBO’s  Entourage, the CBS soap opera The Young and the Restless,  and Brooklyn 99 on FOX.

One role that I had the pleasure of seeing him in at the Sundance Film Festival back in 1996 was It’s My Party with Margaret Cho.  It seems like this could have been a challenge, but Eric had such heart and compassion shine through in this tender story of a man dying with AIDS.  I feel that the film and his role didn’t receive the notoriety it deserved because of the subject matter.

In 1987, Roberts was arrested for possession and spent 36 hours in jail, pleaded guilty to harassment, and had all other charges dropped.  In 2010, Roberts appeared as a cast member in the fourth season of the VH1 reality television series Celebrity Rehab with Dr. Drew for dependency on medical marijuana. His wife Eliza convinced him that being on VH1 would introduce him to a new generation of fans and broaden his audience, and it worked. Eliza and Eric’s  stepson Keaton Simons appeared to discuss the effects of drug use on their lives. Then came his commitment of 1000 Days of Self-Imposed Prohibition of Cannabis.

During this time, his relationships with his loved ones began to evolve for the better. Eliza, who is an actress as well and was featured in the popular cult classic Animal House, is Eric’s muse and inspiration.  His Stepson Keaton Simons, who he has a heartfelt relationship with, became more open and honest during the prohibition.

Eric made it through Dr. Drew’s program, but after the days went by he realized he didn’t have an addiction and he wanted to prove to his love Eliza that Cannabis impacts his life in a positive way. Also to share how it is a medicine and should receive respect and understanding.  Eliza does not partake in cannabis use at this time, by the way.  The 1000 Days wasn’t difficult for Roberts, and it provided insight on how it affects his mind and body, and the integration of the medical benefits.  Roberts is very spiritual in his life, and his compassion for fellow humankind is warm, genuine, and infectious.

After the 1000 Day Self-Imposed Prohibition came to an end, a realization came to all parties, Eliza, Keaton, and Eric, that cannabis is a medicine and using it was a positive infusion into Eric’s life. Keaton was now infusing too, as he is a talented musician with the group “BACKBONE”, and his understanding now incorporates cannabis in assisting in creating music and art.  BACKBONE is an incredible fusion of funk, rock, jazz, and ska.

Eric Roberts is in the works to be a Cannabis Entrepreneur and is developing a line of edibles and other needed products in the cannabis community.  His name as a supporter could assist the acceptance to the masses as he has grown and realized its importance.  Most noteworthy is that Eliza has come to the positive understanding as well; that cannabis can heal, cure, and create health and
wellbeing, and support balance within one’s life – just as it has done for Eric and her son Keaton.

His favorite method of medicating is edibles, and vaporizing, both flower and Co2 concentrate, and he loves Sativa. His favorite strains are Green Crack and Sour Diesel.

Let’s be on the lookout for the line of products coming from Eric Roberts as his 1000 Days of Prohibition was not lost.  Having his close family understand, grow in unity, and support his efforts for the expansion of cannabis awareness is appreciated by us all in the community.  We need to continue to blend the mainstream and have a person of Eric’s caliber and character come out in support is a step on the path of no more prohibition and access for all.  Seek out the music of BACKBONE with Keaton Simons and his musical partner Adam Vadel, you will be melodically enlightened.

Many thoughts of gratitude to the  cheerleaders Eliza The Muse and Bentley the Dog for being kind, warm and inviting to share their support to Eric and lots of furry hugs.  Most of all to Eric, for sharing his journey of cannabis awareness and how prohibition is no longer needed, personally and publicly.

Eric is keen on a pasta, pizza sauce, and the belief that food and cannabis can bring people and families together.  Indeed as the plant has brought more love and understanding together for this family.  Thank you Eric! May you continue to act, enjoy, love, and vaporize!