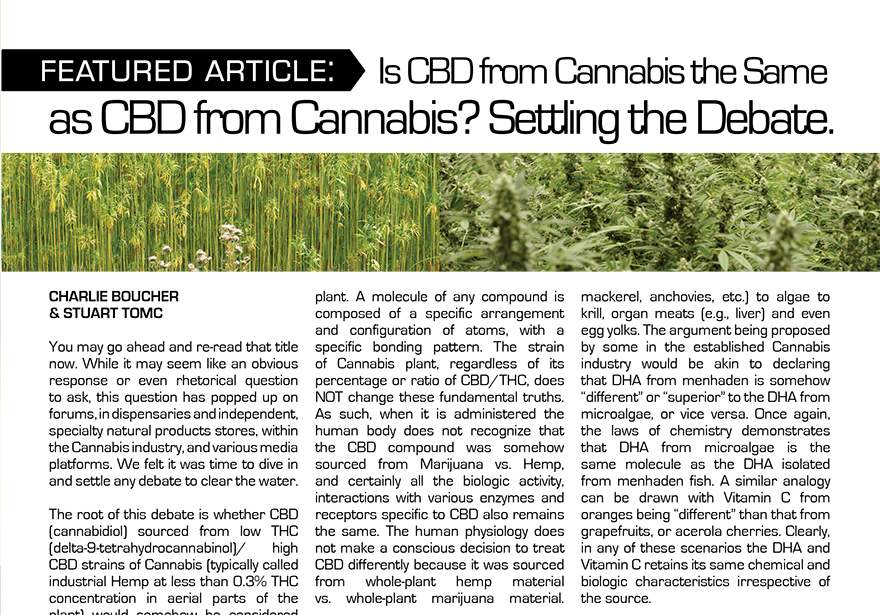 You may go ahead and re-read that title now. While it may seem like an obvious response or even rhetorical question to ask, this question has popped up on forums, in dispensaries and independent, specialty natural products stores, within the Cannabis industry, and various media platforms. We felt it was time to dive in and settle any debate to clear the water.

The root of this debate is whether CBD (cannabidiol) sourced from low THC (delta-9-tetrahydrocannabinol)/ high CBD strains of Cannabis (typically called industrial Hemp at less than 0.3% THC concentration in aerial parts of the plant) would somehow be considered different or ineffective compared to CBD sourced from higher THC/ low CBD strains of Cannabis (i.e., Marijuana). If you’re following the Cannabis discussion nationwide and globally, or if you’re an avid reader, there is no doubt you’ve heard of CBD—the “other” major, fascinating cannabinoid that has non-euphoric, anti-inflammatory, anxiolytic, antipsychotic, metabolic health and neuroprotective benefits, among others. This is in contrast to the physiologic action of THC, and other cannabinoids. However, there are over 90 other cannabinoid compounds found in Cannabis, the majority of have yet to be studied more extensively in biological systems.

For those readers who have shunned organic chemistry with extreme aversion… First, you’re not alone! Next, let us be clear that the laws of physics, chemistry, physical chemistry and biochemistry remain the same whether the molecule is synthesized within and sourced from a Cannabis (Hemp) plant, or a Cannabis (Marijuana) plant. A molecule of any compound is composed of a specific arrangement and configuration of atoms, with a specific bonding pattern. The strain of Cannabis plant, regardless of its percentage or ratio of CBD/THC, does NOT change these fundamental truths. As such, when it is administered the human body does not recognize that the CBD compound was somehow sourced from Marijuana vs. Hemp, and certainly all the biologic activity, interactions with various enzymes and receptors specific to CBD also remains the same. The human physiology does not make a conscious decision to treat CBD differently because it was sourced from whole-plant hemp material vs. whole-plant marijuana material.

CBD-rich strains of Cannabis that categorizes the plant as Hemp vs. Marijuana (or simply Cannabis that has greater than 0.3% in THC) are driven by the expression of genotypes that direct their phenotypic characteristics. The genotypes of various Cannabis strains dictate the biosynthetic pathways that result in different phenotypes and variations in cannabinoid, terpene, stilbene and flavonoid profiles or “fingerprints.” However, assessing the different structure/function relationships of plants with different cannabinoid and flavonoid profiles is an entirely different question than whether the CBD from these distinct strains are inherently different.

We can draw an analogy from the dietary supplement /nutraceutical space
regarding DHA (Docosahexaenoic Acid), the long-chain omega-3 polyunsaturated fatty acid found in fish oil. Interestingly, the dietary sources of DHA are broad and varied, from fatty cold-water fish to purified fish oil (menhaden, salmon, mackerel, anchovies, etc.) to algae to krill, organ meats (e.g., liver) and even egg yolks. The argument being proposed by some in the established Cannabis industry would be akin to declaring that DHA from menhaden is somehow “different” or “superior” to the DHA from microalgae, or vice versa. Once again, the laws of chemistry demonstrates that DHA from microalgae is the same molecule as the DHA isolated from menhaden fish. A similar analogy can be drawn with Vitamin C from oranges being “different” than that from grapefruits, or acerola cherries. Clearly, in any of these scenarios the DHA and Vitamin C retains its same chemical and biologic characteristics irrespective of the source.

The very same can be said about the CBD, CBC, CBG, THC or any other cannabinoid not being “different” despite being sourced from different strains of Cannabis. We hope this has been edifying, and you now understand that CBD is CBD, whether from Cannabis or “Cannabis.” Any argument against it is simply both a logical and scientific fallacy.