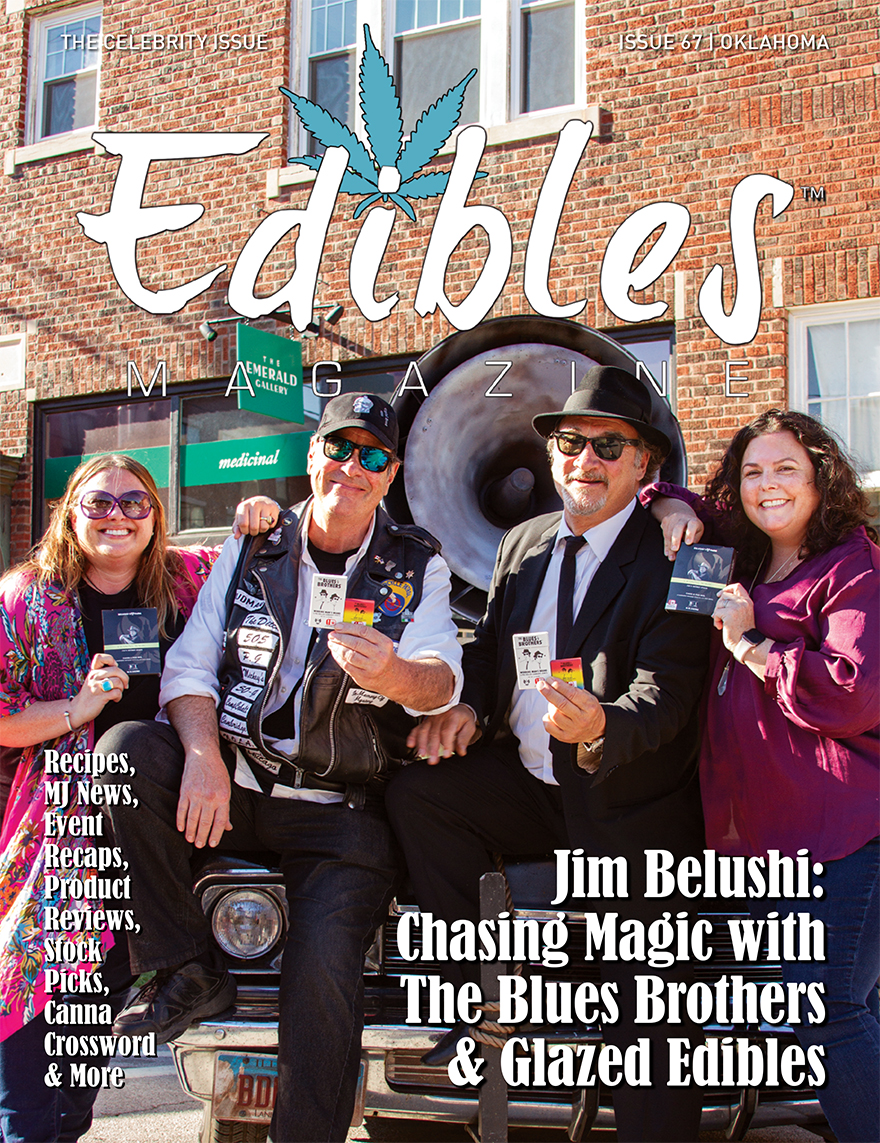 We had the opportunity to visit The Emerald Gallery and meet the minds behind Glazed Edibles, Katie Hutto and Katie Mabrey: The Katies. They own Glacier Chocolate, the high end, non-cannabis infused chocolate company you may have seen in Utica Square. The Katies used to work full time in banking and real estate but decided they wanted to do something that would make more of a difference. They turned the old Glacier Chocolate shop into The Emerald Gallery Dispensary and started producing Glazed Edibles in the back kitchen. Glazed Edibles are created with a combination of ethically sourced, delicious imported Belgium chocolates and fine confections infused with high-grade Oklahoma-grown full-spectrum strain-specific BHO, made with cannabis from Heartland Farms & Alterra Wellness. They come in both indica and sativa. These are some of the most beautiful edibles we’ve ever seen. Each one is painted with vibrant colors and is like a small, delicious, edible piece of cannabis art. They make many kinds of different edibles: the high end artisan chocolate truffles, cereal bars, caramels and more. Now, thanks to a serendipitous set of circumstances they’re making products for Jim Belushi.

Jim Belushi of course, is the actor best known for his work on television shows like Saturday Night Live and According to Jim, as well as movies that include Red Heat, The Man with One Red Shoe, The Principal and Gang Related. His older brother John Belushi was a comedy legend, known for his roles in movies like Animal House and The Blues Brothers, who tragically died young from a fatal overdose of cocaine and heroin. That was in 1982, long before legalized medical marijuana unfortunately. A few years ago Jim decided he wanted to do something to help people struggling with addiction amidst the current opioid epidemic being faced in the United States. He figured doing his part to cultivate cannabis in Oregon would be a good place to start, and Belushi Farms was born. Now, he’s a multi-state operator with products available in Oregon, Colorado, his home state of Illinois and of course, in Oklahoma.

We got to speak to Belushi over Zoom a few days before he arrived in Tulsa. The products he’s making with Glazed Edibles are a lower dose variation of their artisan truffles he calls, “Chasing Magic”. When asked about the Chasing Magic edibles, Jim Belushi told us, “The terpenes and THC combination, that entourage [effect], has a much more desired effect for the consumer. There’s no paranoia that comes with it, no anxiety that comes with it, it just kind of chills you. That was what was so impressive when I met the Katies… the manufacturing ability that they have, the mixture of chocolate, sugar, fats, THC, CBD and terpenes… I really found some magic with these Katies. And I chase magic. I find magic wherever I go. So I think the Katies have captured magic, and that’s why we called it Chasing Magic.” Fortunately a mutual acquaintance had suggested he visit The Emerald Gallery while he was in Tulsa so he just dropped by one day. Before too long, he and the Katies had a plan in place and “Chasing Magic” edibles were on the way, and now they’re here.

Belushi chose to go with the lower dose version because he hopes it will allow older, possibly more conservative patients to consider using cannabis if they may have been resistant to it in the past. They’re also making large, chocolate joints similar in idea to the candy cigarettes that used to be so popular. In addition to the Chasing Magic Truffles and Chocolate Joints, The Blues Brothers have a line of “Working Man’s Brand” pre-rolls and pre-roll  packs. Jim Belushi now performs with Dan Aykroyd in The Blues Brothers legendary comedy music show. They were in town to play Cain’s Ballroom and did a tour of dispensaries throughout the area to promote it, doing meet and greet autograph sessions at shops around town. We were at the Light Heart Dispensary in Sand Springs at 10am and there was a crowd of over 100 people waiting in line to see them. There were people dressed as the Blues Brothers, people with Ghostbuster Proton Packs, with Blues Brothers albums, DVDs, posters, pictures, Ghostbusters action figures and more. There was an authentic “Ecto 1” Ghostbuster mobile on site so fans could get pictures and Dan Aykroyd even signed the car. There was a bit of extra excitement over the Ghostbusters car because the upcoming Ghostbusters film starring Paul Rudd is set in Oklahoma and features a cameo by Dan Aykroyd in his original role, along with Bill Murray and Ernie Hudson. Later at The Emerald Gallery they had the actual, official “Blues Mobile” which had been driven all the way from Chicago and another long line of over 100 eager people waiting to get autographs and photos with Dan and Jim. A few hours later they were playing at Cain’s, the one time home of Bob Wills and the Texas Playboys, whose hit song “Take Me Back to Tulsa” is something of an anthem for our fair city, and also one of the only North American venues ever to host The Sex Pistols. Musically they were in good company indeed.

Jim Belushi even has a new reality series on The Discovery Channel titled, “Growing Belushi” and sometimes Dan Aykroyd shows up there too. The first season got a good response and is also available to view on Hulu, with a second season on the way. Mostly it focuses on the details involved with Belushi starting a cannabis farm from scratch in Oregon and attempting to build it into a successful and legitimate brand. It covers his journey as he learns from the ground up just what it means in this day and age to be a licensed cannabis cultivator. When asked what Hollywood thought about what he was doing we were told that he “Doesn’t worry about Hollywood and Hollywood ain’t worried about old Jim Belushi.”

Interestingly enough and speaking of Hollywood, Tupac Shakur’s first film was “Nothing But Trouble” in 1991, which was directed by Dan Aykroyd and his last film was Gang Related, released posthumously in 1997 and co-starring Jim Belushi. When we asked Jim “What was it like to work with Tupac?”, he responded,  “Tupac’s super cool, I loved Tupac. He was, to me, an artist and musically he was a poet… He was super cool. A man of big hearts.” We can only speculate as to what Tupac would think about the current state of cannabis legalization and innovation but we’re guessing that he would approve in a big way.

Find out for yourself what the magic is all about and track down some Chasing Magic Edibles. We recommend visiting The Emerald Gallery so you can get them from the source and read the Glazed Edibles Review in this issue for a full description of their Glazed and Amuzed Chocolate Truffle Collection. You can see in the pictures here that they’re a very special kind of confection but you’ll need to taste them to truly understand.

Like Dan Aykroyd as Elwood Blues says, “Remember, people, that no matter who you are and what you do to live, thrive and survive, there’re still some things that make us all the same. You. Me. Them. Everybody. Everybody.”

You can learn more by visiting their websites online at: