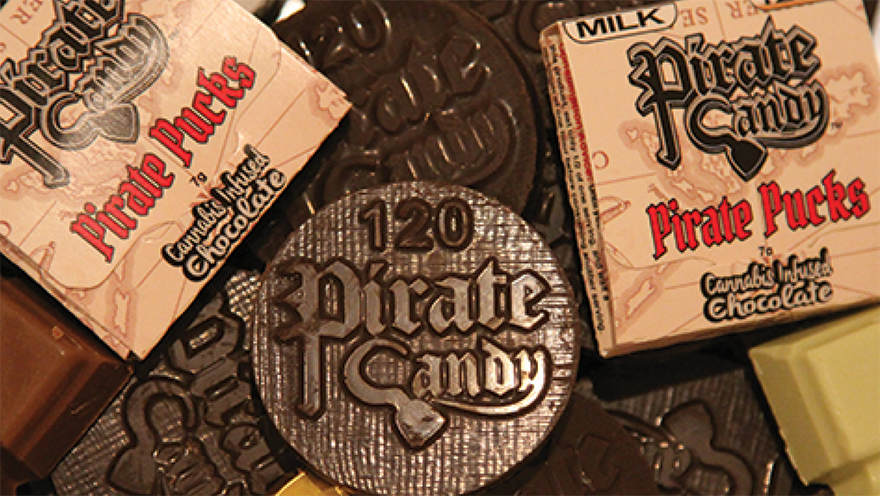 Pirate Candy Company is making a big splash in the California medical marijuana market. It all began as cannabis advocacy, for personal reasons and patient needs. They found a need to make good medicine available, where there was most certainly a lack thereof. Ten years ago, Pirate Bill was a patient at a single club, supplying edibles on a private basis to his collective. He ended up running that collective when another club with a 55+ patient base asked him to make Rick Simpson Oil (RSO) infused chocolate. It was originally something small that turned into a great thing that has helped numerous patients.

Pirate Candy Company was quickly expanding, selling to dispensaries outside of his own, when a friend was diagnosed with bone cancer (where 40% of his bone marrow was cancerous). Bill supplied his RSO to his friend who was originally prognosed with 3 months to live. It’s now a year later, his friend, with the help of cannabis, has beat his terminal odds with cancer.

The Pirate Candy Company line of chocolate includes a milk chocolate, white chocolate, dark chocolate and sugar-free milk chocolate. They use a tasteful blend of belgian chocolates
and high concentrations of hash oil
infusion. My favorite thing about their product is that they have perfected the process of getting more milligrams per

serving size, so there is only less than 20 calories in every 30mg serving. No longer do you have to consume 500 calories worth of a chocolate bar to get medicated.

“We at Pirate use the RSO method because its what we’ve always used in our edible creations over the years. “Tried and true”, as they say. BHO and Co2 extraction methods are being exacted and perfected everyday, yet both are in the early stages of commercial/mainstream function and there is a lot to explore. That being said we are looking into both BHO and Supercritical Co2 extraction for other applications outside of our chocolates.”

In 5 years, they hope to be successfully licensed in several other medical marijuana states. They are currently in the process of penning a deal to license their brand to both Washington and Nevada. Additionally, they’ve landed a deal with Apple Box Distribution. They seek to be perceived as a trusted brand that people can count on, and a constantly forward-moving progressing company to meet the demands of their patient base.

“It’s pertinent to our lives and the people around us. It’s the beginning

of the end of the civil rights battle. The medicine should be rightly available to the people of California
and the states that it’s legal in. It
should be trusted and regulated.”

They hope to marijuana become accepted recreationally for what it’s worth in the next 5-10 years, which is less severe than alcohol or tobacco. They also hope to see the medical research expand in the cannabis sector.

Pirate Candy Company promotes medicating responsibly. Just as it’s not okay to leave an open bottle of alcohol around small children or teenagers, it’s not okay to leave edibles out for easy access to pets or kids. They believe education is paramount at this stage of our cannabis revolution. “Explain what it is, a medicine, rather than something to abuse.”

While we currently lack regulations on infusions, extractions, edibles and testing in the California market, Pirate Candy Company believes regulation creates stabilization. They point out that we can follow industry standards in our crossover food, beverage and medicine markets. “Why wouldn’t we adhere this industry to other industry standards?”

Until California has a body of government dedicated to regulating marijuana, edible vendors in all other states aside from Colorado must stay ahead of the curve and follow strict health and safety guidelines.