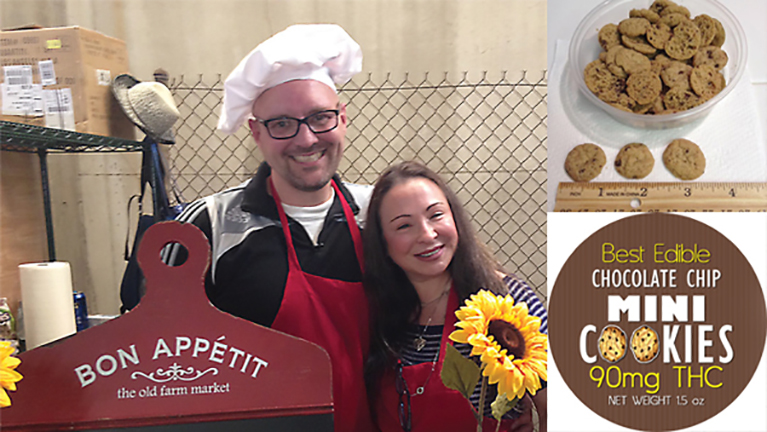 Marcus and Barbara, the creators of Best Edible, located in Southern California, have two separate reasons for needing the medication they use and manufacture. Marcus suffered a debilitating car accident causing the an implant into his left leg and leading to a life of chronic pain. Barbara has severe and painful Fibromyalgia and she treats the pain with edibles which are assisting her with the removal of pharmaceutical drugs from her daily life. It is slightly more complicated for Barbara because she had been taking trazodone since 1998. Barbara’s condition began to worsen under the treatment of pharmaceuticals and Marcus knew a change was in order.

Their reasoning for creating their own edible company is just as compelling. While trying to find the right edible for Barbara at a shop she became ill. The brownie that Barbara consumed, was not properly packaged, stored, prepared, and delivered. After nine months Barbara still had stomach pain and required medical attention. The brownie was full of bacteria causing her to be sick. Again, at this point Marcus and Barbara knew that patients who legitimately need their medications also need them to be professionally made.

In this day and age, if a patient gets worse while trying to medicate and get better, a mistake has been made. Marcus and Barbara didn’t want the same mistake causing sickness to happen to anyone else, which was a driving factor why they wanted to make edibles the professional way. First and most important was safety for the consumers. Properly making, storing and transporting the edibles. Equally as important, is delivering the proper dosages. Just like any other medical treatment you have to medicate responsibly. It will be counterproductive to over or under medicate.

All of Best Edible’s products are machine manufactured to ensure consistency on dosages and sanitation. Their cookies conform to a smaller size allowing the patient easier treatment of their ailments. A smaller cookie means a smaller dosage. For example, if you need 25 mg of THC, but the chocolate bar you buy typically only comes in 180 mg, the 25mg small cookie becomes a more efficient dosage and delivery method. Consistency is imperative to allow the patient’s keeping on schedule and to help regulate their medication consumption while maintaining a normal life.

Best Edible’s cookie flavors include; chocolate chip, peanut butter, oatmeal, and raspberry coconut, along with other special flavors. The cookie packages are sold with 90 mg of medication or with smaller dosages.

Best Edible is working to improve their products and increase their line. Marcus and Barbara are trying to incorporate gluten and sugar free options, but getting it together, and getting it right is a long process.

Another key struggle for Best Edible, and also a struggle shared by everyone in this industry, is unpredictability, and it is part of the reason Barbara and Marcus require a level of anonymity until legalization or the Federal rescheduling of cannabis takes place.

“It’s hard to make long term goals and plans with the possibility that next week a new law could change the lives of every cannabis patient in the US,” Marcus said.