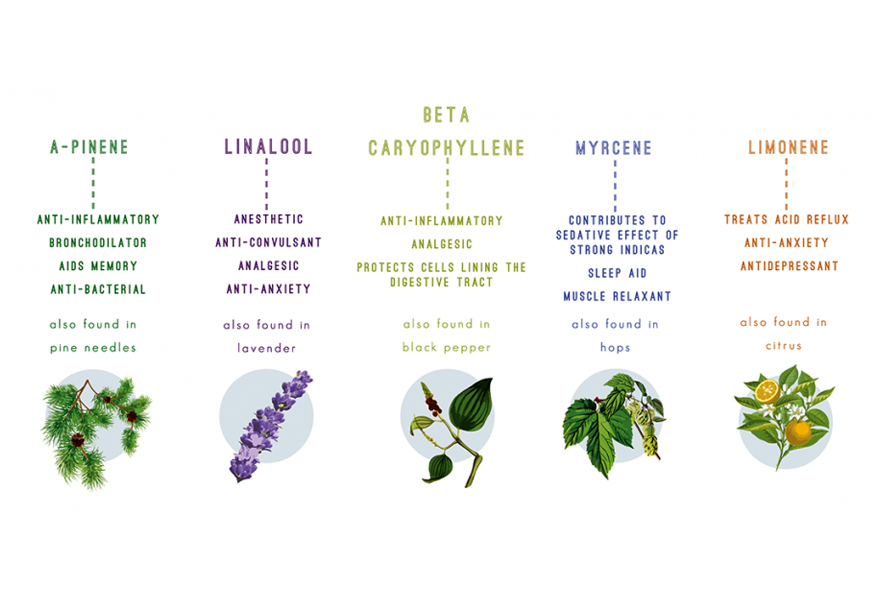 Over 120 different types of Terpenes, in varying amounts, have been identified in cannabis depending on the individual strain. The reason for the familiar odor and even the ‘taste’ (which can vary from plant to plant just like the scent), are the plant’s terpenes. Terpenes are a group of organic compounds found in many plants and even some insects. Terpenes become Terpenoids when altered through a process of drying, curing, or chemical extraction. Terpenes like Limonene can be steam distilled from the skin of citrus fruits. Each plant’s unique terpene content affects not only the aroma and flavor, but the medicinal qualities as well.

Terpenes are also found in vegetables, fruits, spices, herbs, and other plants and are used in perfumes, essential oils, aroma therapy, to flavor food, and more. Terpenes are a common ingredient in our diets and are safe to consume, according to the FDA. While some are unique to cannabis, most of the terpenes are the same as those found in other plants and can deliver similar effects when consumed or otherwise enjoyed through aromatic means. There are many, but these are a few of the most common found in cannabis:

Alpha-Pinene: (also found in pine, rosemary, dill) found in pine trees and orange peels this can have beneficial health effects ranging from anti-inflammatory properties, help with memory tasks, and acts as a bronchiodilator.

B-Myrcene: (also found in mango, lemongrass, hops) this can provide pain relief in addition to anti-inflammatory properties, possible anti-tumor properties, help with muscle spasms, and insomnia. High levels contribute, along with the cannabinoid CBN, to the “couch lock” effect.
Linalool: (also found in lavender) relieves anxiety and stress, is a strong anticonvulsant and is said to amplify serotonin receptor transmission as well as having antidepressant effects; also reportedly effective topically to heal tissue with reduced scarring.

Limonene: (also found in citrus, juniper, peppermint, oranges, tangerines) with an aroma of oranges and citrus, this terpene can aid with anxiety, depression, gastric reflux, and heartburn issues. Even more surprising Limonene may even possess anti tumor properties while benefiting the immune system.

Beta-Caryophyllene: (also found in cloves, black pepper) is gastro-protective, treats ulcers, has anti-inflammatory properties and more; said to be especially effective because of its ability to bind to CB2 receptors.

In combination with THC, CBD, and other cannabinoids, these natural compounds are responsible for the varying strain specific effects cannabis can have on the individual. Some terpenes enhance the potency of the THC, while others serve to counteract the psychoactive effect of that same cannabinoid. Certain terpenes act to facilitate the binding of cannabinoids to receptors or allow the cannabinoids (like CBD) to deliver a more complete effect. It is slowly becoming possible to map the terpene content in a plant, thus making it easier to choose a strain specifically for the effects desired by the patient. In the future, strain enthusiasts (think wine connoisseurs of the cannabis world) suggest that proper testing could ensure patients get exactly the strains (specific combination of terpenes and cannabinoids) which they need for whatever it is they are treating. We know now, it’s not just a matter of Indica vs. Sativa or hybrid (though for now this is often the most readily available indicator of a strain’s potential effects), but a whole range of differences between.

The ability to map the specifics of the strains down to the individual terpene is still in the beginning stages, some labs only offering limited terpene testing and others not really testing for this compound yet at all. Certain strains have been identified and mapped for terpene content which can be found online, but the problem comes in knowing if the plant you have is not only the same strain, but has the same terpene content as the one tested. Terpene content is as much determined by sun, time of day harvested, and soil content, as by the strain type of the seed planted.

While there isn’t nearly enough testing for these compounds available, what is known is the synergistic quality of these compounds when utilized together in whole plant form. THC or CBD alone is not enough to get the full benefits of this amazingly diverse plant. Terpenes and cannabinoids combine to lend a full spectrum of results for each patient, making a compelling argument for utilizing the medicine in whole plant form, rather than those extracts sold as THC or CBD alone. It is no wonder terpenes are getting so much attention, it important to understand what they are when treating with cannabis as medicine.

Terpenes have been taken to the next level, cannabis concentrate extract artists have found a “solventless” way to reintroduce terpenes like Limonene and Pinene into their concentrates adding a very special citrus or piney taste and smell. This is how many of them are winning awards at High Times Cups and Secret Cups making their product stand out among all other entries. The terpenes listed as ones found in cannabis as well as other plants in nature are entirely legal by themselves. You can even get terpenes from Florida oranges to add to your concentrates!