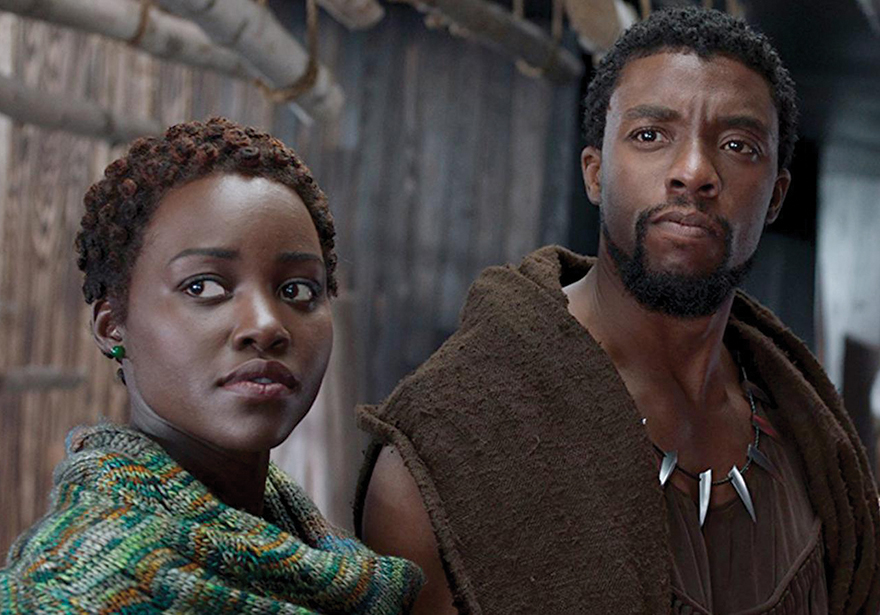 During the screening I couldn’t help but keep my eye on the only two white people in the movie theater. A Dad and his sixteen year old son, sat right in front of me. The teenager had an Avengers T-Shirt on, so I imagine he dragged his father to the nearest movie theater not really knowing what they had walked into. The two white gentlemen sat quietly and resptfully while the rest of us had some Church of Wakanda. The crowd became so jubilant the white folk were obviously surprised by our enthusiasm. In the film when Martin Freeman asks if Danai Gurira spoke English, her response was “When she wants to.” At that point the theater exploded with exclamations of “That’s right!” and “You tell him sista’!’ That’s when I could clearly hear the older white man say to his son, “They realize this is only movie, right?” Yeah.. It’s just a movie, but the themes are real. This movie is obviously a symbolic match up of Barack Obama vs Nelson Mandela. Duh! Chadwick Boseman is T’Challa, Africa’s greatest leader fighting against Michael B Jordan who plays Erik Killmonger. Wait a second, check his birth certificate, because Killmonger was born in the Motherland. And now he wants to put weapons in the hands of every black person on Earth. Sean Hannity’s worst nightmare. My edible really started to kick in when T’Challa is given the secret herb potion that gives him superpowers and vision. That sounds like the real reason to visit Wakanda. They got the best weed.

For Black Panther, I would recommend a sativa, but you might be tempted to take another smoke break. I would suggest taking along an edible to eat in the theater during the opening credits. It should start kicking in right after the second trial by combat and you’ll be sure to be ready to watch the final act in full on Panther vision.

Lastly I want to take a second to thank Reginald Hudlin. Sure everybody is talking about Ryan Coogler as the visionary, but if you read the comics you know that most of the story is based on the writings of film director Reginald Hudlin, who first directed House Party in 1990. Very fitting because if you see this movie in the right headspace, Black Panther will blow the roof off this MF.

DJ Reid 420 is a Hollywood based writer and comedian. He’s also the creator of Black Spider-Man, the “Web” series. www.blackspiderman.net