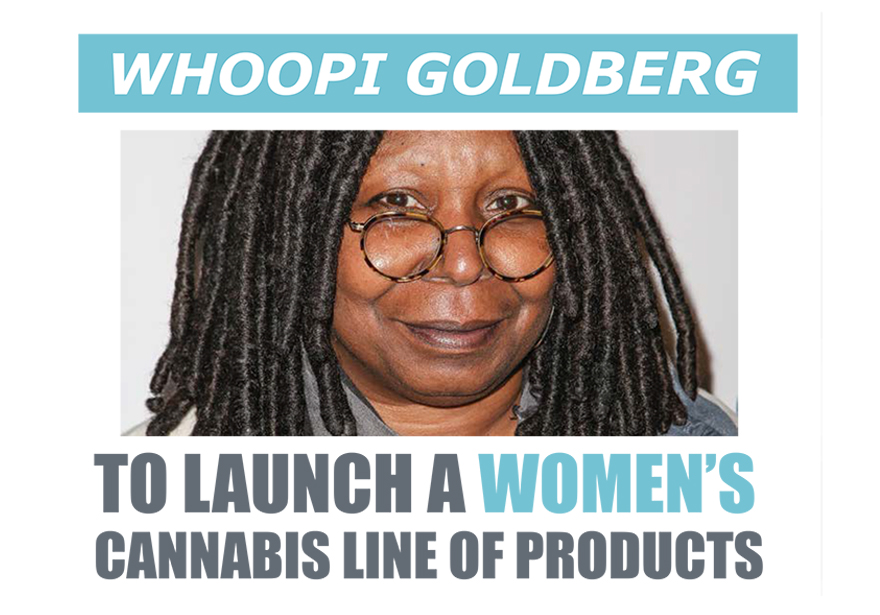 Goldberg, who has been relatively public about her own cannabis use, said her “Whoopi & Maya” company received financial backing from friends and family members, and she will serve as chairwoman.

“I want to go nice and slow with this. I don’t want this to be a joke to people. It’s not a joke to women,” Goldberg told USA TODAY.

“Whoopi & Maya” offers four products: a balm, a tincture, sipping chocolate, and a bath soak. All products are infused with marijuana and aim to reduce the pain and cramps from menstrual cycles. Pricing is yet to be determined.

The product line will be available in California during Quarter II of the 2015, hopefully in time for 420. Whoopi is one of a handful of Hollywood celebrities jumping on the cannabis bandwagon. Bob Marley’s family has partnered with a cannabis company to produce Marley Natural products, and Snoop Dogg backs Leafs by Snoop.

By launching in California, Goldberg and partner Maya Elisabeth are entering one of the world’s largest cannabis marketplaces, with California producing $2.7 billion in sales last year, according to the cannabis-focused data firms New Frontier and ArcView Market Research.

The cannabis industry is one of the country’s fastest growing industries, increasing annually by 31%, with a national market worth $5.7 billion.

California voters this fall are widely expected to pass a ballot measure legalizing recreational cannabis. In many cases, medical and recreational products are identical aside from dosing caps; the only difference is whether a user needs a doctor’s recommendation.

This summer California lawmakers approved series of measures formalizing a form of the state’s new medical cannabis regulatory system. Those measures lay the groundwork for a legal recreational system, and could potentially give anyone offering medical cannabis products a leg up in selling recreational products if they are legalized this fall.

Elisabeth said she and Goldberg believe their niche – if you can call 50% of the population a niche, she laughs – is ripe for success. She said women have for generations been herbal healers, and she believes the company’s cannabis products are no different. England’s Queen Victoria is widely believed to have used a similar tincture to relieve her own cramps, Elisabeth said.
“I’m excited for people to feel comfortable using cannabis,” said Elisabeth, a founder of the all-female Northern California edible marijuana products cooperative Om Edibles.

Goldberg said smoking pot or drinking cannabis-infused tea has helped control her own cramps and pain, and she currently uses a “vape” pen filled with cannabis oil to combat glaucoma headaches. She said she’s not interested in creating a recreational cannabis company to sell joints to people who just want to get high. Goldberg came up with the idea for the company with a friend, and found Elisabeth to partner with.

Goldberg said that at her age, 60, she’s willing to take the risk of violating federal law because she believes so strongly in the company’s mission.

Another interest of the two women is in breaking what some are calling the “grass-ceiling” in the semi-legal cannabis industry, which has seen limited participation of minorities and women in leadership roles.

When it comes to starting cannabis-focused businesses, state regulators have written rules that tend to favor established small-business owners with access to capital and clean criminal records. And because cannabis remains illegal at the federal level, some would-be entrepreneurs feel unwilling to stick their heads above the water, Elisabeth said, especially those who’ve seen how police and prosecutors disproportionately punish min-orities when it comes to drug use.

“A lot of white men don’t have to think about this,” said Elisabeth, who is Caucasian.

Goldberg, an actress and comedian known for films like “Ghost” and TV shows like “Star Trek: The Next Generation,” has been open about using cannabis, penning a column for The Cannabist and arguing for legalization on “The View.”

“This is a nice quiet way that I can be part of this,” Goldberg said of the new company. “It had to help people if I were going to be involved.”

This venture into the public spotlight is anything but quiet, and we thank these women for coming out into the limelight to spread awareness about the benefits of cannabis.