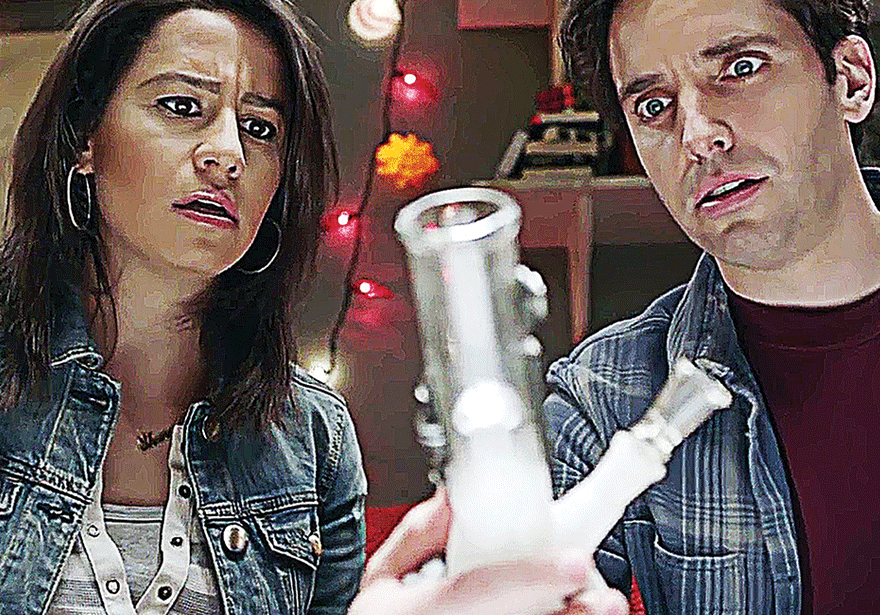 The flowering of new TV and film productions is having a budding flare as the top producers are lighting up the small and big screen with cannabis programming. Since the groundbreaking television series “Weeds” originally had it’s debut on the Showtime network eleven years ago, the canna-business has been consistently growing, changing, and evolving at an exponential rate. It seems that more and more each day, the mainstreaming of cannabis is becoming a reality. As we experience a matter of fact presentation of life in home entertainment that just happens to involve a bit of infusion, we’ll be further paving the path toward acceptance and legalization.

One breakthrough show in production is coming from Sony TV for streaming content, and is inspired by the book, Humboldt: Life on America’s Marijuana Frontier, written by Emily Brady. This story, “Humboldt”, will highlight the Northern California community, which for nearly 40 years has existed primarily on the cultivation and sale of marijuana. After a year of residing within the secretive society of cannabis cultivators, Brady was able to smoke out the everyday life and personal aspects as California transcends into legalization.

John Malkovich, the two time Academy nominated actor, will star as the dynamic patriarch of an influential family whose lives are gritty and sticky with resin. Malkovich rarely is featured on the small screen and his most recent TV foray was on NBC’s short-lived pirate drama Crossbones. This is coming from Sony TV and Anonymous Content (True Detective, Mr. Robot), and was written on spec by Michael A. Lerner (Love and Mercy).

Another Academy Oscar winner to light up will be Kathy Bates as Netflix has given a series order to “Disjointed,” a comedy from successful show producer Chuck Lorre. Bates stars as a lifelong marijuana-legalization advocate who realizes her dream of running a pot dispensary in Los Angeles. Working alongside Bates’s character is her son, three “budtenders”, and a security guard. The comedy will share the “High” profile of what it’s like working in a dispensary setting.

Lorre and David Javerbaum serve as writers and executive producers on the series, which received a 20-episode season-one order, from Chuck Lorre Productions and Warner Bros. Television. “Disjointed” is Lorre’s first non-CBS television show since ABC’s “Dharma & Greg.” He currently has “The Big Bang Theory” and “Mom” at the broadcast network. Bates’ most recent television work came in the last three seasons of Ryan Murphy’s FX anthology “American Horror Story.” She won an Emmy in 2015 for “American Horror Story: Coven.” She also won a guest-actress Emmy in 2012 for her work on Lorre’s “Two and a Half Men.” Her Academy Award came from her starring role in the film ” Misery”, which had critical acclaim. Nice to see that the quality of programing is growing green with talented writers and directors.

Comedian Margaret Cho has been harvested to star in an Amazon marijuana-themed family dramedy, titled “Highland.” This project follows Cho’s character, who after court-ordered rehab gets a chance to start over, but has to move in with her dysfunctional family now running a dispensary. Co-produced by Tomorrow Studios and Amazon Studios, “Highland” hails from writer Liz Sarnoff (“Deadwood,” “Lost,” “Alcatraz”). Cho is attached besides starring to executive produce the show. Cho starred in her own sitcom on ABC, “All-American Girl”, from 1994-1995, and she recently guest starred on ABC’s Ken Jeong comedy “Dr. Ken.” She had a longtime role on “Drop Dead Diva,” and also recently appeared on E!’s “Fashion Police.” Cho is optimistic. “There’s so much happening with the easing up on the prohibition against marijuana and lots of people getting very rich very fast,” Cho says. “My show will focus on a family going through this experience — like Dallas, but instead of oil, it’s weed.”

HBO has picked up six episodes of High Maintenance, created by husband and wife team, Katja Blichfeld & Ben Sinclair back in 2012. Starting as a web series, it gained popularity and is now receiving attention as we move further towards legalization. Ben Sinclair stars as a nameless marijuana deliveryman called “The Guy” as he delivers his product to clients in New York City. Each episode focuses on a new set of characters as they all procure their cannabis from Sinclair’s character.

Also in development from Adam and Naomi Scott of Get Rad Productions, have created “Buds” and sold it to NBC with writer/comic Joe Mande (Parks & Recreation). The comedy revolves around the day-to-day operations of a marijuana dispensary in Denver, Colorado. That project joins Comedy Central with mini-series, “Time Traveling Bong”. The story centers on two cousins Jeff and Sharee who discover a time traveling bong and ride high as they blazed through time. The duo came upon a magical bong with the capability of transporting them to anytime or place after taking a bong hit. This bong takes them on a sativa fueled travels to iconic events in history. “Time Travelling Bong” was created by and stars Broad City’s Illana Glazer and Paul W. Downs, and debuted on 4/20 of 2016. That makes it television’s first offical 4/20 Holiday Special. Broad City itself stands as one of the more cannabis friendly tv shows, as well as being one of the more technically correct. Not to lose out on the big screen, filmmaker and noted toker, Kevin Smith wrote and stars in “Hollyweed”, a project financed by Fremantle Media and five films with ties to the rapidly growing cannabis industry.

MTV has a cannabis themed show debuting this fall too, “Mary and Jane”, which revolves around the misadventures of two millennials, played by Scout Durwood and Jessica Rothe, who run their own marijuana delivery business in Los Angeles. Mary and Jane is executive produced by Snoop Dogg, who is also featured as an actor in at least one episode. The show boasts some impressive cannabis credentials as well as a fresh comedy pedigree provided by the two leading ladies. If the chemistry in this formula works out right, MTV might be sitting on one of the funnier properties in the budding industry of canna-programming, which means it might also be one of the better ones to watch when you’re really high.

On regularly scheduled programming occasional and ever more casual references are popping up every day. They are small at this time, but growing in numbers on a weekly basis. For instance, edibles have been featured in Golden Globe, Emmy winning shows “Orange Is the New Black” and “Modern Family”. Netflix series “Frankie and Grace” starring Lilly Tomlin and Jane Fonda seem to have smoked and toked in most every episode, now going into their third season. This is not these ladies first soiree in cannabis on screen as you may recall the memorable munchie fix was in the comedy “9 To 5”, when Lilly, Jane, and Dolly Parton indulged in a joint and had barbeque. The reality show “Keeping Up With The Kardashians” shows matriarch Kris Jenner with her mother ingesting infused gummies, which could be considered a bold move, as the average group viewing the show is under the age of consumption.

Even more a sign of the times that United Talent Agency (UTA) has signed the publication High Times to its roster as it becomes the first official cannabis client for a major Hollywood agency. High Times, has been the go to print publication for over 40 years, dedicated to the culture, lifestyle, cultivation, and activism of cannabis. Back in 1974 is when the ground breaking magazine took a risk with what was at that time, a very provocative subject. UTA will represent High Times across film, television, digital, consumer products, licensing, games and premium brand sponsorships. This is the first cannabis based business to be regarded enough of a name talent to find a top agent to represent them.

As cannabis themed TV and film are budding in demand the green grass is growing with awareness. Medicinal and recreational access to cannabis is now available in 23 states and with the impending November election possibly set to raise that to a higher statistic. This makes the acceptance even more of a high time for main stream media. As most know, the entertainment industry has a large contingent of 420 friendly creative staff, who is now feeling comfortable about coming out in the workplace. In the last year alone, a great many more pitches had a green theme to story lines than ever before. As this country become legitimized, the reflection in programing cannabis centric stories will only continue to grow, and yield even more successful harvests for the networks behind them. So,do you think you’re ready for Hollyweed coming to your town?