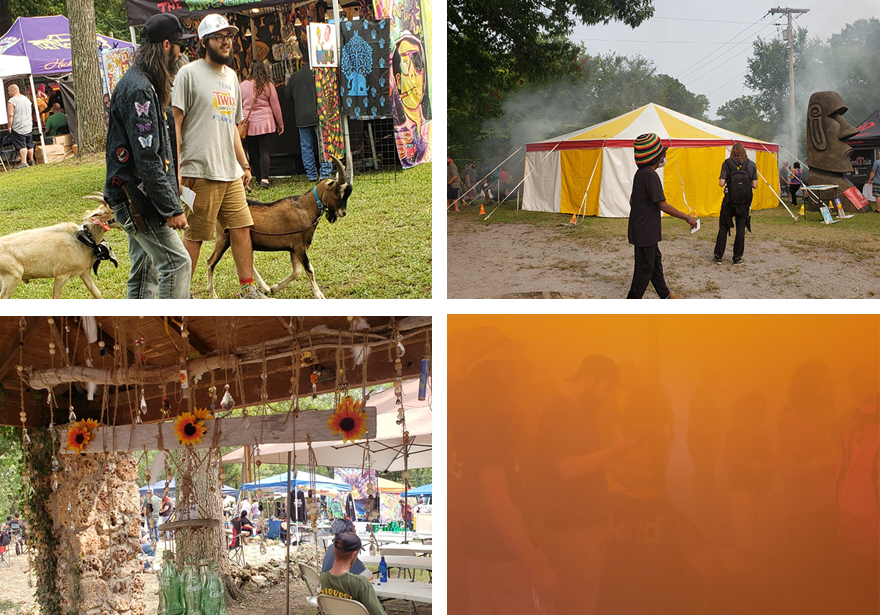 Just a short scenic drive east from Tulsa lies a utopia of sprawling campsites and natural beauty known as Copperhead Rally Grounds in Spavinaw, Oklahoma.  Typically known for its motorcycle rallies, this versatile venue would soon prove to be the mecca for all types of cannabis consumers, industry folk, and artists of all mediums, this side of the state. Once I caught wind of the event, I packed my bag and embarked on a journey to catch a glimpse of the 2nd annual Harvest Fest.  The event promised chill vibes, excellent vendors, and amazing bands – and it certainly delivered just that.

As I turned into the campgrounds and hit the dusty lot, my excitement began to swell.  I was greeted by a small group of friendly staff and smiling faces. After a few short minutes in line, I was handed my pass and took off to find parking, of which there was an abundance. A short stroll to the gate and I was inside the festival, ready to toke, talk, and shop to my heart’s content.

First things first, I hit the on-site dispensary for a pre-roll and grabbed a cold, local brew from the bar at the center of the event.  There was a band getting ready to play soon so in the meantime, I cruised around the array of booths that encircled the event. I met so many wonderful people from growers and edible-makers, to glass-blowers and other local artists, some who sourced their supplies using driftwood found in nearby lakes. The festival was seeping with creativity and I was lucky enough to be there soaking it up.  After a few purchases, a pre-roll, and some gummies it was high time I headed for the food trucks.

Normally, I would have gone for one of the savory options like the BBQ or loaded fries that were on the menus, but when I spotted a truck selling fried pies, I was struck with a sweet tooth and nostalgia for my grandma’s kitchen. I ordered two, one for each hand, and made my way towards the stage when I spotted what appeared to be a circus tent on fire. As any curious soul would do, I made a b-line to investigate.  To my delight, I had just stumbled upon the most glorious hotbox I’ve ever encountered. With no line to get inside, I made my way through the thick haze of sweet skunky smoke. I think I lasted all of 15 seconds before desperately feeling my way out towards oxygen. Picture Stevie Wonder in a corn maze.

Before leaving, I made my way into the outer rungs of tents and encampments. I can honestly say, my only regret is not attending this festival with the intention of camping. Beyond the organized nucleus of the festival, I discovered attractions not listed in the event description. From a guerilla dj booth to rope bondage exhibitionists, it was clear to me that the true spirit of Harvest Fest was not only found in the daytime activities, it was an after-dark experience with some of the best folks around, and worth every camping-pass penny.