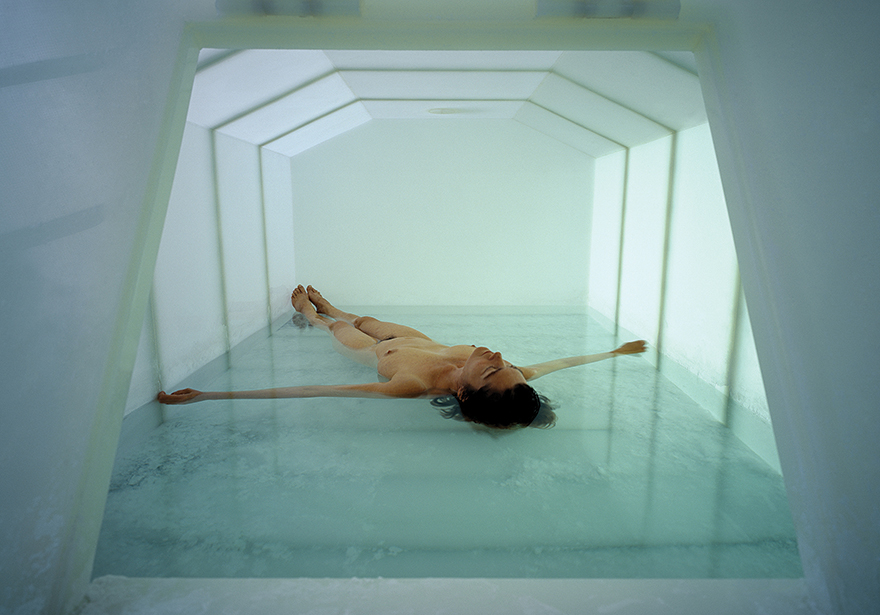 The Sensory Deprivation Tank was developed in 1954 by medical practitioner and neuropsychiatrist John C. Lilly at the US National Institute of Mental Health (NIMH). Lilly experimented with sensory deprivation, and often would combine floating with psychedelic drugs like LSD and Ketamine in addition to attempting to communicate with both dolphins and extraterrestrials. Sensory Deprivation is the practice of floating weightlessly in an ultra purified, skin temperature solution of dissolved Epsom salt within a light-free and sound resistant isolation floatation system. Isolation tank therapy is used to treat a variety of ailments and disorders, including: muscle tension, chronic pain, hypertension, rheumatoid arthritis and PMS. The first time I ever heard of isolation tanks was when I saw the 1980 movie “Altered States” as a kid, and they were recently featured in “Stranger Things” on Netflix. I personally went floating for two hours in a tank at Float Lab on the Venice Beach boardwalk after eating close to 175mg of top quality THC edibles to see what the effects would be and how the combination might aid in the treatment of Post Traumatic Stress Disorder. Here’s what happened!

First I took my medicine – I ate two 50mg Chocolate Brownie Bites by Anakatrina’s Edibles about 30 min before I started and followed that with close to a third of a 300mg Apple Pie Cookie from Strictly Edibles five minutes before it began. I’d also been vaping on a W Vapes Banana Cookie Pen the entire ride there, so when we arrived I was fully medicated and good to go. After meeting “Crash”, the founder and owner of Float Lab, I was escorted to the introduction and prep room. Once I’d been advised of the process I was shown to my own tank room, took off my clothes, put in my ear plugs and took a shower using the organic body wash provided. Next I climbed into the tank, faced and closed the door and laid back into the darkness. My body stayed totally buoyant and thanks to the salt I really was floating on top of the water in what felt like wet and slippery zero gravity. It took a few moments for my body to stop drifting and settle, but when it did the sensation was kind of like sinking into a memory foam mattress made of spongy liquid. I’m pretty tall, just over six feet and have extra long arms too but once I stopped moving and wasn’t in contact with the sides or edges of the tank the space started to feel infinite. There was no claustrophobic feeling, quite the opposite actually. And it was dark, really, really dark. A few times came when I seriously didn’t know if my eyes were open or closed and I definitely had some colorful visions of dancing light here and there, sometimes taking shapes and sometimes staying abstract.

I continued to zone out in different waves and layers thanks to the combined effects of the floating and the edibles. When I did, it was very much like being in a very nice and serene dream. The earplugs and soundproof chamber made it quiet, extremely quiet. Every now and then the extreme quiet was interrupted by a loud and thunderous noise that I realized, over and over again, was the sound of my own rhythmic breathing. There was also a faint sound of singing that sounded tribal but clearly in an imaginary language that would get slightly louder before fading back out. My mind is rarely still, but the isolation let me experience a stillness and sense of serenity that I haven’t known very much, and not for a long time. It was wonderful and I was also acutely aware my own sense of self and what it truly felt like to be completely alone with just my own thoughts. I did a solid two hours and it literally seemed like less than ten minutes. My perception of time has never been so distorted and that’s one of the most interesting aspects of this journey.

Floating in an isolation tank on edibles was a lot like getting high and taking a nice warm bath in total darkness while wearing earplugs – yes, it was relaxing but it was also so much more. It felt like going on a walkabout inside my own primal dreamscape. It felt like returning to the womb. It felt like being set adrift in the void of space, if the void of space was warm and wet and felt intensely safe. I’m highly recommending the experience. Please know your dose and don’t try this with too much THC. You may also want to start with just an hour and increase your time as you continue. More investigative research should be done, and I certainly intend to, so keep reading for more updates. I seriously want my own tank one day – it’s now number one on my wish list! Float Lab has a state of the art facility in Westwood to service all of your float therapy and isolation tank needs. Check them out online at: www.floatlab.com