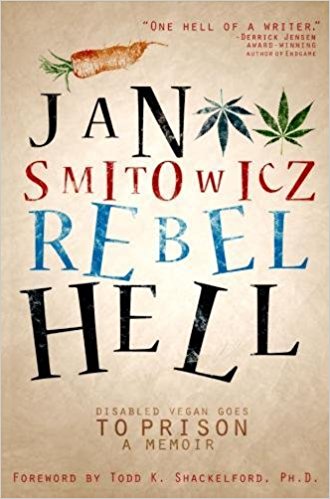 Let’s just break it down and analyze this shit for a second . . .

What is the truly greater evil: delivering 53 pounds of flower buds [which just for the record = a few beer cases’ weight], or the crimes—committed by the very people tasked with upholding our laws—of cops’ lying on the witness stand [i.e. perjury], and the willful disregard of the Fourth Amendment to the Constitution by judges? Which crime has more victims? Which crime has a worse effect on society? Cops and judges know they can get away with violating the law. The System is rigged, plain and simple.

So then, why should anybody inherently respect the law when the very people in charge aren’t respecting the law?! As defense attorney Tim Lohraff so eloquently put it, echoing my sentiments above, “. . . [Cops] will testify in court and lie—which is perjury. So you have a cop committing a greater felony to convict a lesser felony” [quoted in Drug Crazy].

The fact that, on a surface level, our legal system appears democratic is integral to maintaining the whole illusory charade. [Obviously there are plenty of fascist governments wherein the legal system is far worse than ours, but they generally don’t try to pretend they’re fair.] In America, the System’s pushers—drug connotations very intentional—have conned most citizens into believing we have this egalitarian, exemplary legal system. It requires personal experience and/or research [imagine that!] to glimpse the truth. I believe this fully: If all the best minds of a generation gathered together and deliberately tried constructing a legal system that seems democratic, but is in actuality more pernicious, heartless, senseless, and unjust than the American one, they would fail spectacularly.

I’m back home in Mendocino County and trying to enjoy life as much as possible. Though I’m failing spectacularly. It’s been about two weeks now since the Motion to Suppress the Evidence Hearing [though it was much more like a Motion to Suppress the Truth; I know, I’ve already said this literally word-for-word, including in this Inter-Mission’s very title—but certain things bear or even demand repeating]. We’re just waiting to hear from Bruce about Judge Hamer’s verdict. And every day my anxiety grows more and more. A wretched all-consuming Dread that started in my gut and now seems to permeate through, like, each and every one of the forty-trillion [40,000,000,000,000] cells in my body. That’s of course a ridiculous statement, because why would Dread, an emotional sentiment, possibly be inside my actual cells? The logistics are improbable at best. EXCEPT! . . . except I think that’s really how it feels! Waiting to learn whether logic and decency and constitutional adherence and Bruce’s terrific arguments have somehow convinced Hamer to go ahead and grant the Motion to Suppress and symbolically dump the prosecution’s “case” into the fucking sewer—the only proper place for it, the one place it belongs . . . that waiting period creates invasive prolonged symptoms like gut-clenched terror, annihilated concentration, trouble sleeping, a maddening and ceaseless psychological fixation that renders impossible the enjoyment of anything-and-boy-I-sure-do-mean-fucking-anything [including actual fucking! [with Rachel, not with my Mendo cabin-roommate Ryan [necessarily]]]. A speedfreak-like restlessness that makes me wanna blow my goddamn brains out with a .38 magnum or hell maybe even two of em one in each hand barrels pressed against my ears just to make sure the brain that facilitates these feelings is obliterated, increased pain → anxiety → pain → depression → pain, smoking even more cigarettes and weed because I don’t give a shit about moderation anymore, and so on . . . yeah, it does indeed FEEL like these facets of Dread exist in 40,000,000,000,000 distinct places throughout my body. Who knows; I’m not a scientist! Didn’t even perform up to my usual standards in freshman high school Biology, and that was like over a decade ago! So hell, maybe The Dread is permeating every one of my body’s cells.

I mean . . . now that I’ve run through all that ↑↑↑ shit . . . I’m starting to consider the possibility that human emotion, especially my human emotion, is so overwhelmingly powerful and dramatic and sometimes like in this case just totally pestilential that maybe the cell-permeating thing IS possible. The Dread is so goddamn intense during this limbo-week that perhaps it’s able to defy the very Laws of Nature.

Yeah, yeah definitely; the concept’s growing on me. Emotions—for humans and other animals alike, human supremacist-enculturation not-withstanding—are already nebulous and metaphysical in a lot of ways. So why the hell not? Certain-feelings-manifesting-themselves-on-a-cellular-level is nifty, rock solid symbolic linguistic expression. In my opinion. Words alone aren’t always sufficient to express the magnitude of some things, and emotions are undoubtedly one of them; something I’m trying to demonstrate in tangible practice with this memoir. I see no compelling reason not to suggest, then, that hyperbolic language vis-à-vis my cellular Dread need not be limited to the symbolic—that some emotions are so inexpressibly consumptive that, for all intents and purposes, symbolism becomes reality . . . hyperbole becomes understatement. When trying to render the inexpressible in ways that feel adequate and immediate and real, I ask again: why the hell not?

As a writer, words are just about all I have. Might as well utilize them to maximum effect. Even if it comes off as over-the-top, absurd. Given the degree of ludicrous absurdity that permeate the Prison Vortex, I’d much rather overstate my case than express it weakly, without a gravitas commensurate to such utterly preposterous circumstances! If I fly too close to the sun in this #Januscript, I can at least take solace in knowing I did my goddamndest to reveal and even mimic the insane, farcical illogic and—dare I say it? [I do, I do]—the apparent logistical/scientific/ metaphysical impossibility of the Prison Vortex’s somehow legitimate essence!

Anyway, I’m running errands nearby in the little town of Willits when I finally learn the judge’s decision. I’m inside the local natural foods store staring at organic vegetables in a kind of Dread-daze and my phone rings and it’s Jim. I’m wondering now if Mom convinced Jim to deliver the news because she just straight-up didn’t have the heart to be the one to tell me. How you holdin up? Jim asks me. Okay I guess. Your mother got an email from Bruce—that’s your lawyer’s name, right?—a little while ago. Oh gawd, I say, and my heart begins thumping. Did we lose the Motion? Yeah, Jim says. Sorry buddy. Ughhhhhhh, I moan. Unable to form actual words, spirit doing its plummeting act that I’ll become ever more familiar with. Then Jim delivers the knockout, seeming to make sure his voice only subtly indicates the horrific gravity of the information: Bruce said the prosecution has offered a new plea deal of seven years.

What?! I cry. Starting to wander the aisles in an aimless shuffle. It was six months before how’d it get all the way to seven years?! [I shouldn’t have to even ask the question . . . we lost the Motion to Suppress [the Truth], so of course the State OFFICIALLY has the upper hand now. It already had the upper hand, the stacked deck in its favor, as I’ve tried to convey. But to go from six months to seven years? Such a staggering leap! And it really, in my opinion more than anything else, proves that the prosecution knew it had a pitiful case.

This is emblematic of probably the biggest, most irreparable problem with America’s “Justice” System: Certain outcomes facilitate the advancement of political careers! Simply put, judges and prosecutors are literally rewarded for landing convictions. Given America’s general Tough on Crime ideology, careers in or arising from the legal system advance mainly on the strength of their conviction record. Rather than, say, based on experience alone. This ever-so-predictably-and-no-fuckin-duh! fosters bias. A despicable and unjust lean toward guilty verdicts and harsh sentencing. In an actual fair system, there’d be NO HINT WHATSOEVER of built-in reward or political gain for securing convictions. But as it currently works, everyone involved in the “Justice” System except defense lawyers inherently benefit from landing guilty verdicts or scoring plea deals. Think of it as generally analogous to traffic cops’ having monthly ticket quotas. They don’t result in overzealous and/or inappropriate ticketing in all cases. But they most certainly encourage an implicit predisposition toward meting out tickets in 50-50 scenarios, when it could go either way. The only element judges and everyone else involved in court cases should be concerned with is a fair examination of provable facts. A laser-fine focus on impartial analysis, without ever ever shunning objectivity in favor of a particular result.

That’s the best explanation for why, before the Motion to Suppress, they offered the now-unbelievable sweetheart deal of six months. The prosecution knew its case against me was shit; that it’d be relying entirely on proving the search and seizure was constitutionally justifiable. They knew the Motion to Suppress Hearing may well’ve allowed me to walk free. But they were yearning for that guilty plea—given the aforementioned benefits—and so extended me a ridiculously low offer. Knowing what I do now, I obviously should’ve flung myself onto the six-month deal. And I would have—had I been privy to a mere inkling of an idea that my plea deal would skyrocket if we lost the Motion! Irrespective of that permanent felony on my record. Of course, now this all seems so simple and easy-peasy. Hindsight etc.

There in the natural foods store, I’m trying to compose myself. To not physically crumble onto the market floor, sobbing. How . . . I say. How’d it go from six months to seven years?! But I already know the answer to that. Jim tries to comfort me: Bruce says with good time you’ll probably only serve about three years. But even that is utterly unthinkable. Three fuckin years; 36 months. I expected to get a year, maaaybe two. Oh christ. Oh man this is BAD. Quickly I thank Jim and hang up and rush outside as the full weight no that’s wrong not even the full weight yet but just some of the crushing weight of this news wallops me and I have to collapse on a picnic bench just outside the entrance so I don’t fall down jelly-legged, and there I slump now shaking and jam my face into my hands and start sobbing openly ostentatiously not caring just needing to let it flow sitting there in full view of customers walking in and out and loading their vehicles with groceries and no doubt staring at me some uncomfortable some saddened some probably amused remember this is American humans we’re talking about but I don’t give a shit I just hunch there trembling for real trembling not like Marlow-trembling i.e. not at all and sobbing terrified even more somehow than the last week so much Dread now not even gonna try and express it but merely sit there weeping and shaking and overcome by the horrorshow my life has descended into all because of one desperate poor choice on my part resulting from my disability and the System’s failure to help me even though I needed it so badly needed and yes deserved it too all the injustice and corrupt malignant bullshit of this society now come crashing down like a bunker-buster to wreak havoc on my dumb stupid shitbag life.