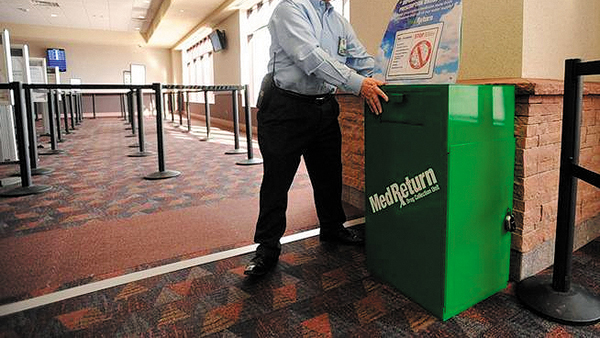 One of the many focal points of marijuana legalization in Colorado is the element of out-of-state travel in accordance with federal regulation of the substance — especially with the number out-of-state travelers coming to visit the state on the rise. Any person above the age of 21 may carry up to one ounce of marijuana on their person anywhere in Colorado, even on airport property, though it must remain in a car and not brought into the facility. But that’s where the lines of regulation begin to blur: airports operate within the state’s border, though aircraft are federally regulated. Denver International Airport has adopted more of a benign approach to traveling with marijuana out-of-state than of one based in punitive action.

“We have a tiered fine structure here at the airport, which acts as a deterrent,” said Heath Montgomery, Media Relations director at Denver International Airport. The Transportation Security Administration is federally assigned to deter terrorism and security threats to the aircraft and its passengers, leaving marijuana possession out of their area of concern, though it’s still prohibited on the aircraft. “If the TSA were to find something, they would contact the local authorities who would decide how to deal with it, though the police really wouldn’t treat it as a criminal instance,” Montgomery said. Though there has been an influx of travelers to Colorado since the legalization of marijuana, the issue of transporting the substance has yet to become a weighty matter with DIA or the Denver Police Department.

“We’ve had no noticeable uptake with the number of contacts with folks transporting marijuana since legalization, and along with the Denver Police, we’ve arrested nobody as of yet,” Montgomery said. This doesn’t mean there is an absence of repercussions for marijuana possession at Colorado airports, which is treated as a personal responsibility for each passenger to abide by federal regulations. “Under our process it’s a possible fine, and an administration citation by the airport,” she said. DIA hopes passengers will comply with federal regulations, which are displayed throughout the airport through signage informing the prohibition of on-board marijuana along with the usual prohibited items. Colorado airports and local police aim to prevent passengers from breaking any federal regulation, which has jurisdiction once the doors of the aircraft are closed.

“We just don’t want people to travel with their marijuana, so we ask them to throw it away before they go through security,” Montgomery said. Colorado Springs and Aspen airports have taken a further measure to keep passengers from becoming subject to Federal Aviation Administration laws by installing amnesty boxes to dispose of the marijuana. This allows passengers who may have forgotten to leave their marijuana in the car, or who may not realize it’s illegal to carry the substance on a flight to stay in the clear from any federal penalty. Local police oversee the amnesty boxes and destroy their contents upon retrieval.