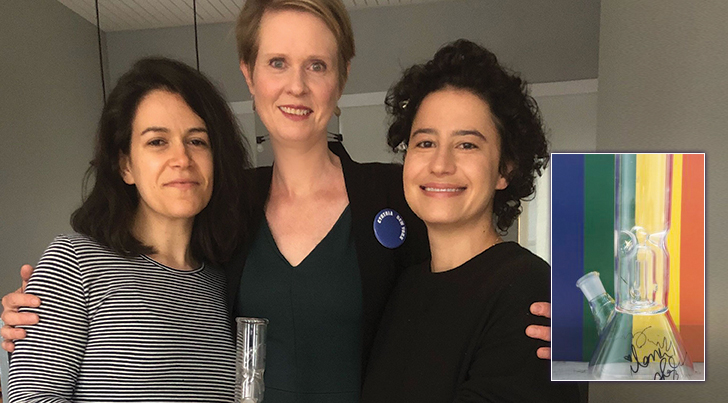 Cynthia Nixon is giving away a bong, but not just any bong – a bong autographed by Broad City’s Abbi Jacobson and Ilana Glazer. It’s a contest to help raise awareness about marijuana legalization and support Nixon’s campaign for governor of New York. Cynthia appeared in an episode of Broad City a couple of years ago as “Barb”, a manager working in Hillary Clinton’s NYC campaign headquarters. Hillary played herself in a somewhat surreal cameo that same episode. Perhaps it was part of what inspired her to pursue politics full time.

Broad City has been a cannabis savvy piece of pop culture since its debut and continues to have some of the more realistic and genuine weed references you’ll see anywhere on tv. Illana is the only character on television who regularly uses a dry herb vape, makes her own edibles, and casually mentions dabs or dabbing (baby steps). She makes a firecracker s’mores smoothie and Lincoln brings her a ‘ginger bluntman’. Sure, they occasionally take some unnecessary artistic license: Ilana’s hidden stashes never dry out or lose potency and Abbi kinda hallucinates too easily, but exaggerating for dramatic or comedic effect is normal enough. It’s also probably unfair to judge them from here in California since the show is set in New York, and maybe street dealers there will barter for office supplies or pizza in real life too – what do I know? We’re always at dispensaries out here, and that’s pretty much the point. Raise awareness for legalization so they can stop arresting New Yorkers who are forced to buy and sell cannabis in the park.

The “Broad City Bong Contest,” as it has come to be called, and Nixon’s campaign website states, “This may be a silly contest but it’s a serious issue.” Fans can choose to make a donation of any amount, but no contribution is necessary to win and a recipient will randomly be chosen. The contest was announced from Nixon’s Twitter account at 4:20pm on July 8th. Defense attorney Ron Kuby has said the contest was a “technical violation”, stating, “Cynthia Nixon by offering drug paraphernalia, as defined by federal law, could run afoul of federal law, but the lucky winner would not be. I would be thrilled to represent her pro bono should (U.S. Attorney General Jeff) Sessions and his band of trolls arrest her.”

Nixon’s competition and New York’s current governor, Andrew Cuomo, has been offering Billy Joel Tickets, declaring “Billy Joel” days, and getting lavish fundraisers hosted for him by.. That’s right: Billy Joel. Private fundraisers that start at $5000. That’s pretty expensive, especially when compared to Cynthia Nixon giving away a bong. Many Twitter users viewed Cuomo’s reliance on Billy Joel as seeming somewhat out-of-touch. Nothing at all against Billy Joel, we’re big fans, but “Piano Man” came out 45 years ago, and as of April 2018 59% of adults who are eligible to vote are Gen Xers, Millennials or “post-Millennials.” Andrew Cuomo has also traditionally been against the legalization of cannabis in New York, and only recently changed his stance (slightly) claiming that it “warrants more study”. It seems his change of heart only came after Miranda made marijuana one of her primary platforms. On her website, Nixon states: “80% of New Yorkers arrested for marijuana are black or Latino, even though they use it at roughly the same rates as whites. It’s time for NY to join 8 other states and DC and legalize the recreational use of marijuana.” She’s right, and this has been her main motivation for supporting the plant.

We’ll see what happens with the contest and the election. Watch “Broad City” on Hulu, Youtube, or Amazon Prime. To donate to Cynthia Nixon’s campaign – cynthiafornewyork.com. And for the Billy Joel fans: For tickets, tour dates, music and information – go to billyjoel.com.