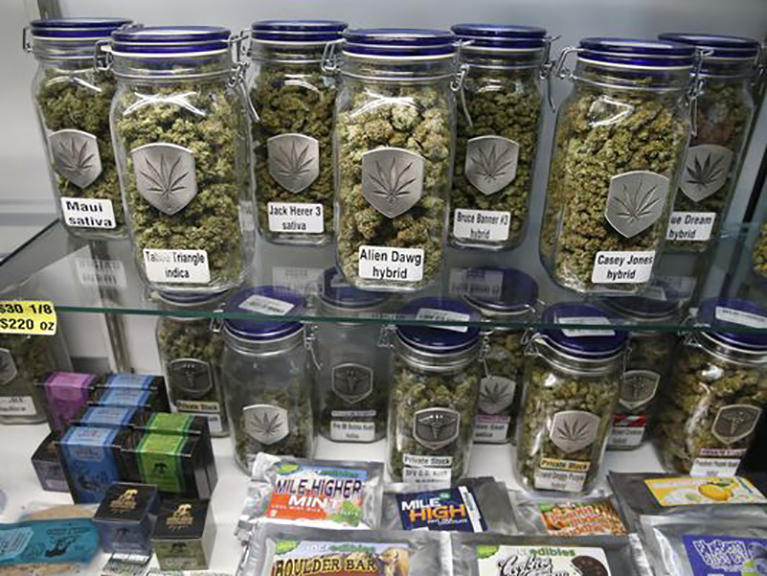 Sean Azzariti, a former Marine and two-tour Iraq veteran, became the nation’s first person to purchase recreational marijuana on January 1st, 2014. The transaction took place at a medical dispensary turned recreational store called, 3D Cannabis Center, in Denver. Azzariti, a budtender at Kind Love, a medical marijuana dispensary in east Denver, started on the road to advocacy while seeking out a more effective form of treating his own post-traumatic stress disorder. He began seeking treatment for PTSD in 2006. “I went to go see psychiatrists and doctors who prescribed me obscene amounts of prescription pills,” Azzariti said. “I realized if I started taking those pills I’d be pretty much useless. So I began to explore cannabis and how it could affect PTSD by doing my own research and what worked for me, and started noticing a lot of positive effects.”

It wasn’t long before he began advocating for the use of cannabis in treating other returning military vets. “I got in touch with the guys from Marijuana Policy Project, NORML, and Americans for Safe Access and started doing a lot of advocacy work with cannabis for veterans,” he said. His purchase consisted of one-eighth of an ounce of the strain known as Bubba Kush, and a THC infused truffle for $59.74, as the media surrounded him. Standing alongside him was his mother, who filmed the event with a pink smartphone.

Adding to his list of merit, reverence of fellow returning vets and notable support for legalization of marijuana, Azzariti was recognized for his continued efforts in contributing to the momentum of this monumental cultural change. “I was voted the most influential individual in 2012 by my peers of the entire Cannabis Business Association for the amount of advocacy work I was doing for veterans,” Azzariti said. “So they asked me if I wanted to due the huge honor of being the first person in the country to purchase recreational cannabis.” Given his new-found celebrity, Azzariti has garnered the attention of news outlets and talk shows around the world, from The Arsenio Hall Show to news publications as far away as Finland. However, he has remained steadfast to his roots of advocacy in helping returning Iraq and Afghanistan vets receive more effective means of treating their PTSD.

“In the last few years we tried three times to get PTSD added to the acceptable ailments for medical marijuana here in Colorado, and three times it got denied by the state,” Azzariti said. “We took that as real disrespectful that they wouldn’t acknowledge this. That’s why we went the recreational route, and pushed veterans with PTSD on the recreational side.” But for Azzariti the battle is far from over. “I don’t think the fight is over, and I’m definitely not done until this is available to everyone, not just veterans or those with PTSD. I think we have enough good and intelligent people in this movement right now to where we’ll leave a good example for other states and possibly other countries.”