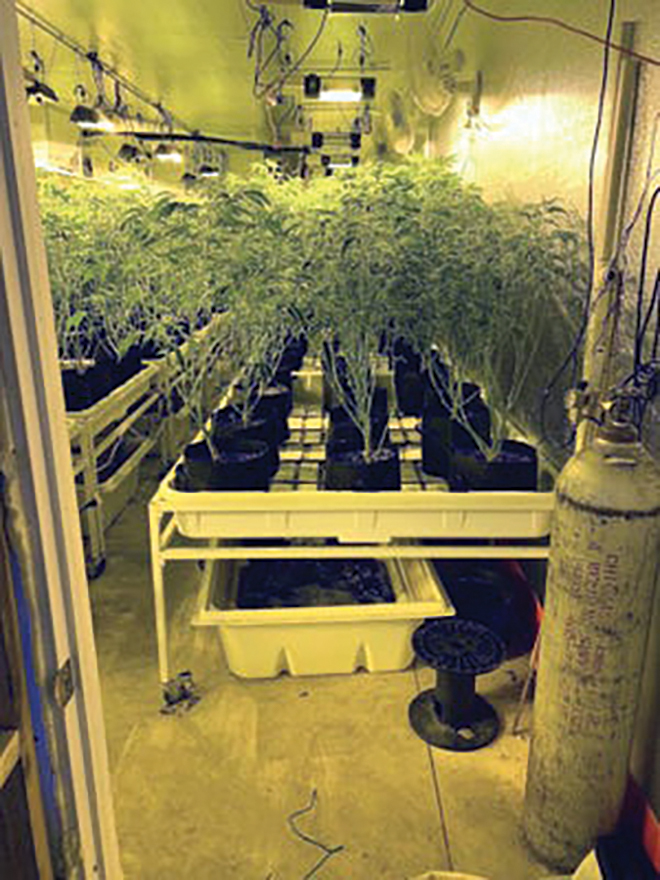 On February 22, 2022, the Oklahoma Bureau of Narcotics and Dangerous Drugs (OBN) conducted the largest cannabis-related bust in Oklahoma history, raiding nine licensed Oklahoma cannabis farms. They were raided because they were believed to have been diverting cannabis out of state. The raids also targeted three private residences in Edmond, Norman and Mustang, which are believed to have been used as cash and marijuana stash houses involved in the illegal shipments.

Gov. Kevin Stitt praised OBN and other law enforcement agencies for their actions, stating that about 140 members of the Oklahoma National Guard were called up to assist with site cleanup.

“Just two weeks ago in my State of the State, I told Oklahomans that bad actors have no place in Oklahoma. I said we will find them. We will hunt them down, we will bring them to justice. And that’s exactly what we’re doing today,” Stitt said.

Arrest warrants were issued for 13 individuals in Oklahoma, one individual in California and three in Texas. Five people have been taken into custody, and more arrests are expected as the investigation goes on. A woman who was arrested was described as a “very large target” who acted as a broker moving marijuana around the United States and out of the country.

OBN officials are blaming the licensed cannabis market saturation for illegal illicit-market sales and fraudulent business structures. Eight out of the nine farms were licensed and in good standing with OMMA.

“For over a year, OBN has been targeting numerous individuals and organizations that have moved to Oklahoma from out-of-state and used fraudulent business structures and ‘ghost owners’ to obtain their Oklahoma Medical Marijuana licenses,” said OBN spokesman Mark Woodward. “These criminals try to blend into our state’s medical marijuana program while trafficking marijuana onto the illicit market around the United States, laundering money and moving millions of dollars in illicit drug proceeds overseas.”

Woodward continued, “We are sending a clear and powerful message today that Oklahoma is not a safe haven for criminals who think they can hide behind a medical marijuana license. My agency is committed to aggressively targeting and dismantling these marijuana trafficking organizations that threaten the safety and well-being of our citizens and the law-abiding marijuana businesses in our state.”

He also stated the investigation identified brokers moving millions of dollars worth of  marijuana from multiple Oklahoma farms onto the illicit market in California, North Carolina, Missouri, Indiana, Texas and possibly other states.

100,000 plants and over 2,000 pounds of processed marijuana were confiscated. OBNDD also intends to file asset forfeiture cases against vehicles, bank accounts, cash, equipment and at least eight of the properties involved. Those arrested in this operation face a variety of charges, including aggravated trafficking and aggravated manufacturing.

During a press conference, hours after the 8 a.m. raids began, OBN Director Donnie Anderson said the farm workers would not be targeted for arrest.

Anderson said the agency tries to make sure that if there is any type of human trafficking that’s going on, OBN offers services, talks to the individuals, identifies who they are and then lets them go. OBN plans to continue investigating hundreds of suspected illegal marijuana growing operations throughout the state.

“To our current licensees, let this serve as a warning: If you are engaging in criminal operations, your actions will not go unnoticed,” OMMA Director Adria Berry said. “We are joining forces with other law enforcement agencies, bolstering our enforcement and inspection procedures, and preparing to implement a seed-to-sale tracking system that will make it even more difficult to take advantage of this industry or jeopardize the safety of our fellow Oklahomans.

“I take our public protection mandate seriously, and I have directed my staff to capitalize on any opportunity to take down the bad actors that exist within this industry,” Berry said.

The largest farm raided was Big Buddha Farms in Wilson, south of Oklahoma City. Drone video of the raid released at the press conference showed a convoy of police vehicles descend on the 80-acre farm as officers began searching some of the more than 500 structures on the premises.