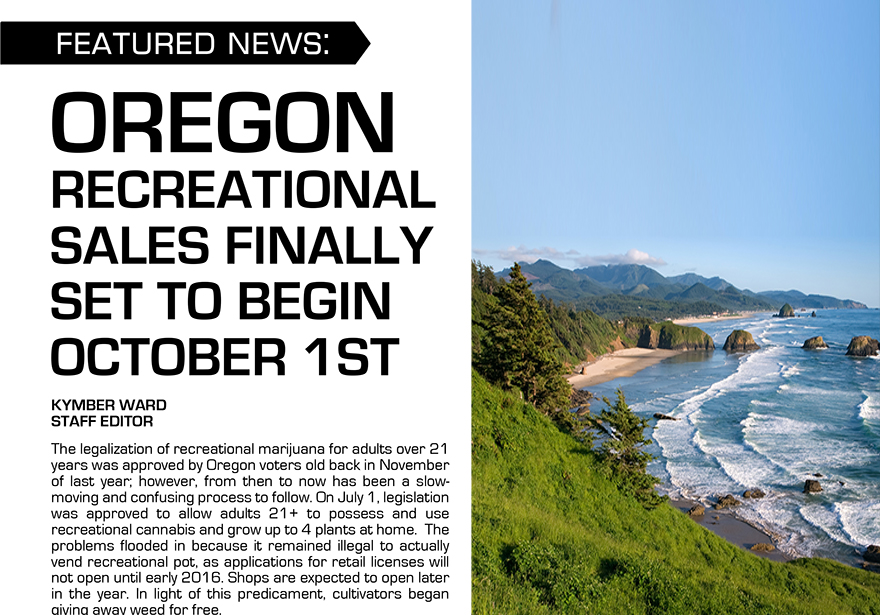 The legalization of recreational marijuana for adults over 21 years was approved by Oregon voters old back in November of last year; however, from then to now has been a slow-moving and confusing process to follow. On July 1, legislation was approved to allow adults 21+ to possess and use recreational cannabis and grow up to 4 plants at home. The problems flooded in because it remained illegal to actually vend recreational pot, as applications for retail licenses will not open until early 2016. Shops are expected to open later in the year. In light of this predicament, cultivators began giving away weed for free.

Less than a month after the ‘free weed rule’ was implemented Gov. Kate Brown signed a bill allowing medical marijuana dispensaries to sell a limited amount of recreational weed to any person over the age of 21. The bill permits 7 grams of dried cannabis may be sold to anyone with a valid ID. The Huffington Post published a statement from Kristen Grainger, Brown’s spokeswoman, stating the bill is a “smart solution to a short-term logistical problem.”

Cannabis infused products including topicals, edibles, concentrates will not be available for sale until the recreational stores open. The Oregon Liquor Control Commission OLCC, is still trying to figure out the best way to make sure any cannabis sold in Oregon will be grown in Oregon. Oregon legislature implemented earlier recreational marijuana sales due to being afraid that the number of medicinal patients reselling cannabis on the black market would skyrocket.

Some critics fear that mixing recreational with medicinal programs will cause friction and ultimately end the medical program much like Washington State. It is important to keep the medical programs open for true patients who use cannabis not for enjoyment but to help their quality of life. It remains to be seen if this will help the cannabis market or hinder the expansion as some critics fear, but for now it is a waiting game until October 1 to see what ultimately will happen.