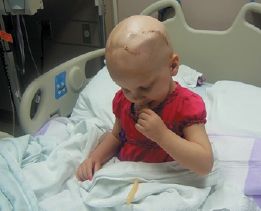 Dahlia Barnhart is only three, but has seen more hospital visits than most adults. She was diagnosed with a rare and aggressive form of brain cancer last year, and her mother, Moriah, has moved the family of two from Florida to Colorado to allow Dahlia to receive CBD treatments for the disease. An accumulation of symptoms that didn’t add up alerted a mother’s instincts that something was wrong with Dahlia. She never slept more than 2-3 hours her entire life, doctors tried to diagnose her with ADHD, she was unstable which they attributed to growth spurts, she had headaches and tremors (extremely abnormal for a baby), and was vomiting for a day and a half before she took her in to the ER. It was there she told the hospital she thought Dahlia had a seizure, knowing that she would get a CAT scan immediately, and sure enough the scan showed a huge mass in her brain.

The War on Drugs is Killing our Children

Upon the initial CAT scan, the pressure was such that it was enough to cause permanent brain damage, so an external drain was done at the time of the biopsy. Because of the size of the tumor a partial tumor resection was performed immediately to release the pressure in Dahlia’s brain. Diagnosed by six different hospitals, in June 2013 they went to St. Jude’s Hospital in Memphis, Tenn., which had given the most aggressive diagnosis. There were obvious developmental delays from the surgery itself. Dahlia was prescribed drugs to treat the side effects of other drugs. “When you see your child being prescribed these very dangerous and deadly medications, you become very desensitized to the initial stigmas associated with any medication. And you get to a point where you’re reaching out for anything that’s safe and effective.” In this most heart breaking story, our hero ends up being the vigilante hemp plant in which “CBD” (Cannabidiol) is found.

There are at least 85 known cannabinoids in the cannabis plant, CBD being the second major constituent next to THC (tetrahydrocannabinol); however CBD is non-psychoactive and is shown to have a wider array of medical applications than THC. Containing less than 1 percent THC, the CBD oil made by HempMeds Px being used to treat Dahlia, can legally be shipped across state and international borders. “Morphine comes from the opium plant, it’s a dangerous and deadly medication. Tons of medications in our society are made from plants that are toxic plant extracts. I’ve always believed, and as the Bible says, plants are made to nourish and heal.” Moriah conducted hundreds to thousands of hours worth of research on her own, going as far as contacting scientists and researchers on the government payroll. She discovered trustworthy information from many extremely educated sources before she really decided that this was something that would ease Dahlia’s quality of life but also something that could give her [her] life back. She herself does not use cannabis, she says she’s the one in a million that adversely gets affected by it in a negative way that is anxious and not enjoyable for her at all. When asked if she uses marijuana, she says, “I also don’t use her morphine, her chemotherapy, or any other drugs that she needs.”

Moriah says, “The saying, ’The weight of the world is on your shoulders,’ is brought to an entire new level. The idea that the life of your children is in your hands, is more real to me now than I think it could be in any other time of your life. My baby’s life is my only priority today.” Moriah recently relocated from her hometown in Tampa, Florida to Colorado Springs, Color., for safe access and consequence-free options for Dahlia’s treatment. “It seems criminal that we have no rights in the care of our children.” Family and friends have been extremely supportive of her move and her decision to use CBD oil as treatment for Dahlia. There isn’t a person who cares about her who doesn’t want her quality of life to improve. When asked what Dahlia’s doctors say regarding the use of CBD oil, she says they all say “It’s federally illegal. No surgeon or doctor with any government hospital affiliation is going to discuss the issue.” She reached out to HempMeds Px when she found out that CBD had been patented by the United States government as a neuro-protectant.

Chemotherapy poses the risk of brain damage, but Moriah was most worried about radiation, which causes severe brain damage. “Knowing that CBD is non-psychoactive I knew there was a way I could get my hands on it. It’s shown to repair brain damage, and help with neuropathy.” Dahlia’s CBD oil intake consists of a gram a day split up between 2-3 doses. The very first day she took CBD oil she slept through the night for the first time in her life. She woke up the next day hungry and rested. It was like the medicine she was so desperate to get her hands on was working like a miracle drug overnight. “I noticed she was thirsty, which along with nutrition is so important for getting through the chemotherapy. I was convinced it was something she needed. It seems she transformed into a normal 3–year old overnight. Eating, drinking, playing, and sleeping.”

She’s no longer on morphine, but still on chemotherapy. Moriah has chosen to use the CBD oil as a supplement to Dahlia’s mandated medications, rather than relying on it as a miracle cure. Moriah petitioned the Obama Administration early on to make access available to the medicine, shocked to find she had very little options. During the government shutdown it was taken down twice. If Florida’s Supreme Court puts a medical marijuana measure on the ballot it will be voted on by the people later this year, November 2014. “It’s a plant that grows out of the ground, and it’s safer than most other drugs. Its benefits have been known for thousands of years, and I thank God every day for the opportunity for my daughter to have quality of life,” she says. It’s a supplement that she potentially plans to give Dahlia for the rest of her life, only time will tell. In five years she hopes that the Federal prohibition on cannabis gets lifted. “The war on drugs is seen for what it is, which is: it’s killing our children.

Absolutely trust your gut and instinct, and what you know is right for your child. Politicians are not physicians. We have a right to provide happiness and health to our children. Any parent than can understand that to watch your child get sick, and then watch them continuously suffer every day, understands that there are no words for that.” Moriah feels betrayed by her own government, telling her what she can and cannot do. Even if she didn’t need the medicine or chose to utilize those resources, it is very important to have the options. “I didn’t fully understand this plant prior to being forced to turn to it with no other options.” “Please don’t judge until you’ve done your own research. Look hard into the other medications to the elderly or sick; it’s much safer and more effective than any other medication we have out there today. Anyone that believes FDA approved medications, or psychotropic psychiatric medication that causes 7-year-old to hang themselves is beneficial, should be open to the scientific facts that CBD oil helps repair brain damage.” So in this battle,we salute Cheryl Shuman, HempMeds Px, and the State of Colorado with the support and access made available to Dahlia to improve her life.

To donate or find out more how you can help go to: