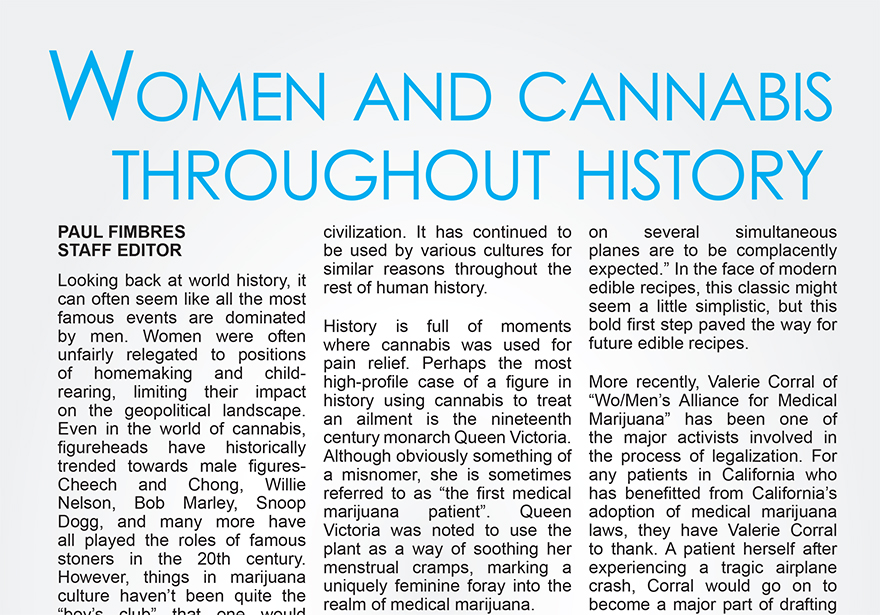 Looking back at world history, it can often seem like all the most famous events are dominated by men. Women were often unfairly relegated to positions of homemaking and child-rearing, limiting their impact on the geopolitical landscape. Even in the world of cannabis, figureheads have historically trended towards male figures- Cheech and Chong, Willie Nelson, Bob Marley, Snoop Dogg, and many more have all played the roles of famous stoners in the 20th century. However, things in marijuana culture haven’t been quite the “boy’s club” that one would assume at first. As it turns out, there are a number of cases in the advancement of cannabis as a medicinal and recreational tool where women either beat men to the punch, or discovered entirely new fields of benefit and purpose.

Going back to the dawn of human civilization, childbirth has been a historically deadly and painful activity. Even today, in the era of powerful modern medicine, a standard pregnancy epidural is little more than an injection of morphine. The ancient Egyptians has something a bit more natural for their child birthing medicines- salves made from cannabis. These concoctions, noted for their ability to induce contractions and relieve pain, were literally involved with and aided in the birth of modern human civilization. It has continued to be used by various cultures for similar reasons throughout the rest of human history.

History is full of moments where cannabis was used for pain relief. Perhaps the most high-profile case of a figure in history using cannabis to treat an ailment is the nineteenth century monarch Queen Victoria. Although obviously something of a misnomer, she is sometimes referred to as “the first medical marijuana patient”. Queen Victoria was noted to use the plant as a way of soothing her menstrual cramps, marking a uniquely feminine foray into the realm of medical marijuana.

Have you ever heard of a pot brownie being called an “Alice B. Toklas”? Although the term has fallen out of favor in recent years, Alice Toklas brownies still hold a special spot in the hearts and minds of a number of people. The name comes from Alice B. Toklas, the unofficial wife and life partner of San Francisco Bay Area literary legend Gertrude Stein. Toklas, in her septuagenarian years, published a cookbook in the late 1940’s, a cookbook that just happened to contain the first-known published recipe for cannabis-based brownies. Recommending it for women’s club meetings, rainy days and poor weather, the recipe noted “Euphoria and brilliant storms of laughter; ecstatic reveries and extensions of one’s personality on several simultaneous planes are to be complacently expected.” In the face of modern edible recipes, this classic might seem a little simplistic, but this bold first step paved the way for future edible recipes.

More recently, Valerie Corral of “Wo/Men’s Alliance for Medical Marijuana” has been one of the major activists involved in the process of legalization. For any patients in California who has benefitted from California’s adoption of medical marijuana laws, they have Valerie Corral to thank. A patient herself after experiencing a tragic airplane crash, Corral would go on to become a major part of drafting both Proposition 215 (The Compassionate Use Act of 1996) and State Bill 420, which any California patient will recognize as the two backbone bills of the entire medical marijuana system in California.

Although it might have seemed at first that cannabis was the sole purview of men, it’s pretty obvious that history is a lot more complicated than the big stories would first present. Women have been present for the history of cannabis, helping to shape its presence and growth since time immemorial. And, of course, going forward, we hopefully have little to worry about in the field of gender egalitarianism and cannabis. Both men and women have plenty to contribute, and we expect the best.