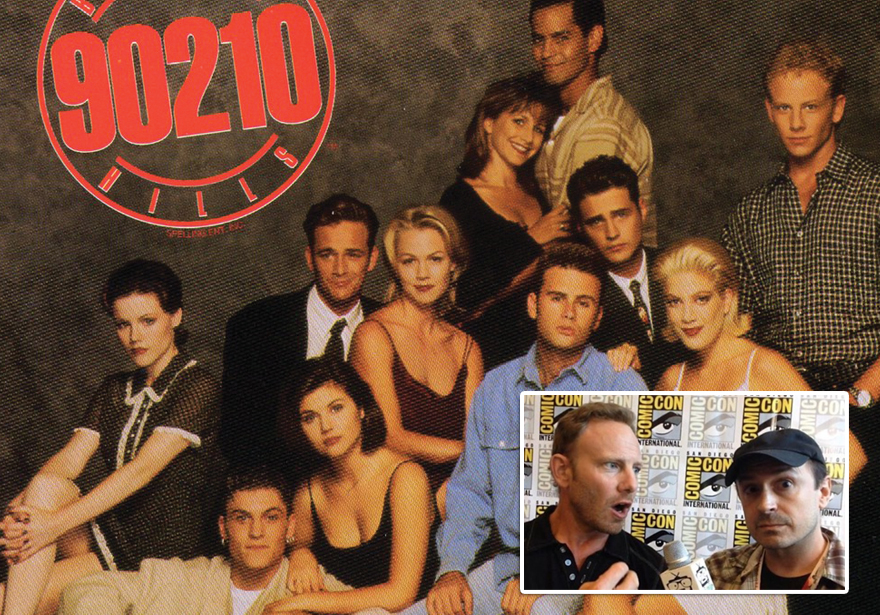 When I saw the promotional ad for the new 90210 show, I didn’t actually know what I was seeing. Honestly I think I thought it was a commercial for a phone or something like that. I knew that older tv shows were getting released on streaming platforms constantly so maybe it was connected. Pretty sure I remember being aware of them rebooting the series and maybe I thought it involved the children of the original characters or the old actors were now teachers? Might have had it mixed up with something else and the late, great Luke Perry’s role on “Riverdale” only confused the issue. Wasn’t exactly on my cultural radar much, but just enough that I feel like I can review the first episode of the newest series without checking any facts or references on the internet. It seemed more interesting to see what I could remember about the show as well as the cast of Beverly Hills 90210.

In the old series, I don’t actually remember any of the original characters smoking weed. Maybe they did but I never saw it. It wasn’t until Tiffani Amber Thiessen’s character Valerie Malone entered the scene around the 5th season that we got some actual on screen marijuana use. She may have been straightlaced as Kelly Kapowski at Bayside High but Thiessen was flexing her acting chops by turning heel when she transferred to the new zip code and show. Viewers immediately knew she was a bad girl and a druggie because she lit up a moderate sized joint as soon as she arrived and smoked it indoors! Brandon was once pulled over with Valerie’s stash in the car and the gang flushed her weed down the toilet because she wouldn’t stop, doing what Steve Sanders referred to as, “puffing on a huge Marley”, inside the Beach House they were all staying in together. She helped Dylan to run away from rehab, skipped his intervention and gave him a reefer when he was at his lowest bottom. Dylan wasn’t able to fire up and roast the bone because it was windy on the beach. Thank goodness, it’s like divine intervention making up for the intervention Valerie skipped.

Unfortunately, it looks like Thiessen might be too busy for the new 90210 remake, or reboot. Re-imagining is maybe the best way to say it. She’s on a Netflix series called “Alexa & Katie” and had a cooking show right before that so I’m sure she’s doing fine. Aside from Luke Perry, may he rest in peace, Ian Ziering is really the only other cast member I was still aware of and that was 100% due to his role in the Sharknado series of movies produced by The Asylum. Brian Austin Green seems like he shows up in something every couple of years. I think he was actually smoking a joint in the movie, “Domino” starring Keira Knightley, where he and Ziering played fictionalized versions of themselves on a reality show within a fictional show — which is exactly what this new 90210 show is. So Brian Austin Green isn’t married to Megan Fox. Instead he’s married to someone else who has Megan Fox from 2008 level fame. And Tori Spelling is married to someone I’ve never heard of instead of someone else I’ve never heard of. And she has a fake reality show different than the one she really has that isn’t real. If you loved the original series, maybe you’ll like this. It’s weird and kind of like the 90210 equivalent of “Entourage” crashing into “Curb Your Enthusiasm” but without any of the production value you see on HBO.

At one point later in the first episode, the always charming Kelly Taylor, I mean Jennie Garth, says she’s not worried and doesn’t care because she ate an edible earlier in the day. It’s an awesome little thing to say that receives zero judgement and is treated completely naturally and totally casually, at least by fictional Tori Spelling anyway. I couldn’t help but wonder what kind of an edible it was? Did she make it or buy it? Was it savory or sweet? Is Garth a micro-doser or a macro-doser and is real life Garth medicating as often as fictional reality show Garth is? If I decide to keep watching this show I can only hope these questions get answered but I’m assuming they probably won’t be.

I thought this whole thing was a made for Hulu web series but apparently it’s a prime time show on the Fox Network, just like the original 90210 was. Maybe next time Jennie can get edibles for everyone. Maybe Tiffany Thiessen can bake them and make a cameo. We can hope. Until then, Party on Garth, and thanks for the positive mainstream representation.