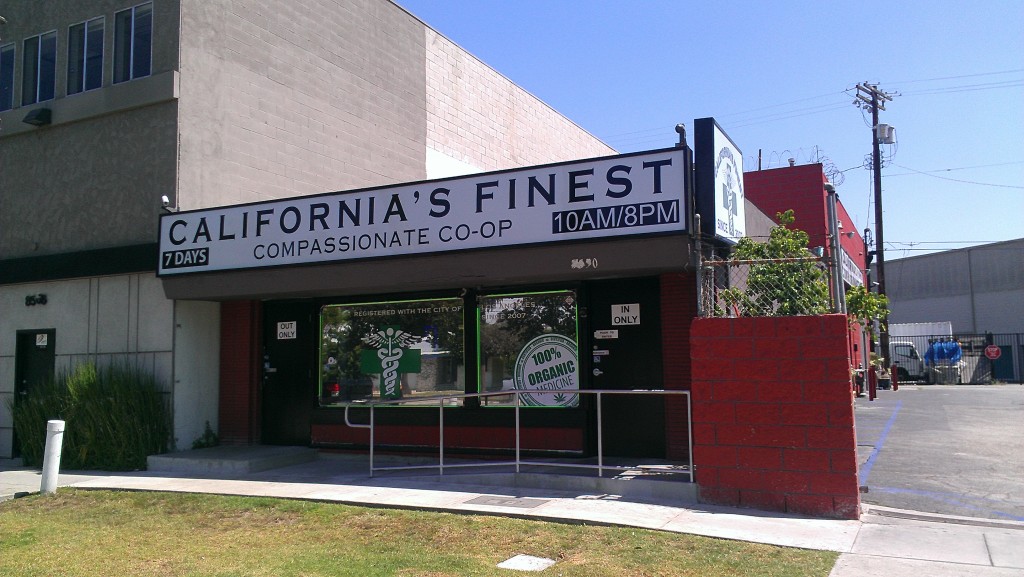 Located just outside of Culver City, in West Los Angeles California’s Finest Compassionate Co-op is known as the friendly collective. Cali’s Finest LA, was founded in May 2007. It’s a family run business that has exceeded the premise of what a medical marijuana collective should be.

The co-op started out in a tiny room with one budtender and one security guard and over six years has expanded to a full-service dispensary that serves it’s members day in, day out. Rain or shine. On a daily basis they carry 28 different strains that cater to all patients from the dedicated high-end patient to the patient on a tight budget. I became a patient of Cali’s Finest LA back in July 2008. I immediately noticed that the staff was much nicer than any shop I had ever been to and they were extremely knowledgeable of the products they had in stock. Over the years the prices have dropped and the dispensary has increased it’s efficiency in its space and product.

One of the best things about Cali’s is the ability to try new strains for as little as half gram donations as well as being able to split eighths if i cannot choose between the two. Not feeling pressured to donate a larger amount when I don’t need it, or I’ve never tried it and I don’t understand how the medication will affect me is key. California’s Finest is a Pre-ICO “Interim Cannabis Ordinance,” which means that they were registered and approved by the city of Los Angeles before September 2007.

They are also GLACA members which is the “Greater Los Angeles Caregivers Alliance,” Americans for Safe Access (ASA) members, CA NORML, members and a member of the local 770 Food Workers Union, a national Union that includes local grocery stores and pharmacies (the only union for medical marijuana industry workers). California’s Finest was also instrumental in raising the funds for the referendum that postponed the LA Ban on Dispensaries in September of 2012. It was this referendum filed in the Los Angeles city clerk’s office and getting the signatures needed that prompted the May 2013 city wide vote on the cannabis ordinances in which Proposition “D” was passed, and will be enforced in December.

With products that are properly labeled, packaged, and displayed, there’s no guess work involved. Especially when every strain is weighed out directly in front of you. Knowing this when you walk into Cali’s Finest, not only do you immediately feel that you’re in a secure environment but upon entering the dispensary portion, you can tell they are all about the patients yet handle business very professionally. Since I’ve found Cali’s Finest LA I have not had the need to go anywhere else, it’s no wonder they were selected for the Collective of the Month Feature.