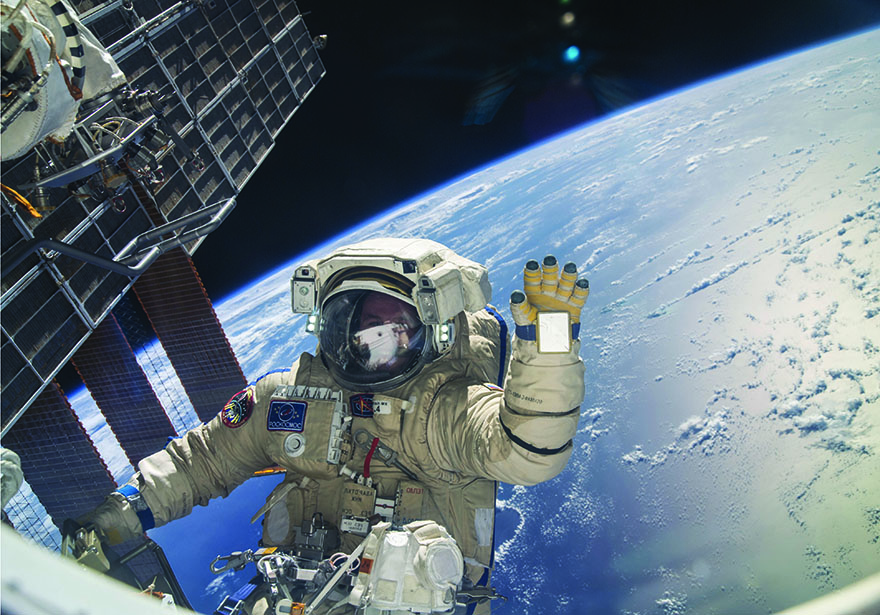 Growing Cannabis in a spacecraft? This utilitarian plant was critical to past exploration being used as canvas and ropes on old sailing ships. In future outer-space travel, Cannabis is poised to ride again.

But why grow weed in a spacecraft? Aside from the benefit of oxygen regeneration and water purification – Cannabis is a robust domesticated food source, easily cultivated, producing raw material for items from pharmaceuticals to textiles and structures. But let’s face it, a good high in microgravity would be a welcome non-toxic stress reliever for anxious people suffering from space-sickness, as well as the overall relaxation and health benefits. If current theories hold true, fruit production should increase in low gravity. Moreover, broken stems due to heavy buds would no longer be an issue. Without the force of gravity the plants energy is available for more and better flower production, resulting in giant trichrome covered buds. Although you can live quite well eating those delicious Space Food Sticks TM, NASA does acknowledge plants for long-term space travel are required for both fresh food production, as well as, human psychological well-being. However, only one small experimental plant growth unit exists on the International Space Station. Future plants in spacecraft will no doubt draw on the expertise from the stealth marijuana grows. Ganja growers have answers to the problems space companies will face. Affordable and reliable technology off the shelf, built for the indoor grow industry.

Pioneered in the late 20th century by illicit growers, clandestine and unseen gardens required tight confines. The challenging close restrictions faced by these brave people were almost insurmountable. Many a crop and grower was lost due to numerous trial and error situations (not to mention bad plea deals). As the years progressed, valuable knowledge was hard gained. Slowly, a consistent quality of equipment and supplies saw the indoor growing industry bloom. Homegrown hydroponic previously considered low quality, soon became the top notch standard obtaining an almost holy status. The best growers in the world were the closet growers and they were making
absolutely awesome produce.

“The hard truth is that interplanetary spacecraft travel and colony formation is not going to be easy nor clear-cut as the picturesque
rendition of
current plans.”

Critical issues with small space agriculture have been solved by these innovative closet growers. Entire markets have sprung up around small-scale indoor growing. Extremely practical techniques for growing have been developed by this proud, yet shunned, subset of the horticulture community. More efficient than the scientific plant growth chamber, Cannabis grow rooms have been engineered for production over data collection. Ganja grow room designers have clearly become indoor agriculture’s most productive caste – a clear match for the requirements of space farming. The physical spacecraft plant growth chamber will most likely have systems, methods and technology developed by these indoor Cannabis growers. From nutrients, lighting, temperature/humidity control to air movement the subsystems will all be similar to an individual grow closet. The largest issue with growing Cannabis in a spacecraft might be the sheer size required and the restrictions inherent in current spacecraft design size. Solutions include dwarf varieties, perhaps less time in vegetative growth for smaller final plants – or we may just need a bigger ship (see futurist Issac Arthur).

It will not be easy however. Serious and far reaching problems are associated with growing plants without much gravity. Water forms a thin film on stems and a suffocating coat over leaves if not properly contained. Providing Oxygen to the root zone and water removal from the shoot zone are two stark examples of difficulties without gravity. Radiation exposure and a host of other unknowns have yet to be examined for interplanetary voyages. Hardcore engineering is still needed to address important kingpin issues regarding plant growth for space survival. The Cannabis community can help. As the negative stigma about Cannabis slowly fades, assistance from these experienced and competent growers will become commonplace. Any near-term spacecraft (or colony) grow chamber is going to look very similar to Cannabis stealth grow rooms from the past century. Importantly, just like with the explorers of old, among the plant types brought, there will be a selection of Cannabis.

Good techniques are well worth repeating. Tap that knowledge of old if you want to – not just grow – but, Thrive!

Professor Dale J. Chamberlain is a former NASA plant scientist and Dean of the High Altitude School of Hydroponics (H*A*S*H). Also a writer and health system nutrition specialist, his book Aromatic Cannabis Cultivation; A Growers Guide to Great Ganja can be found online at https://www.amazon.com/Aromatic-Cannabis-Cultivation-Growers-Guide-ebook/dp/B01DWURSAE