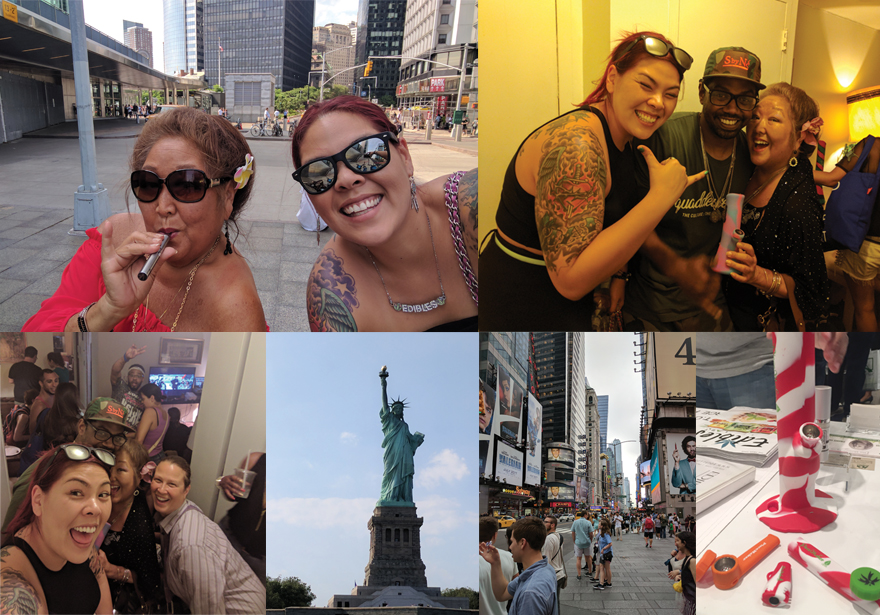 The New York is the fourth most populated state in the US. Most trends of food, fashion, politics and social standings are generated and influenced between East Coast New York and West Coast California. But when it comes to cannabis, there is a sad degradation and breakdown of impact upon the New Yorkers. California led the way back in 1996 with medical cannabis by passing Prop 215. Soon, other West Coast States followed suit such as Oregon, Washington and Colorado which are all now recreational. Now pending is the recreational roll out for California which is due for 2018, but the East Coast New York has dulled by comparison.

A demise has been the slow moving train and the subways of the city are frustrating to visitors coming the Big Apple. Recently, Edibles Magazine had the pleasure of being in Manhattan for the Cannabis World Congress and Business Expo. What business? The people are willing, the industry is getting ready, but legislation is at a standstill for any recognition of patient care and medical cannabis, much less for recreational. Intellectually, many governors have been influenced by Colorado, Washington, Oregon and now sister states of New Jersey, Maryland, DC, Massachusetts and even petite Rhode Island are moving like a New York yellow taxi on the ExpressWay!

At this time, there is only 10,500 Cannabis Medical Cards that have been given out in the population of close to 20 million residents. While in comparison, Michigan has over a quarter of a million medical cards. What you can do in New York if you have one of these limited Doctor’s Recs? If you are one of the 10,500, you are able to purchase and use oil, vape and capsules, that’s it! Absolutely no flower, or edibles are allowed at this time! You must be in a doctor’s care with the following health issues: Cancer, HIV/AIDS, ALS, Parkinson’s, MS, Spinal Cord Injuries, Epilepsy, IBD, Neuropathy, Huntington’s Disease, and these diseases must be accompanied by other server factors in order to receive a medical card. I am getting ill realizing the severe predicament of New York residents and their access to medical cannabis!

But an invitation to a “Private Secret Sesh” took place with some of the top edibles companies in the 26 mile island of Manhattan while in NYC. The special guests were the none other than the publisher of Edibles Magazine, B. Le Grand, Ms. Julie from NJ, and yours truly. We were so honored to have these dedicated industry members share the edibles of Manhattan with us. It was “Sesh In The City”, but I left my Manolo Blahniks at the door as we did have to take off our shoes while in a High Rise in Harlem. On hand at the NYC Sesh were Gummy Goddess, Hippie Treats, Sour Puff Boys, Brooklyn Chews, Cannabakez, Healing Rose, Adventures of Marvin Jane and Piece Maker Gear and many others who wish to remain anonymous. Can you blame them?

We would love to name all the amazing individuals who make up this hard working, envelope-pushing group who just want to envision cannabis commerce for NYC and the rest of the state! But if I did name them all, I could be blowing the cover of the under-the-cover edibles businesses. Some were established with great packaging, testing by way of California, while others were just brand new and seeking to find their place. Others had it down on the Big Apple Black Market and partnered with other brands to unite in the Gangs of New York-style delivery. Admirable, frustrating and at Edibles, our heart goes out to them. Of course, our visit was to taste and appreciate everyone’s wares, all 20 tasty treats as we were to some the experts of edibles. OK, at the end of the night, I admit I almost left my shoes and I did leave my cell phone. Oh, so Carrie Bradshaw as our “Sesh In The City” was another epic day in New York City. So Governor Andrew Cuomo, listen up! The people are speaking like the rest of the country and your constituents are demanding full access to cannabis. It’s up to you, New York, New York as Frank Sinatra croons, of course, after eating a Manhattan Edible! Love you, New York and thank you to Ms. Julie NJ, Tarik and Steve.