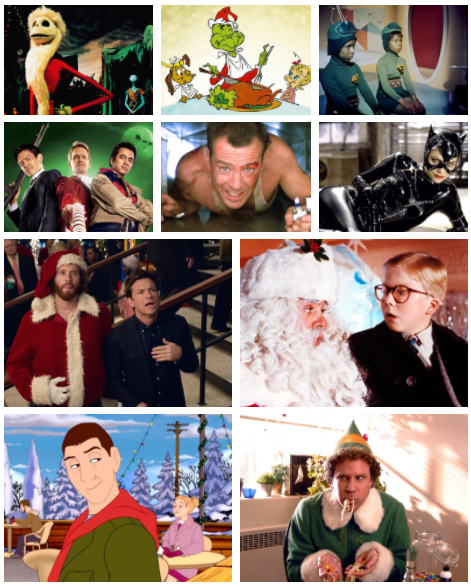 You want to get medicated and watch holiday movies this season but don’t know where to start? Well, we did the heavy lifting by putting this list together so all you need to do is break out the edibles, roll up the blunt, fire up the dab rig or whatever, and kick back, get lit and press play. Notice an absence of all that Rankin and Bass stuff? THAT’S RIGHT! No Frosty, Rudolph or Charlie Brown. This is our list and it’s best viewed infused. There’s a nice diverse mix here, so light up and enjoy the The Edibles List of the Top 10 Films to Watch While Medicating this High HoliDAZE season! You’ll want to have plenty of munchies on hand and by the way, there’s no order to these, only chaos. Enjoy!

The Nightmare Before Christmas

The Nightmare Before Christmas is a groundbreaking 1993 stop-motion animated musical dark fantasy film produced and created by Tim Burton. It tells the tale of Jack Skellington, a resident from “Halloween Town” and the King of Halloween who stumbles through a magic doorway to “Christmas Town” and decides to celebrate/appropriate the holiday, with some hilarious and terrible results. Oingo Boingo’s Danny Elfman wrote the songs and score, and provided the singing voice of Jack. A modern, gothic holiday classic, celebrated everywhere, including all Hot Topic stores.

Dr. Seuss’ How the Grinch Stole Christmas! is a 1966 Christmas animated television special directed and co-produced by the always amazing animator Chuck Jones. It’s based on the children’s book by Dr. Seuss, the story of the Grinch and his dog Max trying to steal Christmas from the people of Whoville who live down below his mountain hideaway. Originally telecast December 18th, 1966, it went on to become a beloved holiday special. This cartoon also features the voice of the legendary Boris Karloff as both the Grinch and the narrator. Do yourself a favor and don’t accidentally watch the live action remake from 2000 starring Jim Carrey and directed by Ron Howard, it’s pure nightmare fuel.

Santa Claus Conquers the Martians is an absurd 1964 science fiction comedy holiday film starring John Call as Santa Claus, and features an eight year old Pia Zadora as one of the Martian children. This crazy low budget  film took on newfound fame in the 1990s after being featured on an episode of Mystery Science Theater 3000 and has since found new life again, after recently being a holiday feature with RiffTrax Live. It’s best watched with the Rifftrax or MST3K commentary, which makes it seem like a brilliant comedy, because otherwise it’s slightly unwatchable. Extra medicine highly recommended.

A Very Harold & Kumar 3D Christmas is a 2011 3D stoner comedy Christmas film starring John Cho, Kal Penn and Neil Patrick Harris. It’s the third installment of the Harold & Kumar series. The plot follows Harold and Kumar, 2 estranged cannabis loving friends who go on an adventure to find a new Christmas tree after Kumar destroys the original. Created by stoners for stoners and a solid third film in this likeable trilogy. As always, NPH steals the show portraying a fantastical version of himself. WWNPHD?

Die Hard is a 1988 action/Christmas film directed by John McTiernan. It follows off-duty New York Police Detective John McClane (Bruce Willis) who is caught in a Los Angeles skyscraper (Nakatomi Plaza) during a heist led by terrorist/thief Hans Gruber (Alan Rickman) at an office holiday party on Christmas Eve, and considered a modern Christmas time classic by many top critics. It’s the movie that made Willis a movie star (for better or worse), is slightly responsible for Planet Hollywood, and also has a lot of Christmas music and good quotes in it. Most importantly, it has Alan Rickman doing some of his very best work and playing the greatest villain in holiday movie history.

Batman Returns is a 1992 vigilante superhero/Christmas film directed by Tim Burton, based on the DC Comics character Batman, “The Dark Knight.” It’s the second installment of Warner Bros.’ original Batman film series, with Michael Keaton doing a stoically bang up job reprising the role of Batman/Bruce Wayne. The film also stars Danny DeVito as the Penguin, Michelle Pfeiffer as the world’s all time most magnificent Catwoman, and Christopher Walken in his greatest and most quotable performance ever as corrupt Gotham City business tycoon Max Shreck. Batman Returns is set at Christmas and has a heavy holiday theme plus a cameo by Pee Wee Herman. It also includes the best dialogue about mistletoe in the history of cinema. Our vote for most memorable and stylish Batman movie ever made.

Office Christmas Party is a 2016 Christmas comedy film directed by Josh Gordon and Will Speck. The film stars an ensemble cast, including Jason Bateman, Olivia Munn, Kate Mckinnon and the always stoney T. J. Miller. When the CEO tries to close her hard-partying brother’s branch, he and his chief technical officer must inspire their co-workers and throw an epic office Christmas party in an effort to save their jobs. This is an old school “wild party” movie with a bit of a throwback style in a very 1980s/Revenge of the Nerds flavor, and Jason Bateman and Olivia Munn get stoned on the roof together. Kate Mckinnon is a comic genius who wears holiday sweaters better than anyone.

A Christmas Story, the 1983 Christmas comedy film everyone loves so much was directed by Bob Clark, and based on Jean Shepherd’s anecdotes. The movie is presented in a series of vignettes, with narration provided by the adult Ralphie reminiscing on one particular Christmas when he was nine years old and desperately wanted only one thing: a Red Ryder Carbine Action 200-shot Range Model air rifle. Ralphie’s dreams are rejected by his mother, his teacher and even a terrifying department store Santa Claus, all giving him the same warning: “You’ll shoot your eye out.” We’ve all watched it thousands of times and it never gets old. It plays continuously on cable all season long.

Eight Crazy Nights is a 2002 adult animated holiday musical comedy-drama film directed by Seth Kearsley and produced, co-written by and starring comedian Adam Sandler, in his first voice-acting role. Unlike most holiday films, it centers on Jewish characters during the Hanukkah season, instead of the religious or secular celebration of Christmas. The film’s title is taken from a line in Sandler’s song, The Chanukah Song, considered by many people to be the world’s greatest modern holiday song. Another line in that song is: Smoke Your Marijuana-kah, If You Really, Really Wanna-kah.” Great song, great movie and we all know Adam Sandler gets high. “You can put your weed in there.” Remember?

Elf is a 2003 Christmas fantasy comedy film directed by Jon Favreau, who also directed Marvel’s Iron Man and played “Gutter” in PCU. It stars Will Ferrell, James Caan and Zooey Deschanel. Buddy the Elf was accidentally transported to the North Pole as a young child and raised to adulthood among Santa Claus’s elves. Unable to get past the feeling that he doesn’t really belong, the adult Buddy travels to Manhattan  in search of his real father. Peter Dinklage of “Game of Thrones” fame plays an angry children’s author and Peter Billingsley (the kid who played Ralphie in A Christmas Story) has a small part as a fellow elf. Will Ferrell is at his best here and sells that sense of childlike wonder like nobody else.