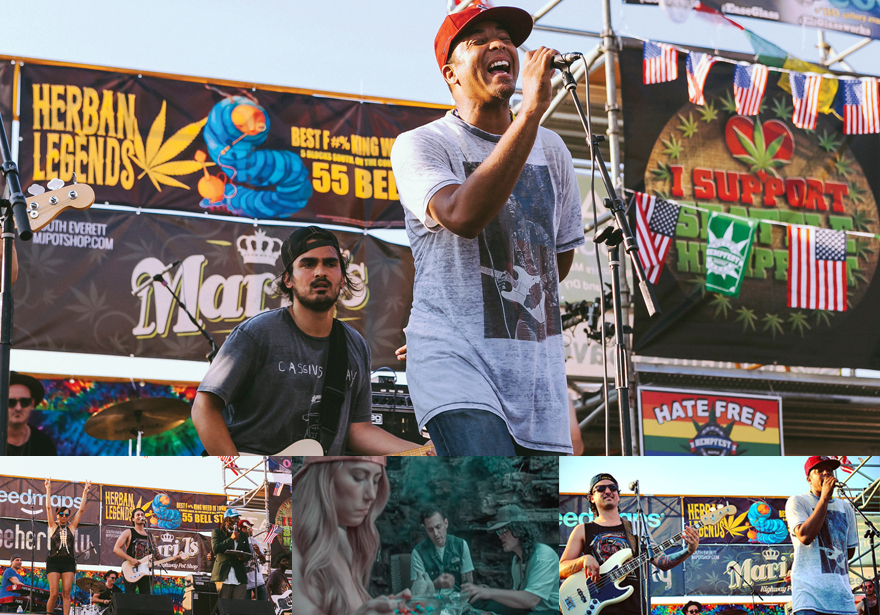 Adam Vadel and Keaton Simons both already had impressive musical resumes back when they first met, having worked alongside powerhouse performers like Pharcyde, Gnarls Barkley, Carlos Santana, Joe Cocker, Iggy Pop, Snoop Dogg, and Chris Cornell, just to name a few. So it seemed to them like a good idea to get together and form a new style of musical collaboration, and when that happened – BACKBONE was born!

What is BACKBONE exactly? The answer is many things, but primarily BACKBONE is a band that closely resembles something more along the lines of funkadelic performance art with a rotating cast of collaborators from every musical genre creating an experience of groovy and moving sounds. Aiding Keaton and Adam in this process is their good friend, iconic American bass player, and fellow artist, Lonnie Marshall. Lonnie is perhaps best known as the frontman for Weapon of Choice, but has also played with The Red Hot Chili Peppers, Fishbone, Tone Loc, Les Claypool, George Clinton, Joe Strummer, and Ice Cube. Marshall also teaches guitar workshops at The Silverlake Conservatory of Music, and has been doing so since it was originally founded by Flea in 2001.

Keaton Simons isn’t a stranger to the world of entertainment. His mother Eliza played the role of Brunella in Animal House, directed by John Landis in 1978. She was pregnant with Keaton at the time, so technically he was the youngest cast member of the legendary comedy. Eliza’s husband and Keaton’s stepfather is Oscar nominated actor Eric Roberts, and his step-sister Emma and aunt Julia are established in the industry as well. When Adam Vadel and Simons met, they became as close as brothers in no time at all, and began to form a new musical family of their own. In addition to music, the two men shared another passion that would only serve to bring them both closer together; Cannabis!

Adam and Keaton had both been smoking cannabis recreationally and using it medicinally for years before they met. After getting to know one another, they discovered that they shared not only a love of cannabis, but also a love of using the plant to aid in the creative process, and to help them each reach new levels creatively by freeing their minds with the use of marijuana. Simons said:

“When people ask me if I’m high right now, the answer is always yes and no. Have I been smoking, and is my mind free, and am I creating? Yes! Am I all fucked up and too stoned to function? No. Infusing with cannabis medicinally unlocks new levels in the mind’s creativity.”

Adam added, “When you begin creating, and then continue to smoke and use cannabis each time you reach a new level or phase, you just keep positively progressing. It’s the same with making music, playing video games, making art, or surfing. Score a goal, smoke a bowl, and ride the wave. It’s beautiful.”

BACKBONE is making more than just music. Their creative endeavors also extend to on-the-air roundtable discussions, philosophical debates, and cannabis fueled conversations with their weekly late night web-series ‘BACKBONE Ganja Zone” on Z420 TV. On Ganja Zone they talk about anything and everything related to marijuana and music, while also receiving visits from friends in both industries. You can catch the show live on Wednesday nights at 9PM PST on z420.tv. Recently they performed at The Infused Expo and even made an appearance at The Edibles List Magazine Booth at The Los Angeles Comic-Con.

You can also see BACKBONE play live at Hotel Cafe on November 25th. Hardcore fans are called BackBoners. (They wanted that in print.)