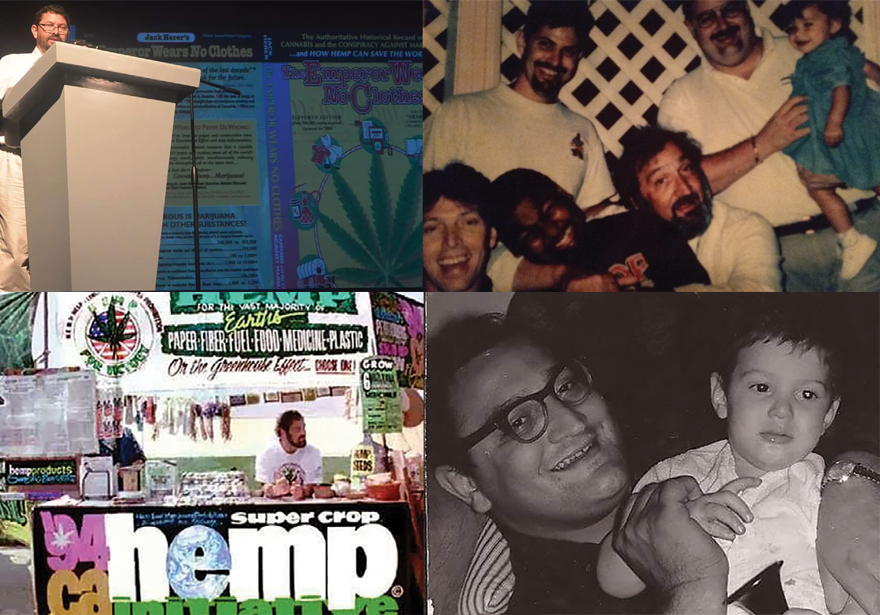 In light of Jack’s birthday, we wanted to celebrate his legacy by highlighting his many achievements in our industry. It truly saddens us to hear so many twenty-something’s have no idea who Jack Herer is, outside of the cannabis strain. I had the opportunity to sit down with his 2nd oldest son, Dan and was able to gain a unique insight about this iconic man.

I must admit that the very first time I met with Dan he had to correct my pronunciation of his last name – whoops! Like many, I pronounced Herer as her-air, fun fact; it is actually pronounced like hair-er. Dan laughed a bit and said, “think Herer like terror.”

I was dying to find out what Jack was like as a father. Dan explained that pre-pot, “He was stern; if he asked you to do something, you just did it. It was probably due to being an Army vet ,and the mentality of ‘do as I say, not as I do’. However, after trying cannabis in 1969, my father became a noticeably different guy.”

At the time he was working and maintaining neon signs in Los Angeles. After discovering marijuana in his 30’s, he became much more “hippie-like and free thinking,” explained his son.

I was curious what it was like to be amidst Jack’s world while growing up. He explained that hanging out with hippies, stoners, and swingers in the early 70’s was interesting. He tells me with a grin, that one of his fondest childhood memories with his father was going to Studio 54 in New York when he was about fourteen – Hey, it was the 70’s right?

Jack needed all hands on deck after publishing his first book, G.R.A.S.S. “It seemed like overnight we were not just his kids but his working staff for the 1st publication, GRASS. I remember the publication stamp was incorrect, so we had to blackout and re-stamp each copy by hand,” Dan recalls.

Dan continued to work with his father throughout the 80’s and 90’s. He was among the many people gathering signatures, at the California Federal Building, for 108 days before Jack was arrested for breaking an outdated law. The Hemp Booth in Venice Beach was in full swing at this time. Dan helped to maintain and run the booth while his father was on the ‘campaign’ road.

He shared an apartment with his father in Van Nuys. I wondered how it was to live with someone who always had a following. “Ah my father’s ‘camp’ – My father had an extraordinary ability to meet and inspire people to dedicate themselves to the movement and in a sense, to him. To give their time freely, and in exchange he gave them love, food, shelter and in a sense, self worth,” he explained.

They rented a small apartment in Venice right near where the booth was. This apartment essentially housed the booth on off days and all of the people who worked it.

In the mid 90’s, Dan stepped away from the cause to pursue personal goals; Jack wasn’t thrilled with that idea. “The relationship was always strained, in the sense that I had my views in what I wanted to do [with my life] and he had his views on what I should be doing within the movement,” he explained. Simply put, if you didn’t agree with Jack, you were wrong.
Dan gave me a brief rundown of some key players he remembers:

• ‘Captain’ Ed Adair – “He was my dad’s right-
hand man. He was devastated when his partner in the movement succumbed to cancer in 1991.”
• Richie Marcella – “In the early 80’s, Richie was the guy my dad could depend on for anything.”
• Michael M. – “He was one of my father’s
closest confidants. He was the resident artist and even painted all of the Hemp Booth signs.”
• Eddy Lepp – “He was very close to my father
in his latter years. He never left his side; he truly cared for my father.”
• Dave Martin – “Owner of HempStar, a hemp product company that now sells Jack’s Hemp for Victory shirt.”
• Dave the Hemp Man – “A longtime friend and
hemp supplier”
• Chuck Jacobs – “A devoted friend.”

Prop 215 was actually not Jack’s initiative; it was head by Dennis Peron. “The wars between him and Dennis were monumental. My dad had issues with Prop 215, but eventually he came on board. He felt it didn’t go far enough. If people had access to this plant medically, and could go to a doctor to be prescribed this as a medicine, he felt that a majority of the folks would stop fighting as they got what wanted – safe access.” It turns out he was right, because up until recently the war had ended and people had given up.

Since his father’s death, Dan has decided to come back to the movement and continue his father’s legacy – his way. He has started The Jack Herer Foundation, dedicated to the re-education of this plant and its place in history as the planet’s number one renewable source. If you would like more information on The Jack Herer Foundation please go to:
www.jackhererfoundation.org