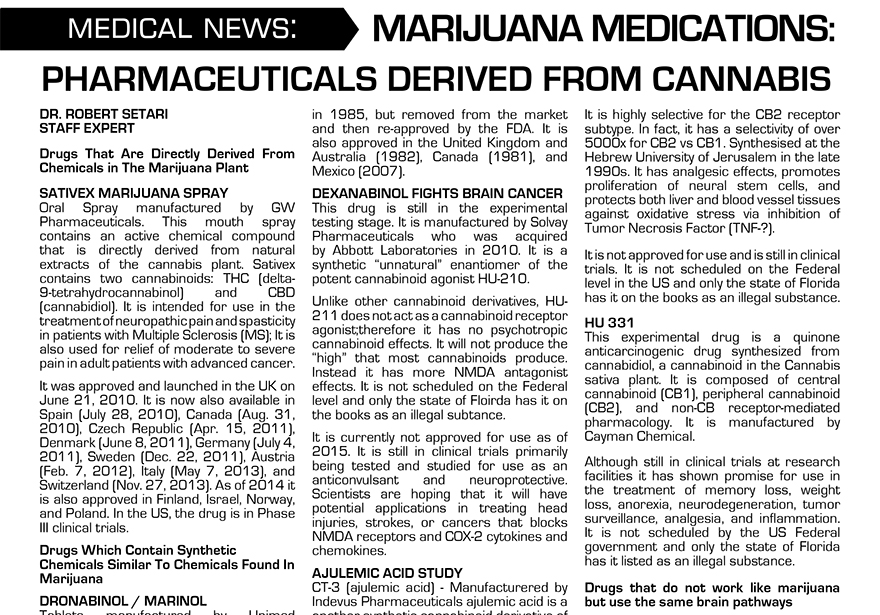 Drugs That Are Directly Derived From Chemicals in The Marijuana Plant

Sativex Marijuana Spray
Oral Spray manufactured by GW Pharmaceuticals. This mouth spray contains an active chemical compound that is directly derived from natural extracts of the cannabis plant. Sativex contains two cannabinoids: THC (delta-9-tetrahydrocannabinol) and CBD (cannabidiol). It is intended for use in the treatment of neuropathic pain and spasticity in patients with Multiple Sclerosis (MS); It is also used for relief of moderate to severe pain in adult patients with advanced cancer.

Dronabinol / Marinol
Tablets manufactured by Unimed Pharmaceuticals, a subsidiary of Solvay Pharmaceuticals. Marinol has an active ingredient that is a synthetic Delta-9 THC. It is primarily used for the treatment of nausea and vomiting for patients undergoing chemotherapy. It is also used for the anorexia (loss of appetite)appetite in cancer and AIDS patients who ohave cachexia (wasting disease). It is used as a stimulant to promote eating. It has also bee recommended as an analgesic to ease neuropathic pain in multiple sclerosis patients.

It was FDA approved in United States as Schedule I drug for appetite stimulation (1992) and for nausea (1985); moved to Schedule III effective July 2, 1999. It is approved in Denmark and Canada.

Cesamet | Nabilone
These capsules are manufactured by Valeant Pharmaceuticals International. They contain a synthetic cannabinoid analogous to THC. It is prescribed for the Treatment of nausea and vomiting in patients getting chemotherapy. It was originally approved by the FDA in the US in 1985, but removed from the market and then re-approved by the FDA. It is also approved in the United Kingdom and Australia (1982), Canada (1981), and Mexico (2007).

Dexanabinol Fights Brain cancer
This drug is still in the experimental testing stage. It is manufactured by Solvay Pharmaceuticals who was acquired by Abbott Laboratories in 2010. It is a synthetic “unnatural” enantiomer of the potent cannabinoid agonist HU-210.

Unlike other cannabinoid derivatives, HU-211 does not act as a cannabinoid receptor agonist;therefore it has no psychotropic cannabinoid effects. It will not produce the “high” that most cannabinoids produce. Instead it has more NMDA antagonist effects. It is not scheduled on the Federal level and only the state of Floirda has it on the books as an illegal subtance.

It is currently not approved for use as of 2015. It is still in clinical trials primarily being tested and studied for use as an anticonvulsant and neuroprotective. Scientists are hoping that it will have potential applications in treating head injuries, strokes, or cancers that blocks NMDA receptors and COX-2 cytokines and chemokines.

Ajulemic Acid Study
CT-3 (ajulemic acid) – Manufacturered by Indevus Pharmaceuticals ajulemic acid is a another synthetic cannabinoid derivative of the THC metabolite 11-nor-9-carboxy-THC without causing a subjective “high”; it has with no psychoactive effects at fairly large doses. It is being developed for the treatment of neuropathic pain and inflammatory conditions such as arthritis. However, it does not have the anti-emetic effects of other pharmaceuticals in this category so it is not useful for nausea and vomiting.

As of 2015 it is not approved for use in any country, but is in clinical trials for use as an analgesic and anti-inflammatory.

Cannabinor
This is a synthetic chemical that binds to the brain’s CB2 receptors. It is manufactured by Pharmos and is being studied as an analgesic for pain relief, especially for neuropathic pain. It is also being tested as a treatment for bladder control.

After their Phase II(a) trials Pharmos reported that cannabinor failed to meet the primary goal of reducing pain, but the drug was found to be well tolerated and safe. Further trials are underway.

HU 308
This innovative drug is licensed by Pharmos and it is another synthetic cannabinoid. It is highly selective for the CB2 receptor subtype. In fact, it has a selectivity of over 5000x for CB2 vs CB1. Synthesised at the Hebrew University of Jerusalem in the late 1990s. It has analgesic effects, promotes proliferation of neural stem cells, and protects both liver and blood vessel tissues against oxidative stress via inhibition of Tumor Necrosis Factor (TNF-?).

It is not approved for use and is still in clinical trials. It is not scheduled on the Federal level in the US and only the state of Florida has it on the books as an illegal substance.

HU 331
This experimental drug is a quinone anticarcinogenic drug synthesized from cannabidiol, a cannabinoid in the Cannabis sativa plant. It is composed of central cannabinoid (CB1), peripheral cannabinoid (CB2), and non-CB receptor-mediated pharmacology. It is manufactured by Cayman Chemical.

Although still in clinical trials at research facilities it has shown promise for use in the treatment of memory loss, weight loss, anorexia, neurodegeneration, tumor surveillance, analgesia, and inflammation. It is not scheduled by the US Federal government and only the state of Florida has it listed as an illegal substance.

Rimonabant / Acomplia | Marijuana
Related Weight Loss Drug
Prescription tablets manufacturered by Sanofi-Aventis. Acomplia(Rimonabant) is a synthetic chemical that blocks the natural receptors of endocannabinoids in the brain. This results is suppressing appetite; the opposite of Marijuana which increaes appetite. It is used as an anti-obesity drug.

Although it was first tauted as a miracle obesity drug and approved in Europe, it was subsequently withdrawn from the European market because of concerns of mental status side effects. It was never approved in the US.

Taranabant
This synthetic chemical is another cannabinoid receptor antagonist; it blocks CB1R receptors in the brain and suppresses appetite. It is manufactured
by Merck.

It was still in clinical trials in2013 pending approval as an anti-obesity drug. However, Merck announced that it decided to stop development because of the side effects which included depression and anxiety.