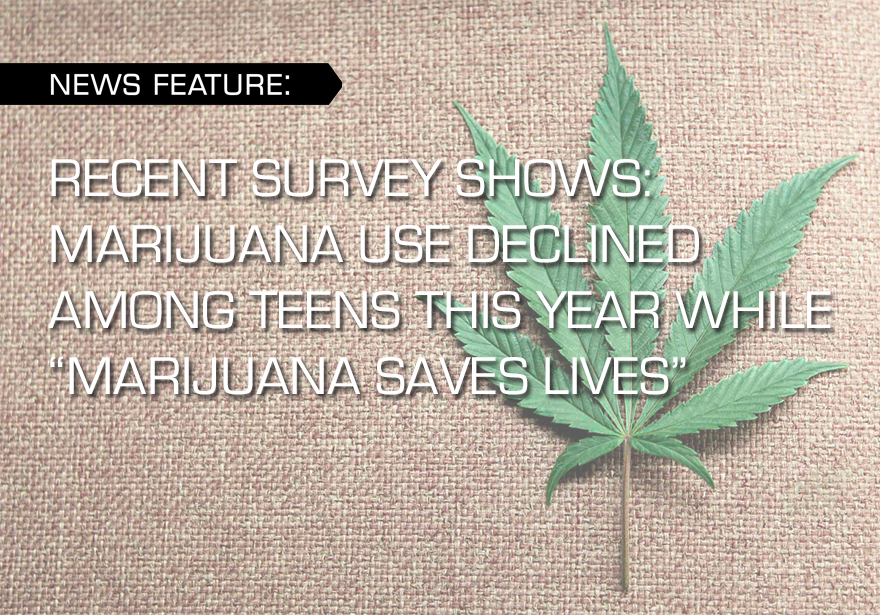 The University of Michigan’s newly released “Monitoring the Future” study, which surveys 40,000 to 50,000 students in 12th, 10th and 8th grades about their use of alcohol, legal and illegal drugs, and cigarettes, showed a slight decline from 26% to 24%, in 2014. Among high school seniors 5.8% (1 in 17),said they used marijuana almost daily, down from 6.5% in 2013. The study findings are particularly noteworthy, due to the fact, that Colorado and Washington state implemented full-scale retail marijuana markets this year, and Oregon, Alaska and Washington, D.C., voters have voted to do the same!

Even synthetic chemical concoctions like K2 and Spice have fallen out of favor as 11% of 12th graders in 2011 listed themselves as users, and only 6% in 2014. Nora Volkow, Director of the National Institute on Drug Abuse, said abuse of prescription drugs also declined 2% this past year and narcotic drugs dropped to 6% for 2014. He said teens consider narcotic pain relievers like Oxycontin and Vicodin safer than illicit drugs like heroin and cocaine because doctors prescribe them. Volkow said, “A very strong and aggressive campaign about educating the public on the risk of opioid medications as it relates to overdoses and deaths has made teenagers aware that they are not so safe as they thought they were.”

In a press release the study’s author stated that, “Both alcohol and cigarette use in 2014 were at their lowest points since the study began in 1975.” Another recent survey of over 11,000 high school seniors done by the Journal of Psychoactive Drugs found that 33% of high school seniors in the United States support legalized marijuana and 25.6% believe marijuana should be considered a crime. This survey was taken from 2006-2011, and at that time 1/3 of seniors supported legalizing marijuana. That figure has grown in the past two years, but the legalization debate goes on. However, most new studies and surveys as well as research show the positive effects of legalizing marijuana and making it easily accessible.

A new study by the Rand Corporation and the University of California – Irvine reported this week by MSNBC states that, “Marijuana Dispensaries Save Lives”. This study examined whether, in the years following legalization, states that legalized marijuana had experienced reductions in fatal overdoses and addiction treatment center admissions relating to opioid abuse. The researchers found that these states experienced significant reductions in both measures of opioid misuse — but only if they had also legalized marijuana dispensaries.

According to the Center for Disease Control, more than 16,000 people fatally overdosed on prescription painkillers in 2013, accounting for 60% of all overdose deaths. This study suggests that easily accessible marijuana may curb this fatal epidemic. The research according to the MSNBC report found that in the six states where doctors are allowed to prescribe marijuana, but where retail dispensaries are prohibited, the study found “no evidence” of “reductions in substance abuse or mortality.” But in those 18 states where medical marijuana shops are allowed, they found a 16% reduction in “opioid-related mortality” and 28% reduction in opioid-abuse treatment admissions. The Rand/UCI study found that there was no decline in the distribution of legal opioid painkillers in states with dispensaries.

Thus, the researchers suggest that the reduction in painkiller abuse in these states comes less from patients switching their prescriptions, than from people who were taking illegally obtained opiates replacing the drugs with legal marijuana. Therefore, the findings suggest that dispensaries may have saved the lives of some recreational pill-poppers, who quit hard drugs once they got a pot prescription.

When coupled together these two studies present a positive picture for more legalization, and more dispensaries. They also showed that accessible marijuana isn’t the negative people once thought, and control thru legal dispensaries can save lives. Conclusion, it’s time to “end the war on drugs.”