Scout Durwood is probably best known to mainstream audiences for playing Jordan on MTV’s cannabis themed comedy program, MARY + JANE produced by Snoop Dogg. Jordan is a perpetually stoned, free spirited, polyamorous, twenty-something, self-proclaimed “ganjapreneur” co-operating a mostly legal medical marijuana delivery business in a somewhat fictionalized version of modern day Los Angeles. Certain elements of Mary + Jane will leave real live cannabiz people asking a lot of questions, and they’ll wonder what the girls do concerning: sourcing, buying, banking, transportation, safety, storage, and the LA City Attorney – but that’s true of most any TV show based on an actual specific career, and cops, firemen, politicians, etc have similar thoughts. Jordan is highly likeable and especially endearing to users of cannabis. The role lends itself very well to Durwood’s slightly raspy voice, acting talents, energy, and natural comic abilities and physicality, but actually only begins to showcase the skills of a fascinatingly funny and friendly young performer who’s sure to do great things in the world of entertainment. She was kind enough to spend a day with us at the wonderful Beverly Alternative Relief Center (BARC) Collective in Beverly Hills shooting photos for our Holiday Ganja Gift Guide (featured in this very issue). Join Edibles Magazine for a few moments, and begin to get to know about the lovely and truly talented Scout Durwood.

Scout Durwood is named after Scout Jean Louise Finch, the narrator and central character of Harper Lee’s pulitzer prize winning novel, To Kill a Mockingbird, and has even dressed up as the character on Halloween. Although she enjoys cannabis quite a lot, and is enjoying it more and more since being cast on Mary + Jane, her real life tolerance is much lower than that of her character Jordan, who is super high almost all of the time. She also happens to be a Story Pirates teacher and Moth Storytelling Slam Champion. The Moth Story Slam is a live, open-mic, storytelling competition performed in the style of slam poetry, and being champion is no easy task. The Huffington Post named her one of the top “20 Burlesque Stars to Know” and she is a former staple of the New York City Cabaret Scene. Sometimes she is known as Lady Scoutington, and was featured on the Oxygen Network’s show, FUNNY GIRLS before being cast on Mary + Jane.

Scout is also an accomplished musician, singer, and songwriter. She plays the ukulele with great skill and has a lovely singing voice. Her first album, Whimsy, was released in the Spring of 2015, and her second album, Take One Thing Off, is coming out soon. In addition to Mary + Jane, Scout has also been featured on well known shows like House of Lies, Justified, and The Mindy Project, where she played gynecologist Doctor Zandra Fiore in the episode Girl Crush along with Anna Gunn. She’s also acted in good, but not-so-well-known shows like Snuggle Pup, Tackle Girl, Parkour Anarchy, and Burt Paxton: Private Detective. I’m actually a fan of Burt Paxton and had already seen Scout’s Episode a couple of years ago. In 2007, she was the very first contestant eliminated on MTV’s A Shot at Love with Tila Tequila, the bisexual dating competition that pitted boys against girls as they tried to win the heart of Ms Tequila. Tila recently had her twitter account suspended after proclaiming herself the “Alt-Reich Queen” (so weird how the world changes). “She’s a nazi now. She was not a nazi then.” It’s a real pleasure to see Scout return to the MTV screen under such better circumstances and conditions.

I personally had the honor of tech-directing UNDER THE WATER, a one person musical play written and performed by Scout Durwood. It’s where I first met Ms Durwood, and is a brilliant piece of theatre about love, mermaids, and murder, and has been performed at The Improv Olympic West, The Upright Citizens Brigade, and as part of The Hollywood Fringe Festival. Along with acting, music, playwriting, and storytelling, she’s a gifted stand up comedian and improviser, well known and much beloved throughout the Hollywood comedy scene. When she isn’t too busy being on television, she is often performing live at clubs and theaters throughout Los Angeles. Seeing her perform live at any opportunity is highly recommended.
Although a lover of fine edibles, she needs to be very selective when choosing infused foods, due to suffering from a serious gluten intolerance. Her favorite edibles are BREEZE brand mints, which are conveniently 100% gluten-free. Thanks to her role on Mary + Jane, she has technically handled more fake cannabis, than actual marijuana. The joints on the show are Honeyrose Herbal cigarettes, which she doesn’t too much mind the taste of. The bricks of weed are really oregano, which was initially a problem for the sound engineer on set, who happens to have a food allergy. They gave him a Claritin and thankfully it was no longer an issue. Interesting to note that oregano can be more dangerous than cannabis. 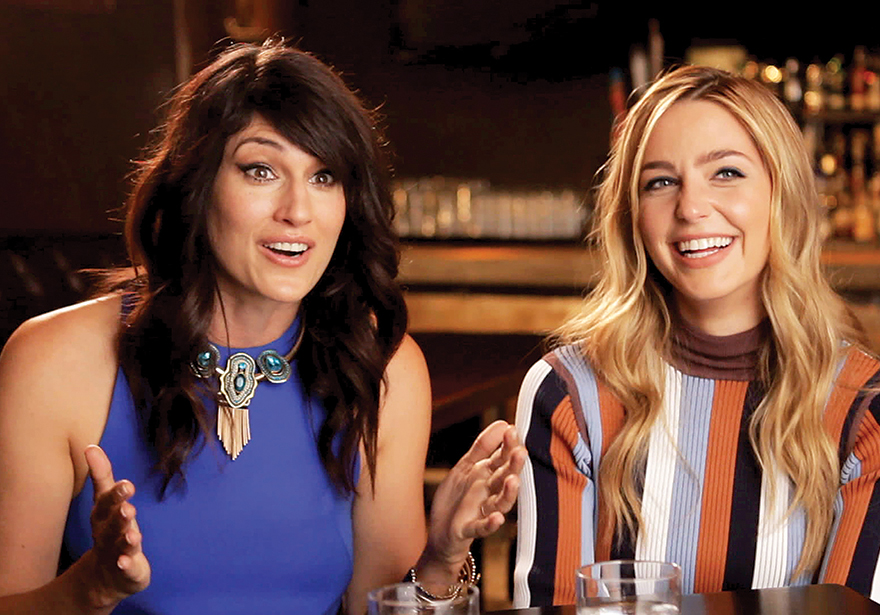 Collaborating with Emmy nominated writer Heather Anne Campbell, she is the creator of LOVE IN THE LAST 5 DAYS, a short romantic comedy horror thriller “Set at the intersection of love, death, and laughter”. It’s the story of Kat and Ellie, who “rekindle the spark in their failing relationship when Ellie is afflicted with a zombie-like infection that will ultimately lead to her death”. They’re currently raising funds on Seed and Spark. Sounds like a very original, and entertaining piece of work. We are sure hoping to see the finished product sometime in the near future.

Even though she was cool enough to spend the day with Edibles Magazine shooting these great pictures for our Holiday Ganja Gift Guide in Beverly Hills, she’s honestly not that enthusiastic about the Christmas Season, and is a little bit of a Grinch. That’s why we’re extra appreciative that she was so gracious and spent the day wearing the LET’S GET BAKED ugly christmas sweater and Santa accessories, and assisting us in putting together the gift guide. She even helped us out decorating the BARC Collective. Guess she’s not much of a Grinch after all.
There’s much more to say about her, so we hope to be talking to her again real soon. It was a pleasure to have her as a special guest speaker on the diversity panel at this year’s Infused Expo in downtown Los Angeles, and we’re very much looking forward to her being a presenter at The Best of Edibles List Awards ceremony coming in 2017. A second season of Mary + Jane is coming to MTV next year, and in the meantime the entire first season is available for streaming and binging on Hulu. Seek out more Scout, you’ll definitely be glad you did. To get to know Scout Durwood even better, hear her music, see more photos, and learn about upcoming performances and other projects, check out her website at http://www.scoutdurwood.com/.
Follow her on Twitter and Instagram at: @ScoutDurwood. She might even follow you back.
Also follow: @MaryJaneMTV.

If you’d like your very own LET’s GET BAKED Cannabis-Themed Ugly Christmas Sweater, as featured on MTV’s Mary + Jane and seen both here and in The Holiday Ganja Gift Guide on Scout Durwood, go to UglyChristmasSweater.com. They’re totally awesome and the internet’s number one resource for ugly christmas sweaters.