The world’s first hip hop dispensary opened in Portland, Oregon on June 16th. Green Hop Dispensary will be hosting regular hip hop shows, educational seminars, art exhibits, and an apprenticeship program to give young people skills to work in the cannabis industry. Cannabis laws have been used throughout America’s history to harass and imprison people of color, and with changing cannabis laws and awareness around social issues, dispensaries like Green Hop in Portland are changing the conversation and the game.

Hip hop, since its inception, has extolled the virtues of cannabis use. Rappers have traditionally not shied away from speaking about their experiences using cannabis recreationally and medicinally, and hip hop has been credited for helping to usher in a greater nationwide acceptance for the plant we all know and love. Co-owner of Portland’s first hip hop dispensary Green Hop is Karanja Crews, who credits hip hop as a personal refuge from his surroundings growing up in Northeast Portland.

Karanja is the founder of Teaching With Purpose, an organization that aims to change the way teachers and students interact. So often history lessons get whitewashed, and even in a state like Oregon with policies encouraging a more Native American and African American focus on history, Crews has found that leadership in schools sometimes aren’t even aware that there are new, more inclusive teaching policies and ideas being shepherded into schools. 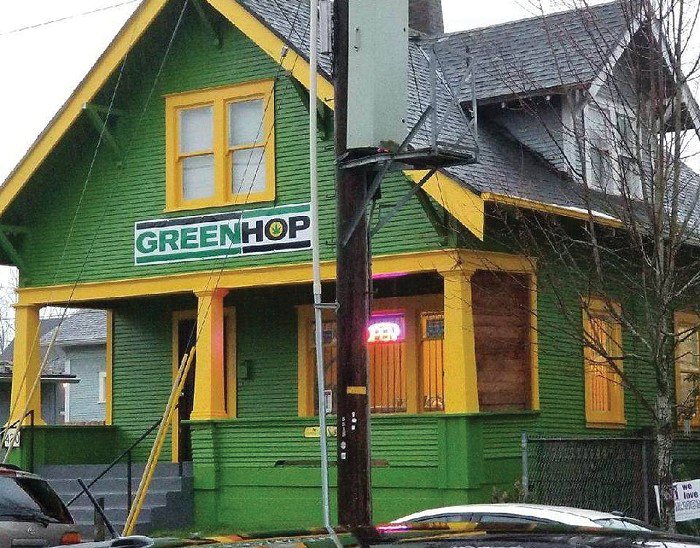 Green Hop dispensary is co-owned by Karanja Crews and Nicole Kennedy, who, in addition to co-owning Green Hop, is a nurse and a teacher. Portland’s first hip hop dispensary is more than a cool place to buy nug that plays good music. Crews and Kennedy are giving back to the community in tangible ways. They started the Green Hop Academy where participants can get real life experience working with cannabis at dispensaries, in cultivation centers, and in labs. The other benefit of this academy is the access to networking opportunities to connect with people in the cannabis industry. City of Portland Commissioner Amanda Fritz said “I admire Green Hop’s commitment to supporting African American youth in developing the skills and expertise needed to thrive in the cannabis industry, and share their goal of increasing the participation and success of people of color in an otherwise white-dominated field,”

Cannabis is more accepted now than ever and laws are supporting growth in the development of research about its medicinal properties, its recreational value, and also how its acceptance can help economies. Right now, only about 1% of dispensaries are owned by black people. For a drug that is responsible for putting so many black and brown bodies in prisons, there is great opportunity to use its burgeoning acceptance to reshape economic and social policies, and even to change policy to support and rectify unjust legal decisions from years past. The city of Portland recently passed a cannabis tax with some of its proceeds going towards funding programs that support minority owned cannabis businesses, and also record expungement.

“This is an opportunity for the City of Portland to encourage people of color in their pursuit to emerge within the cannabis industry. The link between Hip Hop culture and the normalization of cannabis is a natural partnership,” said Portland City Mayor Ted Wheeler. “Green Hop Dispensary’s mission to promote community health and wellness, and increase economic opportunities for people of color is something the City of Portland wholeheartedly supports.”