The Bahamas may be the next country to legalize cannabis and take advantage of its boundless potential, with CBD, tourism, banking and more. The Bahamas is the 3rd richest country in the world, after America and Canada, and has the 3rd highest per capita GDP in the western hemisphere.

Elliott Marshall, Founder of ProperRx is a Bahamian native, who has a chair on The Bahamas National Committee on Marijuana. Marshall says, “We are expecting upon completion of our report, an end to the prohibition of cannabis in the Bahamas and the beginning of industry. Led by Bahamians.”

Marshall was the first black man to be issued a cannabis delivery license in Oakland, back in the Prop 215 days. In 2018, he had to prove to the city of Oakland that he qualified as a social equity partner in order to get recreationally licensed. The process was so burdensome Marshall moved his efforts to building a licensed retail storefront in Arcata, in Humboldt county. California’s current taxation structure drove away his former delivery clientele in Oakland. 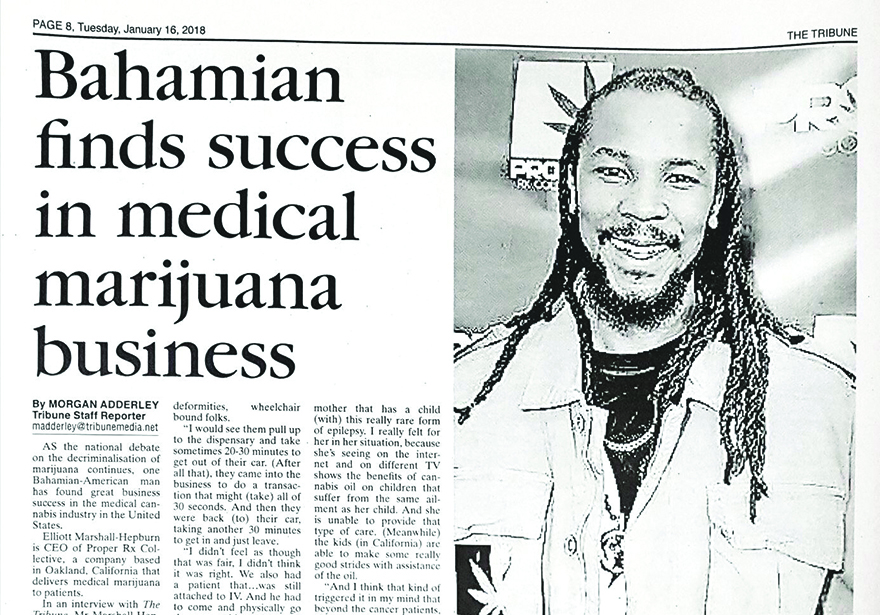 Now, Marshall is focused on the legalization of cannabis in the Bahamas and is already importing CBD products to the islands. He believes education to the regulators is key to setting up a proper system that works, and avoiding the pitfalls of over regulation.

“Implementation is expected to take place in the summer. We are about 45 days away from the Cabinet vote. It will be legalized, the cabinet will be voting on the recommendations of the committee as to the framework [details],” Marshall said.
Being a nation of islands, there are key differences between the Bahamian cannabis culture and the American cannabis culture.

“Well, we aren’t the U.S. so a lot of the restrictions and obstacles don’t exist or are a lot more attainable. Also, the ability to export globally will come into play almost immediately. We still can’t export legally [here] in the U.S., even to neighboring states. Reciprocity for all of the tourists that visit our shores annually without access to products where they’re from [is another main difference between the Bahamas and U.S. cannabis system],” Marshall commented.

For about the last year, hemp CBD has caught on heavily, as there are no hemp restrictions. Hemp products intended for health and beauty are being imported right now.

Learning to cultivate in the tropical climate is the only thing that makes producing locally sourced CBD unique in the islands, which Marshall believes is not a major obstacle.

The agencies that will be regulating CBD and THC are yet to be formed. Currently, it all falls under the regulation of The Ministry of Health.

“[It will be] similar to the ones offered in Oakland but with a simple caveat of ownership for a Bahamian being secure. Like most Caribbean islands, the local Bahamian doesn’t own any major industries within their country. So we proposed that as a foundation of our cannabis industry. The locals should be at the table and able to secure those international partnerships and ensure some of the currency generated remains in the country,” Marshall said.

When asked about the “War on Drugs”, Elliott replied, “The War on Drugs started in our area. Our location has made us a destination for all product illicit or not, headed into the United States, so yes, the War on Drugs still exists throughout our waters, regardless of the obvious flaws of that approach.”

Legal cannabis tourism in The Bahamas sounds amazing to us. #Goals. Marshall sees the obvious benefits to their tourism industry, which drives the Bahamian economy. He says, “It will definitely give us a boom. Currently it’s a taboo product that is in heavy demand. Now we are hoping to turn that into one of the stronger facets of our economy.”

It is yet to be determined if indoor and outdoor cultivation will be allowed or restricted, but the framework is in place for both cannabis and hemp cultivation. Additionally, manufacturing will be allowed with a seed to sale to shipping tracking system.

Once the pending cabinet vote takes place, there will indeed be a resident component required for licensure. The tax rate is yet to be determined.

Marshall says the plan is to import and export, with a main focus as an equatorial country on exportation.

“We have some of the largest and most capable private container ports in the world, and even before cannabis, we were already a major shipping hub for the region,”
Marshall said.

Cannabis legalization creates obvious new opportunity in the local job market. “It should definitely increase wages for all employed with the industry directly and offer exceptional growth opportunities, (as well as new jobs). But the ancillary businesses that are going to be needed will expand opportunities even more so,” Marshall foresees.

A solid cryptocurrency has yet to emerge with the ability to turn coin back into cash for cannabis transactions. With a strong dollar, the Bahamas presents a new frontier of banking opportunity for the industry. Marshall says, “We have no federal government and no issues within the country regarding banking. If it is passed it is law and case closed. The majority of the banks in the Bahamas are either Bahamian or Canadian.”

The Bahamas have recently been brought into the fraudster spotlight with the infamous Fyre Festival going afoul. This warrants the big question: How will The Bahamas be protected from big corporations looking for quick profits?

“That’s always a concern in our region but with the approach that my two companies have taken within the community we feel as though we are poised to not only have a seat but also a voice. This should allow our government to look internally first for this opportunity rather than to foreigners,” Marshall said.