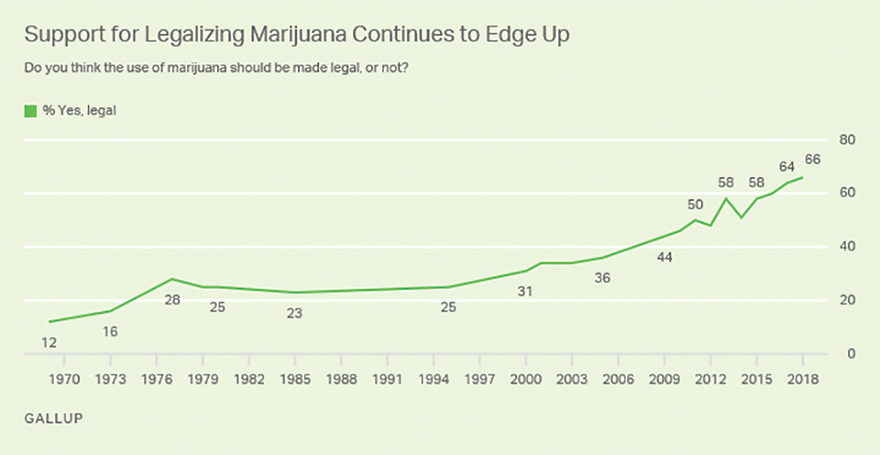 According to a new Gallup Poll, 66% of Americans now support legalizing cannabis, a new high in Gallup’s trend tracking cannabis support over nearly half a century. The latest figure marks the third consecutive year that support on the measure has increased and established a new record.

Legalizing the use of cannabis was an unpopular idea when Gallup first polled Americans in 1969, just 12% at that time said it should be made legal. Support grew in the 1970’s but stagnated in the 20% range until the new millennium, when momentum for legalization picked up again. Since 2000, support for legalizing cannabis has trended steeply upward, reaching majority support for the first time in 2013, one year after Colorado and Washington voters legalized recreational use of cannabis.

The October 1st-10th Gallup poll was conducted right before Canada enacted their legalization, becoming the second country in the world to legalize the recreational use of cannabis.

Support for legalization in the U.S. has continued to grow, even as Attorney General Jeff Sessions has pledged to crack down on cannabis at the federal level. But Sessions’ own department has done little to actually carry out his demonstrated opposition to legal marijuana, and states have continued to legalize it since Sessions took on his role. Moreover, President Donald Trump undermined his attorney general’s pledged mission over the summer when he indicated he would likely support a bill to allow states to determine their own cannabis policies. 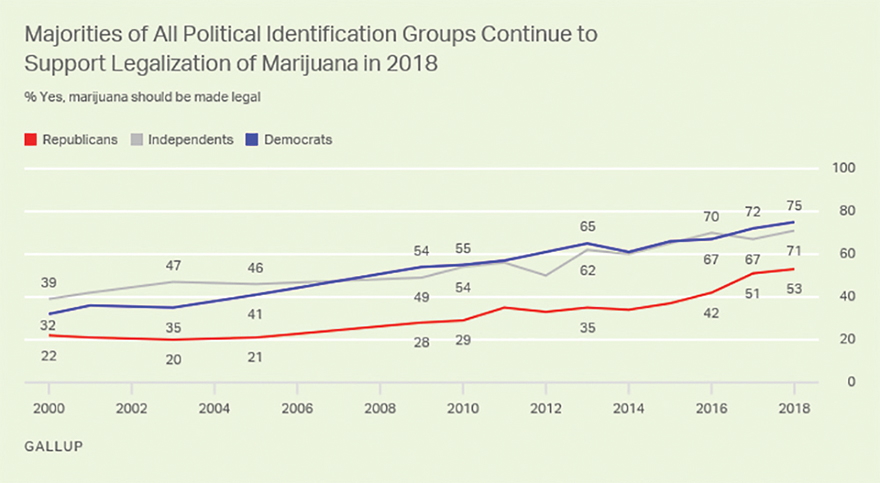 Jeff Sessions’ opposition to legalization is further undercut by shifts in attitudes among his own political party. Gallup found last year that a slim majority of Republicans supported legal marijuana for the first time, and this year’s figure, 53%, suggests continued Republican support.

Among Americans aged 55 and older, views that cannabis should be legalized now surpass the majority level, with 59% support, up 50% from
last year. 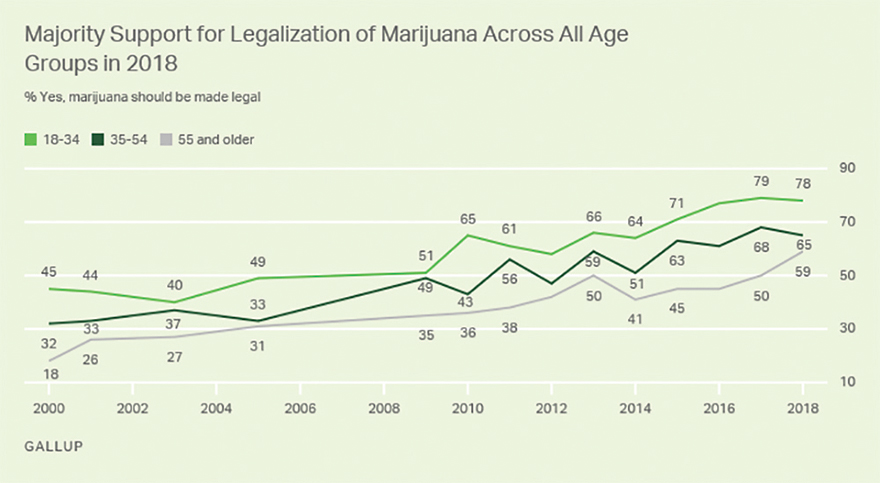 Meanwhile, solid majorities of younger adults have supported legalization for several years. Support is strongest among adults aged 18 to 34, at 78%, while nearly two in three adults aged 35 to 54 (65%) approve of legalizing cannabis.

In 2009 and 2010, prior to any state legalizing cannabis, support for legalization reached the majority level in only one U.S. region, the West, at 56%. The most dramatic change in attitudes about legalization are recent. As of 2017 and 2018, all regions now favor cannabis legalization with the West, South, and MidWest tied at 65% approval, and the East now leading approval at 67%.