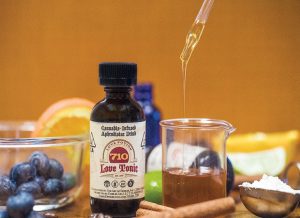 “I didn’t know if it was day or night, I started kissing everything in sight, But when I kissed a cop down on Thirty-Fourth and Vine, He broke my little bottle of Love Potion Number Nine…”

A History of Aphrodisiacs, Edibles and Cannabis:

Since the beginning of humankind, it seems like we’ve been doing what we can to make sex even better — more enjoyable, plentiful, and meaningful, often times by eating or drinking something specific. Mandrake root was used to improve sexual function by ancient Egyptians as well as by Old Testament Biblical heroines. In Genesis, Rachel asks for Leah’s Mandrake root, hoping it will result in a lovemaking session that produces a son believing that was what helped Lean to have her child Reuben. Some ancient intimacy aids sound like they’d make great edibles. Cleopatra rubbed honey and almond butter on her most private parts and they say it drove Mark Antony insane with lustful desire. That sounds like it would make a good edible right there. The Kama Sutra, an ancient Indian Sanskrit text on sexuality, eroticism and emotional fulfillment in life, also promotes honey as a sexual booster and newlywed couples used to drink mead, wine made from honey, each night before bed for their first month of marriage, and that’s why we still call it “The Honeymoon Phase” today. The ancient Aztec ruler Montezuma is rumored to have drank over fifty mugs of a warm, chocolate cacao brew before visiting his harem. Cacao is a natural aphrodisiac. Chocolate’s ability to act as an aphrodisiac is famous, but it’s actually the chemicals in the raw bean that stimulate the senses and heighten feelings of joy and pleasure. The compounds of anandamide and phenylethylamine, “the love chemical,” make the human brain releases dopamine during sexual activity. It’s understandable why it’s considered a Mayan superfood and many of these old world practices either never went out of style, or have recently been repopularized in our modern world. In Ancient Chinese medicine cannabis was used for a variety of reasons including increasing sexual potency and pagan cultures used it as an aphrodisiac during ritualistic fertility festivals. 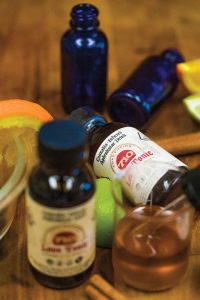 An aphrodisiac, typically meaning any kind of a love drug, is technically described as a substance that increases sex drive when consumed. Aphrodisiacs are actually distinct from substances that address fertility issues or secondary sexual dysfunction such as erectile dysfunction, although they are commonly used interchangeably while some happen to be both. Throughout human history, food, drinks, and behaviors have had a reputation for making sex more attainable and pleasurable. Sometimes a sexual stimulant can be applied topically instead of being ingested, which is exactly what women in Ancient Mesopotamia did with cannabis infused ointments they used to excite themselves as well as their partners.

The depiction of “love drugs” in the mainstream arts has always been common. Love Potion No. 9 is a song written in 1959 by Jerry Leiber and Mike Stoller, and one of the best examples of an aphrodisiac tale in popular culture. The song describes a man seeking help to find love, so he talks to a gypsy who determines, by means of palmistry, that he needs “love potion number 9”. The potion, an aphrodisiac, causes the narrator to fall in love with everything he sees, kissing whatever he sees in front of him. The song was originally performed by the Clovers, and then was recorded by The Searchers in 1964. Their version reached number three on the US Billboard Hot 100. Love Potion No. 9 is also a 1992 American romantic comedy film starring Sandra Bullock and Tate Donovan, based on the song. It’s not a great movie but it did give us Sandra Bullock, so thanks.. I guess. She was better in Demolition Man the following year. 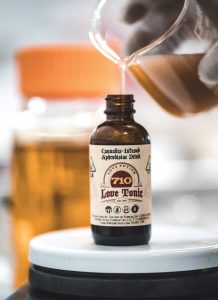 Mankind’s obsession with maintaining an erection goes all the way back to the beginning of recorded history.  In Ancient Greek mythology, Priapus was a minor rustic fertility god who was the protector of livestock, fruit plants, gardens and male genitalia. Priapus is marked by his oversized, permanent erection, which gave rise to the medical term priapism. Priapus was described as the son of Aphrodite by Dionysus. Dionysus is the god of the grape harvest, winemaking and wine, of fertility, ritual madness, and theatre in ancient Greek religion. Wine was considered a lovemaking aid because of the inhibition loosening qualities it boasts so that all makes sense. Priapism is a condition in which a penis remains erect for hours in the absence of stimulation or after stimulation has ended and is named after Priapus. Ancient Romans believed the spicy green Arugula to be a powerful aphrodisiac, using it in love potions and consecrating it to Priapus. Arugula is high in vitamins C and K, as well as magnesium, zinc and potassium, so the Ancient Romans were probably really onto something.

A very interesting Stanford University study published in the Journal of Sexual Medicine conducted a survey across demographics measuring sexual activity for cannabis smokers. The researchers found that “a positive association between marijuana use and sexual frequency is seen in men and women across all demographic groups.” Dr. Lester Grinspoon, a Harvard Medical School psychiatrist and an early advocate for cannabis, stated that for some people, “cannabis simply enhances their experience with sensuality and therefore, increases their libido.” In 1994, during an appearance on Ricki Lake’s daytime talk show, Skid Row frontman Sebastian Bach told the audience that one of the main side effects of smoking cannabis for him was that, “weed always made him a little horny.”

Other studies also point to the positive sexual benefits of cannabis consumption. Dr. Monica Grover of Asira Medical is double Board certified in Family Medicine and Gynecology, with practices in both Midtown, Manhattan and Westchester, New York and she is currently conducting her own independent research. According to Forbes, she reported that,  “Consumption of small quantities of marijuana prior to sex may increase libido in female patients, which in turn can release positive endorphins and increase vaginal lubrication.”

CBD naturally relieves stress and anxiety, and also activates the serotonin receptors in both the brain and the body, so it doesn’t only affect you physically by increasing libido but stimulates you mentally as well. CBD also flushes toxins from the body and inhibits them from reforming, activates the endocannabinoid system, helps regulate sex hormone synthesis, lowers prolactin levels for shorter refractory periods and quicker recovery times and helps regulate dopamine levels for longer stronger orgasms.

Love Potion 710 is an innovative new cannabis infused aphrodisiac tonic made up of a special proprietary blend of sixteen different plant based herbs, roots and berries that are all believed to increase libido in both men and women all over the world, combined with all natural cannabinoids. The tonic is continuing the ancient and ongoing traditions of using natural and herbal remedies and solutions to improve sexual health and well being. 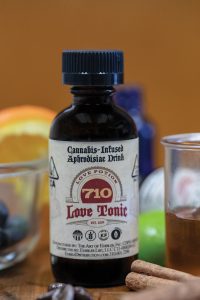 Love Potion 710 was developed in both the laboratory and the kitchen by working with a Doctor of Traditional Chinese medicine who specializes in sexual health and wellness, as well as Jamaican food scientists and Western cannabis infusion specialists to get the homogenization and emulsification of all the different special herbs just right. Lots and lots of research and development went into creating the specific blend of aphrodisiac herbs used to make the proprietary blend that gets made before the cannabis is added. It takes a very specific combination of measurements to make sure the synergistic properties of all the herbs work together correctly. The blend of ingredients includes Carthamus, Cinnamon Bark, Ginkgo Biloba, Blueberries, Pomegranate, Rehmannia Root, Tribulus Terrestris Extract, Wild Yam, Citric Acid, Acai, Maca Root, Green Coffee Bean, Tongkat Ali, Horny Goat Weed, Red Chinese Ginseng, Chaney Root and Cordyceps. Sweetened with honey and mixed with just the right amount of apple cider vinegar, Love Tonic tastes good and is good for you. Some people report that it almost has a taste like Kombucha or a tart cider. Each ingredient contributes in it’s own special way. For instance, Chaney root is an all natural root from Jamaica and it is used as a medicinal tonic that is packed with Iron and promotes excellent physical strength and a high sex drive. Cordyceps is a fungus that lives on certain caterpillars in the high mountain regions of China and has long been known as an effective tonic and aphrodisiac in Traditional Chinese Medicine. Cordyceps improve sperm quality as well as quantity and positively affects the release of sexual hormones such as testosterone in men and estrogen in women. Maca, the Peruvian herb, is a plant that has been known for its legendary ability to boost libido, deliver energy and enhance sex drive for more than 2,000 years. Everything in Love Tonic serves a special purpose and plays a role in delivering the perfect dose of all natural intimacy juice. A two ounce bottle can be consumed all at once or split between two people. There’s a nice 5MG dose of top shelf THC and 2.5MG of CBD creating a very good 2:1 ratio that gives you just enough of both to work in the best way possible. A CBD only version is coming soon and will be available nationwide. Love Potion 710 will be making more than just the Love Tonic. The Love Drops Tincture, Love Caps and pre-packaged Love Powder are all on the way too. Why be good, when you can be great? Try out the Love Tonic from Love Potion 710 when you can.

To see where the nearest location is carrying Love Potion 710 products, visit BuyEdiblesNow.Com. A veteran owned and operated company.