Chanukah is the Jewish eight-day, “festival of lights,” celebrated with a nightly menorah lighting, special prayers and fried foods (hence the oil).

The Hebrew word Hanukkah means “dedication,” rightfully named because it celebrates the rededication of the Holy Temple. In the second century BCE, the Holy Land was ruled by the Seleucids (Syrian-Greeks), who tried to force the people of Israel to accept Greek culture and beliefs instead of MITZVA observance and belief in G-d. Against all odds, a small band of faithful but poorly armed Jews, led by Judah the Maccabee, defeated one of the mightiest armies on earth, drove the Greeks from the land, reclaimed the Holy Temple in Jerusalem and rededicated it to the service of G-d. When they went to light the Temple’s Menorah, they found only a single jar of olive oil that had escaped contamination by the Greeks. Miraculously, they lit the menorah and the one-day supply of oil lasted for eight days, until new oil could be prepared under conditions of ritual purity.

To honor and publicize these miracles, the sages instituted the festival of Chanukah. The core ritual of Chanukah is the nightly menorah lighting. The menorah holds nine flames, one of which is the shamash (“helper candle”), which is used to kindle the other eight lights. On the first night, we light just one flame. On the second night, an additional flame is lit. By the eighth night of Chanukah, all eight lights are kindled. Prayers are recited before the lighting of the candles and traditional songs are sung.  It’s appropriate to spend time with your loved ones, watching the flames.

Remarking that one should spend time near the Chanukah lights after they are lit, the Previous Lubavitcher Rebbe, Yosef Yitzchak Schneerson would say, “We must listen carefully to what the candles are saying.”  What are the flickering flames telling us? Here are some messages: 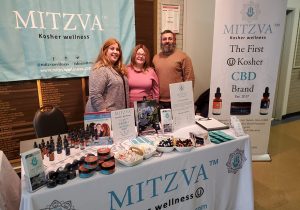 Mitzva Wellness, LLC. relates in many ways to the miracle of Chanukah. We strive to be a beacon, a light, in the industry and we don’t compromise to ‘fit in’. We operate in an ethical manner, using high quality materials, 3rd Party Lab-Testing and formulate to create effective and affordable products. We are small, but we are mighty! We believe in sharing our knowledge, our hope and our support to those in need. All we ask is to pass the MITZVA (“good deed”) on, and be a light in your own community, with acts of goodness and kindness.