Racist Ignatius: The Anti-Asian Attorney from the OC

We usually cover stories directly related to cannabis and the international medical marijuana industry, but when this racist hate speech story came up, we thought: This lady needs to smoke some weed and chill out.

Christina Ignatius, an Orange County wrongful death attorney and law school tutor, decided to make a long and rambling anti-Asian Facebook rant last week that was posted as a sort of protest against the movie “Crazy Rich Asians”. By Saturday the story had been picked up by Yahoo, Deadline, Raw Story and a few others including The Mercury News and The OC Register. It’s kind of significant to point out that Asia is Earth’s largest and most populous continent, has long been home to the majority of the human population, and covers a space of 17,212,000 square miles, about 30% of Earth’s total land area and 8.7% of the Earth’s total surface area.

There are well over 4 billion people in Asia living in over 50 different countries and speaking over 60 different languages. 15% of the 39 million people currently living in CA are Asian. Orange County has the third-largest Asian American population in the country, and that Orange County’s population is 20% Asian American. The rant itself is filled with a lot of insulting anti-Asian stereotypes. Some of them are unfortunately, typical of the kinds of things white morons say about Asian people. Statements about “tiger moms”, “rice rockets”, and “driving like an Asian”. She also never mentioned knowing anything about the film other than the title, which a friend apparently told her about.

“My friend said that there is something coming out called Crazy Rich Asians. It reminds me of all the Asians who flooded into Orange County and then took over our mall at South Coast Plaza… They will drive their Mercedes in the carpool lane and then cut across 5 lanes to get over to the mall, as if your car next to them didn’t even matter. That’s why we have the term ‘driving like an Asian.’”

Other things Ignatius went on at length about seemed pretty specific, and others quite personal. Apparently she’s been living in her own kind of OC hell and it’s mostly, but not totally, to do with her having to compete with Asian females for purses at the mall and for eligible men to marry. The chain of events that lead to Racist Ignatius’ misery were well documented in the bizarre FB post that has since been deleted.

These are the slurry highlights:

• Asian parents (Tiger Moms) [her words] pressure their children to become doctors (she actually said doctah’), or if they aren’t quite smart enough for that, lawyers.

• The Asian children grow up and take up way too much room at all the top American colleges.
• The Asian girls who aren’t smart enough to become doctors or lawyers poach and snare all of the eligible white american men at school and marry them, leaving no acceptable suitors for Racist Ignatius and poaching the dollars of the suckers they trap.

I feel like it’s important to point out that I am not making any of this up at all. She said all of this and more. Our company President, B. Le Grand, who is half Chinese, wrote a Crazy Rich Asians movie review in our latest issue and noticed the #RacistIgnatius story right when it broke. She brought it to my attention when she asked, “Did you see what this racist bitch wrote about ‘Crazy Rich Asians’”?

She posted this with another thing about “Never Saying You’re Sorry” and then something else with a picture of the Kardashian clan that said: “Did you post something controversial as a joke and then you hit the news? Congratulations! You now have a phenomenal platform.” 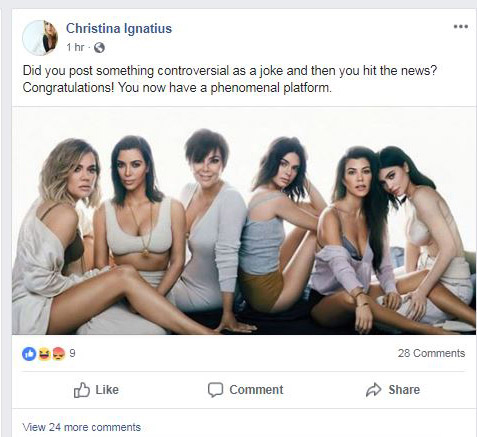 It makes it seem like she might have believed this would lead to her getting a reality show or that she’d be cast in something on TLC or Bravo? In a world of “Permit Patties” and “Barbecue Beckys”, it seriously seems delusional and tone deaf to think she’d be seen as anything other than a racist anti-Asian bigot who has no idea how social media works. Her Facebook page (which at the time of this writing is still up online) shows numerous pictures of her bragging about how luxurious and expensive life in the OC is, and how fancy her shows are.

Racist Ignatius later claimed the post was meant to be provocative, and that she actually loves Asian people and finds their differences “funny and interesting”. Le Grand says that statement is even more offensive, to deny the prejudicial tone of her original comment and claim it’s “provocative” instead. “Ignatius fails to realize that her saying, “…the differences are ‘funny and interesting,’” is in it of itself a racial and prejudicial remark,” Le Grand said.

Racist Ignatius recommends people buy and wear furs and diamond encrusted belts and that her goal is to become part of the one percent without having to marry into it. Her rant mentions that Asian women buy all the good purses before she gets a chance and that there are way too many Asians at the nice stores. She also says that the Asian women: “Came up with a shopping word called ‘snoshy’. It stands for posh and snobby.” If she didn’t know about the Crazy RIch Asians movie, how is it possible that she is quoting a direct line from the movie? It goes on and on and I’m tired of quoting her. It’s getting exhausting…

So, what’s the point? Why the hell would a lawyer in Orange County post this kind of nonsense? The chief of staff for the OC District Attorney’s office, Susan Kang Schroeder, was born in Seoul Korea and said on her own Facebook page: “I am saddened by your racist, insensitive and simply unacceptable post. It’s hard to imagine that an attorney in Orange County would make such an ignorant post in 2018.” She’s right. And what could Ignatius, known on Instagram as “Tenacious Ignatius” possibly have hoped the endgame might have been? The Alt-Right crowd doesn’t care about this do they? Are there other racists like her willing to publicly support her bizarre platform? She’s been taken off her school’s website and the Chapman University Alumni page. The Better Business Bureau already had complaints against her and there seems to be a unanimous feeling that she’s finished career-wise. I also heard a rumor on Twitter that she recently was broken up with by her first Asian boyfriend but couldn’t find any real evidence. There was also something about the greatest sushi ever being in Dallas.

This isn’t some dumb bigot getting caught up in a moment and accidentally letting a poisonous comment slip. This is a long, crafted piece she clearly spent a long time drafting before posting. I’m willing to bet she doesn’t use cannabis in any form or let anyone proofread her insanity before putting it up where it can be seen by so many. Was she made to feel bold by the current administration? The OC Register said Ignatius is getting death threats over the post. She says there was no malintent so she has nothing to apologize for. She also says she’s 38 and Orange County has had a large Asian population since the mid-1970s, so it’s not even like she grew up in the pre-civil rights era or whatever old Jim Crow excuses the old racists used to make.

Does Ann Coulter even support this brand of tone-deaf bigotry? I looked and seriously couldn’t find anything.