The Strange and Racist, Pagan, Drug Fueled Origins of Christmas

Christmas time is a strange and interesting time of year. So many traditions, customs, cultures and stories have been brought together creating the biggest and most confusing holiday in the world. What does Bethlehem have to do with the North Pole? Did Santa ever know Jesus? Christmas trees, stockings, silver bells, reindeer, wise men, elves and snowglobes.. It’s a bizarre collection of seemingly weird and random details that create what many consider “The Most Wonderful Time of the Year”. However, there is a slight logic to some of it and pure insanity to the rest. Blending pagan Winter Solstice traditions with Roman and Christian myths and stories have left us all  with a holiday we wait all year to celebrate and barely understand. After being repackaged by Charles Dickens and Coca Cola, Christmas in America has a specific aesthetic, but the history of what lead to the Yuletide of today actually has more drugs, spirits, racism and child abuse than most people realize. Here we present The Strange and Racist, Pagan, Drug Fueled Origins of Christmas! Enjoy, and Merry Christmas. 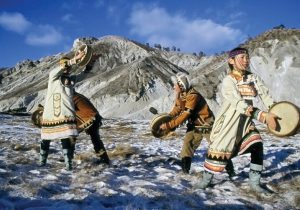 Santa and Psychedelic Mushrooms of Siberia

The Evenki were northern Tungusic people who were predominantly hunter-gatherers as well as reindeer herders. Their survival depended largely upon the health and vitality of their domesticated reindeer.  The reindeer provided the Evenki and other northern tribes with everything from clothing, housing material, wares and tools from the bones and antlers, transportation, milk, as well as cultural and religious inspiration. The Evenki were also a shamanic culture. The word “shaman” actually has its roots in the Tungus word saman which means “one who the spirits.” A significant aspect of the shamanism practiced in this part of the world during that time was linked to the Amanita muscaria, also known as the Fly Agaric mushroom. This special psychedelic fungus was held very sacred by these ancient Siberian people, and was used by the shaman and others for ceremonial and spiritual purposes. When out collecting mushrooms, people would pick a bunch of them under the evergreen trees and lay them out along the branches while continuing to pick the mushrooms beneath other trees.  The result was something that looked very reminiscent of a modern Christmas tree: evergreen trees whose branches are dotted with bright red, roundish “decorations” – in this case the sacred mushrooms. The shaman or harvester would go around to each of their mushroom stashes and put them all in one large sack. Remind you of anything? Not only this, as the story of the tradition goes, the shaman would then, carrying this large sack, visit the homes of his or her people and deliver the mushrooms to them. They would then continue the drying process by hanging them in a sock, near the fire. In the racist Dutch tradition, Sinterklaas made his home in Spain, and traveled to the Netherlands once a year, about a month before Christmas, to menace, abuse and perhaps kidnap disobedient children, aided and abetted by his gang of dark-skinned Arab slaves. Zwarte Piet (also known as Black Pete) is the most famous companion of Saint Nicholas in the folklore of the Low Countries. Traditionally, Zwarte Piet is black because he is a Moor from Spain. Nowadays the character is considered incredibly offensive and racist. 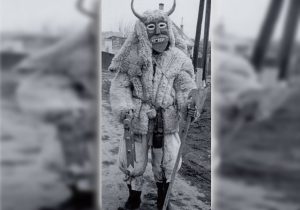 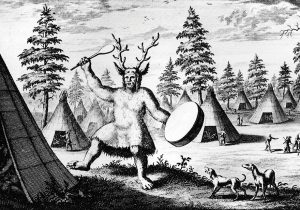 In Pagan times, the area’s now encompassing present day Lithuanian, Poland, Germany and Russia celebrated the Slavic holiday of Koleda. Koleda was celebrated around what we know as Christmas time and is a celebration of the god Koliada who is a Slavic pagan deity symbolized by the weak winter Sun that is reborn the morning following the winter solstice. On the Eve of Koleda, a sacred rite would be performed called Koleduvane. Unmarried young men would suit up dressed as “Koledari” and venture out into the night. Koledari are Slavic traditional performers of a ceremony with costumes split up into 3 main categories:

Dressed as a pregnant woman, the ‘Bride’ is the main character in this cast of. She symbolizes both the death of the old moon and the birth of the new one. The Bride, as the star of the show, would be seated on a wooden hemp breaker. The Koledari would carry the Hemp Breaker as if Bride was riding a horse from house to house. That’s right, a hemp breaker horse. Not enough, Bride seated on top of the hemp breaker horse, would be spinning hemp to thread using a distaff. The Koledari and Grandpa would poke fun at Bride the whole night to bring a comic side to the festivities. The whole group would venture out on Koleda eve at midnight, traveling house to house. The group would sing the special Koledo songs lead by the Grandpa character. Traditional songs would be sung with the word “koledo” sprinkled in and with every sentence ending in a special koledo chant. After the singing and dancing in front of the home, the Koledari group would then rummage house searching for evil spirits that are hiding. After finding the evil spirits and ghosts, the koledari would chase them away to guarantee a bountiful harvest in the coming year. The homeowners would then give the group some heckled hemp fibers to pay for the exorcism service. The heckled hemp fibers were made into thread by the riding Bride. This special thread symbolizes fertility which would eventually be turned  into newborn baby clothes.

In Central European folklore, Krampus is a horned, anthropomorphic figure described as “half-goat, half-demon”, who, during the Christmas season, punishes children who have misbehaved. This contrasts with Saint Nicholas, who rewards the well-behaved with gifts. He’s basically like a giant, less racist, monster version of Zwarte Piet which actually him preferable. The history of the Krampus figure has been theorized as stretching back to pre-Christian Alpine traditions. Krampus carries chains, thought to symbolize the binding of the Devil by the Christian Church. He thrashes the chains for dramatic effect. The chains are sometimes accompanied with bells of various sizes. Of more pagan origins are the Ruten, the bundles of birch wood branches that Krampus carries and with which he swats naughty children. In many parts of Croatia, Krampus is described as a devil wearing a cloth sack around his waist and chains around his neck, ankles, and wrists. As a part of a tradition, when a child receives a gift from St. Nicholas he is given a golden branch to represent his good deeds throughout the year; however, if the child has misbehaved, Krampus will take the gifts for himself and leave only a silver branch to represent the child’s bad acts. The beast’s name comes from the German word krampen, meaning claw, and shares characteristics with demonic creatures in Greek mythology like fauns and satyrs. Due to his devilish appearance, Krampus celebrations were banned by the Catholic Church in the 12th century. Even fascists in World War II allegedly found fault with Krampus because they considered him a creation of the Social Democrats. Now Krampus is also a strain of cannabis that is a sativa dominant hybrid with a smell that is earthy, cheesy, and minty with a taste that’s earthy, piney, and diesel. 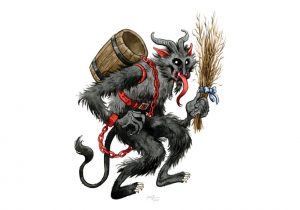 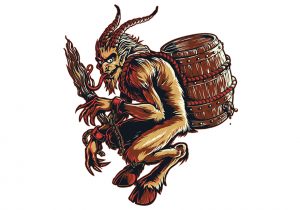 And lastly, if you look at traditional depictions of the actual Saint Nicholas, he’s clearly a Klingon. I mean, the guy looks almost exactly like Worf, son of Mogh from TNG and DS9. Why isn’t that something people talk about more often? Ancient Aliens may have mentioned it but I’ll need to go back and see if they ever did a holiday special. 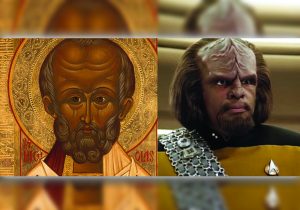 So this Christmas, celebrate in style by eating mushrooms, smoking weed, singing, not being racist, and be friendly to elves and demons. Happy holidaze to all and to all a good night!