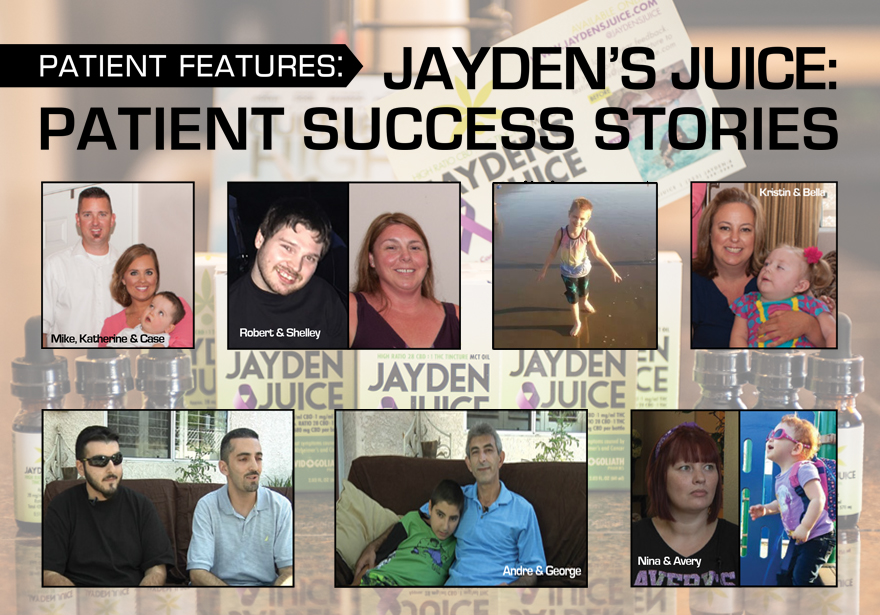 Paul has a child who developed autism at age 2., it was shortly eafter his son received a round of vaccinations and four months later he was given the same shots, due to an error made by his doctors. His son remained untreated for a year. As a pharmacy tech Paul knew there were no medications specifically for autism; he knew he would have to give his son highly potent pharmaceuticals with horrible side effects. At three, he became incredibly violent and Paul & his wife had to do something. He knew Jason & Jayden through church and knew about their journey. He turned to Jayden’s Juice. They administer the oil to their son by putting a couple of drops in his food. Instantaneously they noticed monumental differences. “It balanced him out, he started eating more and sleeping better,”
explained Paul.

George is an epileptic patient who experienced his first seizure at 24 years old. He learned about CBD through dispensaries as a medical marijuana patient. He did his research and came into contact with Jason David & Jayden’s Juice through his brother. Prior to using CBD and THCA, his doctor was using him as a “test dummy”. He was becoming depressed and had a hard time maintaining a normal life. He was given several pharmaceuticals on a trial and error basis. Since starting Jayden’s Juice, he has gone from four pharmaceuticals to one. He admits that not every day is perfect, but his quality of life has vastly improved.

Andre has autism and Jason is his cousin, so he was familiar with Jason & Jayden’s Journey. When Andre first developed autism, George went to a doctor who prescribed them twelve medications and George just could not do that to his son. They never used pharmaceuticals on Andre and prior to using Jayden’s Juice he was combative, mute, and did not eat or sleep. After beginning Jayden’s Juice, George explained that Andre “made a complete 180 and is a success story. He interacts with people. He eats; he sleeps and he’s not combative anymore and is doing really well in school – all thanks to Jayden’s Juice.” When they first tried CBD it did not work, it made Andre hyperactive, so they tried THC. He explained that he tried both THC and CBD on himself before administering it to Andre and he had the same symptoms; hyperactivity with CBD and THC worked better. George’s message to parents: “Give it a try. If it doesn’t work, then it doesn’t work, [but] if it does then be happy. It’s about our kids, about a better life [and] we’ll do whatever it takes, (legal or not), to give them a better life.

Case has a genetic deletion syndrome and began having seizures at four months. His genetic deletion mimics MS, he has vision problems, and has epilepsy on top of everything. Katherine and Mike took him to a neurologist that started him on various pharmaceuticals. He began having more seizures and increased irritability. He started taking Jayden’s Juice at eight months. It helped to wean him off of synthetic drugs and live a more normal life. When they first tried to treat Case, they felt as though cannabis was not for them; but once the pharmaceuticals failed they prayed for help and God led them to cannabis. He is completely off of pharmaceuticals now. Currently, he takes eight drops of THCA in the morning, 1mL of Jayden’s Juice midday, and 1mL of Jayden’s Juice at night. Katherine explained, “It took some time for him to get to where he is. We felt like he would come alive when he took Jayden’s Juice.” He went from close to 500 seizures a day to one or two when he first wakes up.

Avery has been diagnosed with Dravet syndrome and experienced her first seizure at seven months that lasted one and a half hours, but was not diagnosed until she was eleven months old. Three days later she had another seizure and about every ten days thereafter she would have a seizure lasting up to 3-4 hours. Nina explained that Dravet syndrome is different than epilepsy where they will experience daily seizures. After age two, the patient will regress and experience seizures more frequently. As soon as Avery was diagnosed, Nina turned to Google in search of information on Dravet syndrome; Jason & Jayden were the first results that came up. She went 6 months seizure free when they first started and saw major improvements developmentally. At 1 years old she could not walk or sit up nor could she hold her head up. Immediately after starting to use Jayden’s Juice, Avery started pulling herself up. Avery uses a mix of THCA and CBD daily and THC as necessary. Nina explains that now after using Jayden’s Juice, “[Avery] is almost a typical two year old, and most importantly she’s happy.”

Bella had her first seizure at two months old. Kristin began giving Bella Jayden’s Juice seven months ago, but has been using CBD for about sixteen months. Since beginning CBD, they have seen a 75% decrease in seizures and since using Jayden’s Juice that percentage has continued to climb. The number of seizures Bella has per day went from 12-24 to 3-4. They are continuing to wean Bella off of pharmaceuticals and increase the CBD for better seizure control. “It’s a medicine, and it’s a plant that God created, it’s not something to be afraid of,” said Kristin. She explained that Jason had originally reached out to them when Bella was two months old. They thought he was a crazy person trying to get them to put their daughter on cannabis. It took a couple of years and several failed pharmaceutical attempts to realize they needed to get back in touch with Jason. Kristin had a message for parents who have children with epilepsy, “Consider this as a first option, not a last resort because it’s so hard to wean [them off of] the pharmaceuticals once they are on them.” She emphatically believes in cannabis and even moved from Nevada to California, so they could access CBD oil for Bella.

Robert is a 25-year-old man with epilepsy. He had his first immunizations at three months old and within 24 hours he had seizures, a stroke, and a fever of 105 degrees. About five weeks later, the hospital told his mother Shelley that he would never function as an adult; he would be completely deaf and blind. He is totally deaf, but can see in front and to the right of him, has severe brain damage, but “has more get up and go than most people – he’s awesome,” explained Shelley. She met Jason through social media and he was her reference point. She explained they tried CBD from a couple different dispensaries, but the budtenders just did not know anything. At first, CBD did not help the seizures, but it did help him cognitively. They learned it was conflicting with another anti-epileptic drug and took him off of it after only five weeks. Now, he is using the Jayden’s Juice THC oil and went four days seizure free after starting. His seizures are now milder and the recovery time is much faster. He went from 3-4 seizures a day to only having them every 4-7 days. He only takes four drops of THC, two in the morning and two in the evening. Eventually she opened her own collective to help other parents and children. If parents wanted to grow their own plants she would help them.