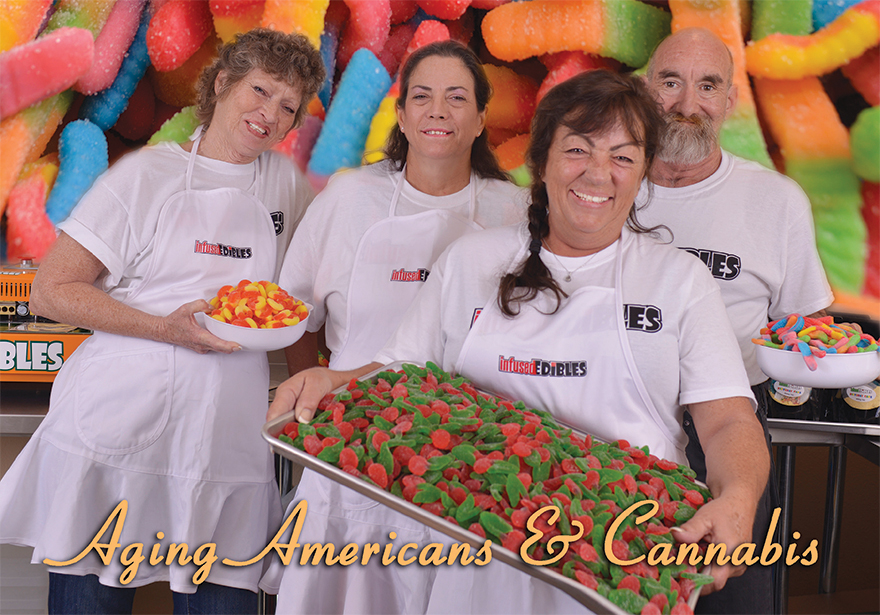 As we drove through the desert on a seemingly never-ending road, I wondered what the hell we had gotten ourselves into when we decided to do this story. I suddenly realized that I was no longer in my safe place – that is Downtown LA – anymore. We were in Desert Hot Springs getting ready to walk into the Infused Edibles factory.

The dashing co-owner Chris immediately welcomed us upon arriving. As we entered, we were greeted by the sounds of infectious laughter and music. The space had been set up previously as a dispensary, so it was the perfect location for a cannabis candy company!

There were three ladies and one gentleman having the time of their lives gabbing and working away, bagging and tagging all types of gummies – bears, belts and worms, oh my was It was a magical site!

Chris introduced us to his team – Miss Sue (Chris’s mom & co-owner), Miss Vicky, Miss Linda and Mister Dave. Aside from Chris who is 31 years old, everyone on his team qualifies for the senior discount at the movie theater. However, despite the fact that they are not 25, they can pump out thousands of bags of candy a week!

The co-owner affectionately spoke about his rowdy team, “Everyday is like a social gathering. Everyday we come together and talk about our lives, we care about one another, and we laugh and cry together. We care about what we’re doing and the patients we help,” Chris lovingly expressed.

Chris who was a chef by trade and his mother Sue began the company almost three years ago. Sue’s background was in accounting and was working with a dispensary helping them with bookkeeping in Santa Cruz. Chris was managing the same dispensary therefore; they would see all of the edibles that came through the door. They saw all of the wasted products that would be tossed out and thought there had to be a better way. After starting out with toffee in a jar and spices mixed with kief, they moved into gummies because the shelf life was longer and frankly all of the gummies they had tried tasted horrible.

We discussed his reasoning behind hiring aging Americans instead of younger people, “Imagine someone who has gone through cancer three times and they have had both their breasts removed and they are in the hospital cheering up other people. That says something about them. Then you hear they are also raising their grandchild and taking care of their elderly mother simultaneously, what do you do? You give them a job, because that is a strength we can all draw from” Chris said with tears welling in his eyes, speaking of Miss Vicki.

The truth is that with older people comes a strength and wisdom that only comes from being on the Earth for many years and making it out alive through several situations. Though with age also comes with some limitations. Chris joked about how sometimes the team will make mistakes here and there, like putting THC edibles into CBD edible bags. He also explained that with an aging staff comes a set of limitations that you would not normally face i.e. vision, weight lifting, etc., but he would not trade his team for anything.

The Team Behind Infused Edibles
Miss Vicky began working with Infused Edibles after meeting Miss Linda at the Palm Desert Regional Hospital during the latter part of her chemo treatments. Their appointments were back to back, so they eventually got to know each other. Miss Linda had an Infused topical, which is made using industrial hemp CBD and a hypoallergenic, fragrance free, medical grade lotion which she introduced Miss Vicky to. She began using the product for the burns she had from radiation. She also began taking CBD edibles in lieu of her highly addictive medications she was prescribed to. She was diagnosed with stage III HER-2 breast cancer. It was very aggressive and had spread to her lymph nodes as well. Miss Vicky has been an avid cannabis user since the age of 16. Miss Vicky had us in stitches throughout the entire interview.

Miss Sue with a 25-year background in accounting for mainstream industries never thought she would be in this industry. Her company laid her off and it was then that a dispensary in Santa Cruz ended up hiring her to help them become legal i.e. set up the business license, bank accounts, etc. She explained how there were kids just going to the dispensary to get stoned, but there were also the real patients – the elderly people, the moms trying to help their kids and those will serious illnesses all turning to cannabis to improve the quality of their lives. In happy tears, she recalled how far the business has come in almost three years. She told us story after story about their products helping people and how she wishes others she knows would stop being adverse to cannabis and try it. We discussed how the stigma against cannabis is still prevalent even among her friends.

Miss Linda and Mister Dave are a wonderful pair who have been with Infused for a couple of years now. Miss Linda is quite the animated person meanwhile Mr. Dave is a bit more reserved. They met Chris through a mutual friend and ultimately came to work for the Infused brand. They both use cannabis products for arthritis and other symptoms. Miss Linda was taking 30 lactate pills a day just to be comfortably eat cereal, as she suffers from serious stomach issues. Now, she takes CBD oil three times a day and it provides the same relief. Neither of them ever thought they would end up in this industry, but they both feel as though cannabis has changed their lives for the better. Linda was also diagnosed with breast cancer and used cannabis to help get through the radiation treatments.

We had such a great time chatting with the lovely ladies and gentlemen behind the gummy sensation – Infused Edibles. We even got the low-down on which products are their favorites:

The Infused Edibles team is a family. They are a family that cares about what they are doing and who they are helping. Infused Edibles offers a wide array of products that not only taste good, but are extremely effective. They are not the typical company found in the cannabis industry. They do not have large backers and have built their company from the ground up. There is not a doubt in our minds that Infused Edibles will make it through. Though this company may be small in comparison to others, it is mighty!