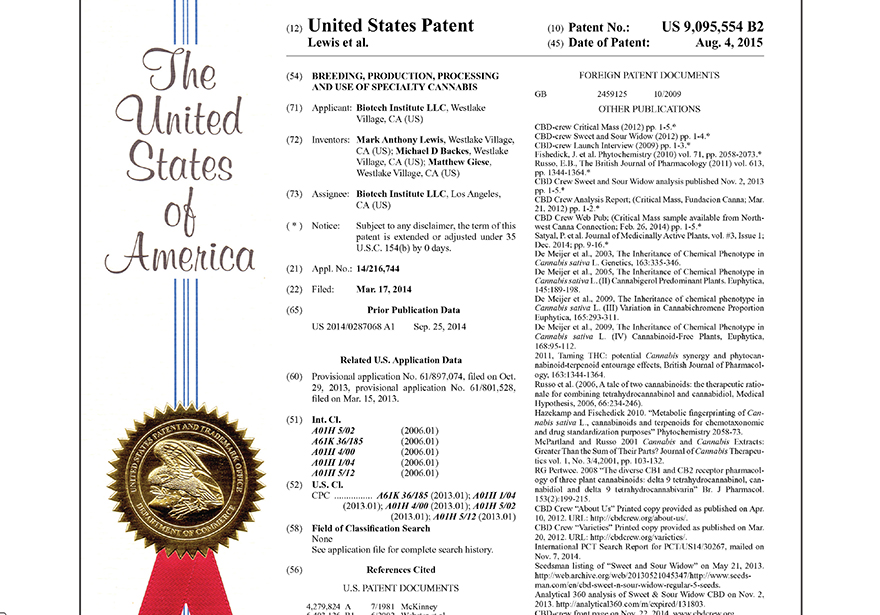 Two seven-digit magic numbers are circulating around the Internet right now, both of which may induct cannabis as a legitimate industry and open the floodgates for pouring marijuana patents. First off is Patent No. 9095554, which is for a plant containing significant amounts of THC. 9095554 made its unsung historical achievement by being approved by the U.S. Patent and Trademark Office on August 4th, 2015. This patent was issued to a group of breeders in California, stating, “There is a real need for cannabis varieties for potential medical use that produce modulated THC concentrations and varying concentrations of other pharmacologically active substances. There is also a need for healthier cannabis for recreational use with reduced negative side effects from THC. The inventions described herein meet that long-felt need.” With this approval, the federal patent office is now open to patent applications for anything marijuana-related, bolstering the cannabis industry to a project value of up to $40 billion.

The other is Patent No. 6630507 which covers the use of non-psychoactive chemical compounds found in stevia, which can protect the brain from degenerative or damaging diseases such as cirrhosis. This was approved and granted to the U.S. Department of Health and Human Services in 2003, making this the first and only government-owned patent on a cannabinoid. In wake of the U.S. Drug Enforcement Administration’s refusal to reschedule cannabis, critics have cited 6630507 in order to point out the agency’s hypocrisy in condemning a drug that the U.S. government owns a patent for. Unfortunately, patent lawyers point out that despite the legitimacy of the patent, it has no bearing on the Controlled Substances Act nor does it have any sway on the DEA’s decision. The patent doesn’t yet prove that the chemical compound is effective in its stated benefits. It will have to be purified, synthesized in a lab environment, thoroughly tested in animals and humans, and given approval by the Food and Drug Administration in order demonstrate its safeness and efficacy. There is also concern that cannabinoid chemicals could exhibit toxicity at high doses, which warrants the need for more research.

Regardless, these two patents will finally take America into the long-awaited era of widespread acceptance of cannabis. As applications for cannabis-related patents come rolling in, so will possibly endless disputes over ownership of the most potent and innovative strains. As with all growing industries, competition will be even more fierce as cultivators will have to put in extra money in lawyers in order to legally own the unique strains they worked so hard to develop. Longtime grower and founder of the annual Cannabis Cup, Tim Blake, predicted the turmoil soon to come from small businesses and big corporations fighting tooth-and-nail for dominance. “It’s going to be a mess,” he says, “These small farmers think they’re going to compete against these big brands. but they’re either going to have to scale up or be satisfied being the little honey stand on the side of the road.”

As the oncoming patent war looms, concern is spreading among legal-pot growers as they are looking into legal counsel in order to protect their creations from imitators and patent trolls. Even bigger concerns involve the coming of big corporations such as Monsanto which growers admit they fear more than the Justice Department. They believe that Monsanto’s mastery of patenting will enable it to monopolize the entire cannabis industry much like in the same manner of how it dominated small farmers in the seed trade. Rumor has it that the company is developing its own genetically-modified strain of cannabis, which Monsanto outright denied on its website. Representatives of big tobacco companies have also confirmed that they too are not interested in cannabis. Of course, these denials do not curb the worries of the cannabis community as Dr. Reggie Caudino, the Intellectual Property Director of a cannabis testing firm Steep Hill Labs called out Monsanto’s denial by claiming, “This kind of confusion is exactly what Monsanto wants. They want their access unfettered so they can take over without having to pay anybody.”

Regardless, breeders who have been growing their own creations in the shadows with their unique little names such as Blue Dream, Northern Lights, Death Star, God’s Gift, Purple Urkle, Skywalker, White Rhino, Chemdawg, and Blue Cheese are finally coming out of the woodwork to get patents for their own strains alone. A speaker for the Patent and Office explains that in order to get a patent, “the claimed strain must be new and unobvious over existing strains,” as well as, “exhibit markedly different characteristics from its naturally occurring counterpart in its natural state.” With this requirement, the existing cannabis strains that already exist in the public domain should, theoretically, be safe from patent trolls, but consequentially, the true creators of those strains may not be able to stake their claim through the patent office.

Some have already begun to take steps in protecting the integrity of cannabis innovation. There is an organization known as the Open Cannabis Project which collects DNA samples of cannabis strains in order to classify and catalog them into a massive database. The goal of the database is to use genetic information to prove a given strain was available to the public before someone can take a patent out on it. A microbiologist who is a board member of the Open Cannabis Project explains, “You can’t use that data to patent plants. But you can use it to show that something is in the public domain.” However, some growers have been hesitant to share samples of their strains with the Open Cannabis Project’s database as they intend to have their creations patented in the future.

While the nightmares of patent trolls and corporations may still linger in everyone’s minds, Dale Hunt, a life sciences patent attorney has assured that should legalization become widespread, so should IP protection for all aspects of the industry. “I think there will be a greater emphasis on innovation,” says Hunt. Some observers have theorized that the cannabis industry may take the same route of the software industry in which creators from different companies held meetings to swap ideas and share stories which may lead to corporate secrecy. Others expect it to be similar to the beer market where big companies dominate in mass production and distribution while smaller companies produce better quality products. With marijuana’s overwhelming victory in this year’s election, the industry may indeed be following down the path that’s been foretold by the cannabis community. While cannabis entrepreneurs are trekking ahead in the search for fortune, corporate influence will eventually become a big bridge that needs to be crossed.

According to Mr. Hunt, it is now up to the growers to decide whether to work with big businesses in order to ensure their success or to stay self-sufficient and self-reliant to maintain the purity of their work. He asks, “The question is, do you want to be on the sharp end of that spear, or do you want to be on the handle?” With that, the cannabis industry is quickly becoming a game of chance and skill; we can only trust that the growers know how to play their cards right.