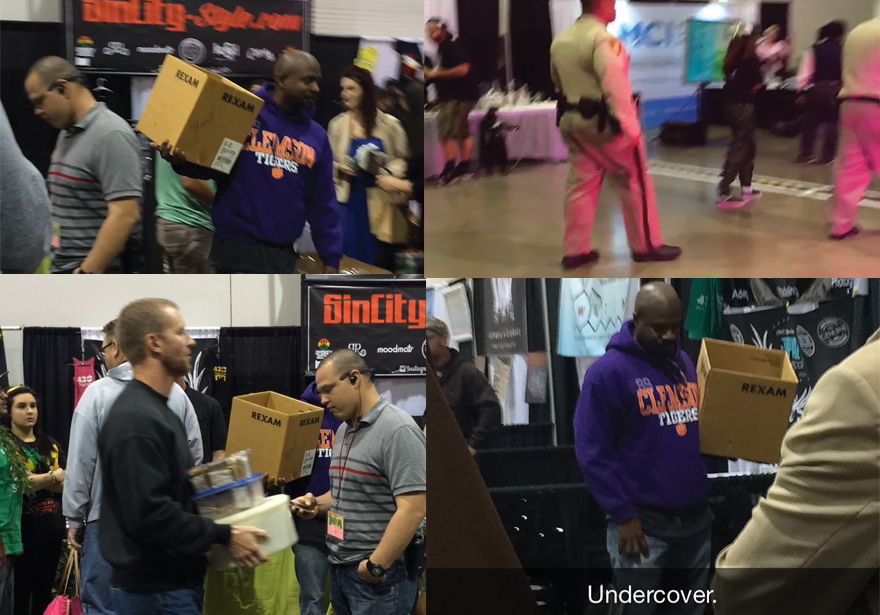 Las Vegas, NV – Vendors and attendees showed up on May 15th-17th for the first ever HempCon Las Vegas at the Cashman Center.

Alleged rumors circulated before the event about the potential of undercover cops checking out the event Friday and Saturday, planning to make their drug trafficking arrests by Sunday.

Our team drove up to the Cashman Center with only an hour left in the show for Friday, only to find police arresting vendors and confiscating product as well as personal supplies of medicine from exhibitors.

At least ten people are known to have been detained at the event – two of those vendors could be facing life sentences for drug trafficking. Companies attending the event were under the impression they were in fact compliant with local laws at medical marijuana conference, specifically for licensed caregivers and patients.

HempCon designated iBudtender as the sole mediator of vendor space. Vendors were sold on the idea that they were allowed to sell product at the event to recoup the cost of the booth and expenses, even though the contract details confusingly stated otherwise.

In an interview with Dabs Magazine, owner of Infused Edibles said, “We felt conned at HempCon. Anybody who read the contract had the same questions as us.”

Even a CBD topical vendor was arrested for personal possession of cannabis. Three people were cited on additional charges, including Schedule 1 drug trafficking, conspiracy to distribute, and possession with intent to sell.

Other edible vendors we interviewed conceded that iBudtender had advertised they would be able to sell product at their booths, stating to them, “Why wouldn’t it be like any other Hempcon?”

According to law enforcement HempCon had communication with not only Las Vegas Metro Police and officials from the city’s business license agency, prior to the actual event date. When Dabs Magazine contacted HempCon for a statement, Tony Z., Senior Business Relations, refused to comment and directed them to HempCon’s official statement:

“We deeply regret the unfortunate police activity during Las Vegas Hempcon over the weekend of May 15-17. It was a blow to our Vendors, the attendees, the Community as a whole, and to us as well. It is sad that our industry is subject to such indiscriminate and prejudicial behavior by law enforcement. But we as a Community will PRESEVERE and not let our forward momentum be derailed by them.” -Hempcon Staff (We can’t help notice they spelled persevere incorrectly.)

Shawn Collins and Alicia Beuter (team members of Infused Edibles) were arrested on drug trafficking charges. They originally had a bail set of $30,000 each person, until Channel 8 News Now Las Vegas ran a story on Sunday evening immediately following the event. The next day, Collins and Beutern we released without on their own recognizance without retaining bail for the felony charges

The Medical Marijuana Establishment Program in Nevada supervises caregiver licenses in Nevada. It is one of the few states that has a designated a body of government to oversee cannabis industry licensing. It is legal to be a patient and have a licensed dispensary in Las Vegas; it is not legal to sell cannabis without a state-issued dispensary license. Although the state of Nevada acknowledges reciprocity, (they accept out-of-state marijuana doctor’s recommendations), it is still a Schedule 1 drug Federal, which prohibits the transport of medicinal cannabis across state lines.

Infused Edibles’ team members said they were wary of the legal situation and did not originally bring in their cannabis infused THC products. An iBudtender staff member, approached them inquiring as to why they did not have medicated products at their booth. They said that they were encouraged to vend their products, and they were assured there would be no legal consequences. Beuter and Collins brought out their THC edibles and concentrates. Shortly thereafter, they were arrested and all products were seized.

This event comes one month after the infamous 420 High Times Recreational Cannabis Cup in Denver, where all vendors were issued a letter from law enforcement just days before the event, stating that if any cannabis was to be sold at Denver Mart (the official 420 Cannabis Cup location), they would be Federally indicted and lose their marijuana licenses. Currently, licensed Colorado dispensaries are only legally allowed to sell cannabis at their state sanctioned locations. Yet, regardless of some vendors selling cannabis at the cup anyway, no raids or DEA arrests took place.

Whoever is at fault, it is clear the cannabis industry is still a operating in the gray. We admonish our readers to be wary and extremely careful while traveling with cannabis products, whether domestically or internationally. Laws vary state-to-state and country-to-country, and until cannabis is fully legalized and re-scheduled in the United States, we must comply with local, state, and federal regulations to avoid any legal ramifications. Additionally, we encourage you to vote in November 2016 to help facilitate cannabis reform in your state!