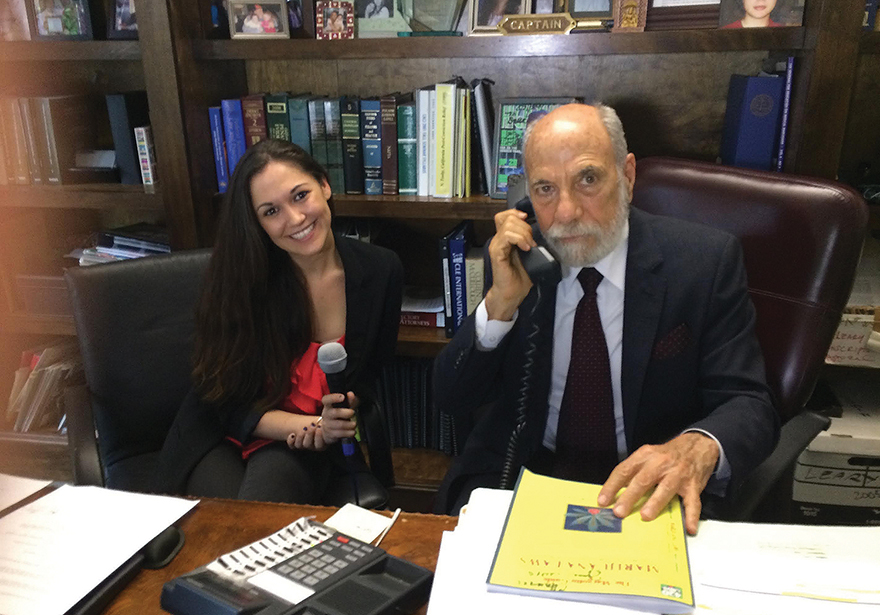 Edibles List Magazine got the distinct honor of sitting with the most well-known marijuana attorney ever, Bruce Margolin. Here are excerpts from that interview.

EL: We wanted to talk about hemp activism and cannabis reform today and hear a little bit about what your path in the cannabis industry has looked like. You started your practice when you were 25, right?

EL: So how long have you been in the industry?

BRUCE: Well, I have been defending marijuana cases since 1967. I am proud to say that I have defended more marijuana cases than any other lawyer in the country successfully, as well. I have also been involved with reformist activities. I ran for public office way back in 1968, ‘69 and ’70. I ran for US Congress and Governor of California, always on the marijuana platform and tried to show the legitimacy of that platform in the public arena. Luckily, I didn’t win or I would be stuck in Congress somewhere, but what I did was affect the way people think about the legitimacy of that policy. Since then, I have also been the head of NORML since 1973. Before becoming Director of Los Angeles NORML, I quit an organization called Coalition for the Abolition of Marijuana Prohibition (CAMP). So, I have been down for the cause a long time. Because of what happened in the first year of my practice, I saw in the courtroom how horrible it was to put young people in the same places as robbers and rapists. I was shocked it was over marijuana cases.

Ultimately, when I would defend these cases and maybe some would face the time for sentencing on a case, I would think to say to the judge “You know the ABA standards (the American Bar Association standards) on punishment, is really supposed to be based on the intended wrong.” And I’d say, “tell me what’s the intended wrong, Your Honor, in a case of something involving marijuana.” Ultimately, they had no answers for that. The answer was simply, “You broke the law that’s why you are being punished.” So, I realized that changing the law was the only way to resolve my frustration over the idea of people going to jail for marijuana; try to change the law, so that this would not happen. Over the years we’ve been able to effectuate all kinds of change. When I first started my practice, possession of any amount of marijuana was a felony which was punishable by 0-5 years in prison; and people did go to prison for five years. And since then, we’ve been able to pass many legislations, and many new laws in California. We’re on the verge now, after many years, of finally legalizing marijuana in California; which I think will happen in 2016.
EL: What does Prop 215 actually do for MJ convictions?

BRUCE: In 1996, we passed Prop 215, which established medical marijuana laws for patients and the ability to grow marijuana for personal use, but nothing else. So, that made all kinds of problems with transportation and people wanted to share marijuana with other patients and there was nowhere to buy marijuana legally. Senate Bill 420, provided a whole new area of protections for patients. It provides basically, that patients can grow 6 mature plants or 12 immature plants and have up to 8 ounces of bud (flowers) and that shake doesn’t count in the equation. So, that was a big break, in a lot of ways, but really that only provided protection for those limited amounts.

EL: I know you have an app, the 420 Laws app. Can you tell us a little about that? I heard there is an interesting feature, the panic button.

BRUCE: Well, let me just say, everybody has their own view of how they should handle things when they come up. For example, you’re talking to a police officer and you might want to cooperate to some degree and pass the attitude test – that might help. Our recommendation is that when you get pulled over, you listen to my app. The app provides not only my guide to marijuana; the guide also includes all 50 states laws. Matter of fact, it’s a guide that I’ve been putting in the marketplace for 10 years. We are giving it to the public and it’s on my website for free as well; we put it in all the dispensaries, but the app in particular, is free as well.

It also provides a panic button, which automatically comes up in about 15 seconds. That panic button tells you how you might want to act towards a police officer when being detained, particularly for a DUI. What people don’t know is that they’re not required under the law to take any tests. The app suggests that you ask the officer why you’re being detained and leave it at that, without answering any questions. If they tell you they want you to take a field sobriety test, you can say, “Officer, I’d prefer not to take any tests.” Of course, ultimately you have to take a blood, breath or urine test, otherwise you lose your license for 6 months, but when it comes to medical the use of medical marijuana there’s no standard of proof that automatically makes you guilty, unlike alcohol. Typically, they use they way you drove, why you got pulled over, the field sobriety test or the statements that you made about when you use and how often you use. Those are the mistakes people often make, thinking they’re going to talk their way out of it and typically they put their foot in their mouth. Additionally, just because you’re a patient doesn’t protect you.

EL: So one of the biggest things we have noticed within my generation is the lack of awareness for the
pioneers who really brought forth the industry to
where it is today, you were one of those people.
Who are some the other people?

BRUCE: There were many of them, but what comes to mind and many people’s mind is, Jack Herer. I’ve known him since the late sixties or early seventies. We were buddies for many, many campaigns together. Matter of fact, in this office we ran a campaign for legalization back in the seventies. We had people all over the place and Jack and I would hang out a lot. He was, shall we say, a very boisterous personality and he was very enthusiastic about the project. He lived on the streets and really put himself out there, in the thick of all it. He was also quite an entrepreneur and had quite a few products and all kinds of ways to make money to make a few bucks on the side. Him and I traveled together; we went to many organizations and meetings together. He used to come to the NORML meetings and shake those up all the time. We used to do these events at the Federal Building in Los Angeles, because you have a right to demonstrate there. These events were kind of a springboard for all of the festivals that we have today about marijuana and all the aspects of and products that surround it. Jack used to travel all over the state and basically live in a van, but yet he had a home base in Van Nuys and had children. He wrote a very important book it, was called, ‘The Emperor Wears No Clothes.’ In the book, he studied and researched what happened and how marijuana became illegal.

EL: Jack Herer was very eccentric. How was it working with him and his eccentricities?

BRUCE: Let me tell you, in the beginning of this, when I first met him he was a little bit hyper. He was, let’s just say, very explosive. He’d be yelling and screaming all the time and he was very difficult in the meetings we’d have. He’d do his best to take over the meetings and be very defiant. He was also very much against these organizations, including NORML itself. He would come to our meetings and disrupt them, but over the years he calmed down. He realized the importance and value of building a reputable organization, that speaks rationally and intelligibly about the issue. His views were very extreme in some ways, for me they were very real and very right. That’s what the California Hemp & Health Initiative (CHHI), also known as California Cannabis Hemp Initiative (CCHI), which he basically wrote, includes many things that I would like to see in our next initiative. Most people refuse to think it’s going to be possible to pass.

EL: We think it’s most important that everyone know their rights, know the laws, and just be aware. A lot of people don’t know that they actually charge you by total weight, not grams or milligrams in marijuana edibles.

BRUCE: The Federal court, defines the drug as a ‘substance containing marijuana.’ That means you can have a pound of chocolate and a gram of weed, and you’re going to be charged with a pound of weed. In California, we don’t have that; so that’s why they’re unable to prosecute edible cases.

Kamala Harris is our Attorney General in California, who should be writing new guidelines. Senate bill 420 states that, the Attorney General of the state, should write guidelines as to how the law should be interpreted. Jerry Brown wrote these in 2008, but since that Kamala Harris had not been able to come up with new guidelines. She claims she wrote a letter to legislature, in 2011, asking them to clarify medical marijuana laws; including the formation and operation of marijuana dispensaries, the definition of profit, and concerns about edibles.

EL: A lot of people don’t know that marijuana Schedule I drug and it has no medical benefit benefits, according to the Federal Government. How long do you think it’s really going to take federal government to change that?

BRUCE: Unfortunately, we just had a ruling by a federal judge where we thought that person was going to finally say, it’s an irrational claim; that there are no medical benefits. Sure enough, they sucked it up and voted for the government again. So, I don’t know how long it’s going to take and I don’t know why they’re holding on to this; except that behind-the-scenes is the pharmaceutical companies. They don’t want to legalize marijuana, because you’re not going to use the Advil, you’re going to be smoking a joint.