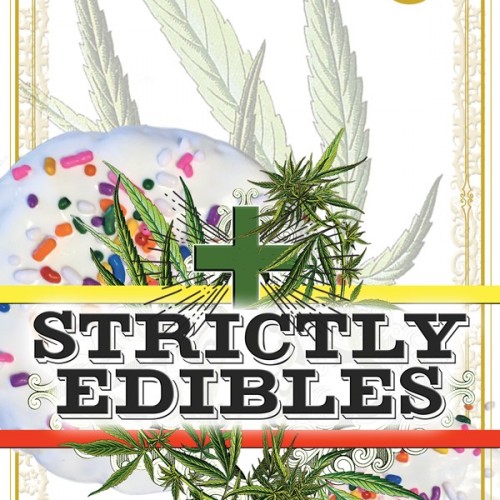 As I drove down Laurel Canyon Boulevard in my blue Mini Cooper nibbling on a 100 mg Key Lime pie donut from Strictly Edibles, the Bay Area based company known for its great tasting, high potency products, I pinched myself, just to make sure I was living real life. The edible wasn’t even close to kicking in yet, but the excitement bubbling up in my throat was undeniable as a barreled my way into the heart of Hollywood, where transgender sex educator superstar turned cannabis entrepreneur, Buck Angel, was waiting to escort me as his date to Margaret Cho’s Los Angeles engagement of her Fresh of the Bloat tour.

As a young queer kid with big dreams, I had idolized both Buck and Margaret. They embody the fighting spirit of the LGBTQ movement by proudly defying preconceived notions about how a person’s gender and sexuality can and should be expressed. Now, I was preparing to spend the evening in the same room as both of these modern day icons—hopefully not way too high on a key lime pie flavored weed donut.

I told the squealing fangirl inside me to cool it, as I met Buck outside the lobby. We took a few puffs from his Pride Cannabis vape pen, which helped calm my nerves, and headed in to sit down. The lights dimmed, and the giggles started flowing. Cannabis and comedy are one of life’s winning combinations—like peanut butter and jelly. As the 100 mg began to work its magic, I had to remind myself not to melt into my seat, and that while Buck was very nice to invite me to be his date for the evening, I probably did not have an open invitation to snuggle into his leather jacket for the duration for the performance. I was feeling giddy, giggly, and fine, until Margaret started a monologue about her recent dance with sobriety, illustrated by an anecdote about an unfortunate duel with a batch of THC infused edibles. The feeling of being too high from eating weed is a feeling I only wish on my ex-husband, and as Margaret regaled the audience with the horrors of her experience, I said a tiny prayer to the gods of weed, (as well as the nice folks over at Strictly Edibles) that I would not suffer the same fate that night as I tried to act cool in front of my offbeat teen idols.

As the curtain rose and the house lights flickered on, I was endlessly relieved to find I was still able to give Margaret Cho the standing ovation she deserved. I had survived my duel with the donut and my head even felt clear enough to drive Mr. Angel home. Achievement unlocked.