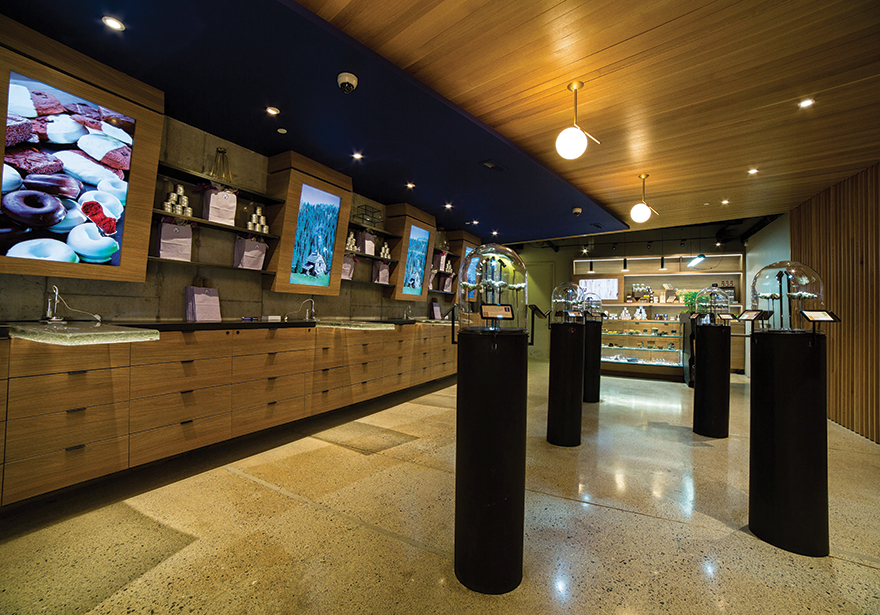 Having lived in San Francisco for 8 years, I am well acquainted with Northern California’s dispensaries. What I love about NorCal shops, is that they do not have to deal with raids or shut downs from local law enforcement, and San Francisco has certainly led the way in the passing of California’s Compassionate Use Act.

The inspiration behind creating Edibles List and Edibles Magazine sparked when I noticed the severe difference between NorCal and SoCal edibles and dispensaries. I wanted to create a way to tie the state together, and gather the nation’s edible vendors together into one central portal.

Even today, it seems that San Francisco’s dispensaries are leading the way in California. Medithrive is a prime example of the new way of cannabis. They first opened their doors in 2009, with 3 partners and a city-issued license to operate. In 2011, Federal interference temporarily succeeded, as U.S. Attorneys in California sent out thousands of letters to landlords threatening forfeiture of their property and exorbitant fines, if they did not evict any businesses relating to the sale of medical marijuana.

Medithrive voluntarily shut their doors due to the proximity to a school. For the last few years, they operated a delivery service, called Medithrive Direct, out of the back door of another brick and mortar storefront in downtown San Francisco.

Even though the federal government attempted to disrupt with medical cannabis in California for the last 5 years, cannabis is winning the war on drugs. Medithrive re-opened their storefront in 2016, after the Department of Justice made amendments to the law in 2014 and the 2015 de-funding the DEA preventing them from interfering with states that have medical marijuana laws. Additionally, San Francisco made amendments to their cannabis zoning regulations which allowed Medithrive’s location to be compliant. It also helps that since Medithrive’s original closure, four states and D.C. have legalized the adult use of cannabis.

Located at 1933 Mission Street, the decor of Medithrive is quite the juxtaposition from what you would expect when walking in off Mission St. The shop is just blocks from the 16th and Mission BART station. While going through the re-opening process, they brought on new investors and hired a “regular business world CEO,” to take their dispensary to the next level.

They spent the time to tour both medical and recreational dispensaries in Colorado and Washington for inspiraton their new and improved look. When you walk into Medithrive, it resembles an Apple store, with exposed concrete walls, backlit and glass displays and 4K resolution flatscreens enhancing the view of the trichomes on bud. You will notice there are no formal lines, no bulletproof glass windows and no formal cash registers. They wanted to an inviting design, rather than treating patients like they are criminals. Medithrive boasts an elegant edible display that allows you to see the edibles out of their packaging, unlike any other shop I have seen in California. It is a very creative and efficient way to handle the opaque packaging regulations set into place by the city.

When they opened back up, they received overwhelming support from the school nearby that was the original reason for having to close.Having security and surveillance cameras cleaned up the streets, making it safer for children going to school and walking home in the neighborhood. No longer are there heroin or crack addicts using that part of the street for shelter or drug deals.
In addition to the beautiful edibles display, their bud flowers are uniquely showcased in well-lit glass dome enclosures placed throughout the lobby floor. A knowledgeable budtender greets you to and takes you to a viewing counter, (which is an artsy poured glass molded surface), where you can checkout the selection and ask questions.

Their bud flower is all top quality medicine, and they offer a wide range of options for every price point. Medithrive’s goal was to be able to supply high quality medicine, without sacrificing quality for price. They want to give every patient the best they can get. For example, even if a patient only has $10, they can still get a top-shelf pre-roll and be able to medicate without smoking shwag weed. They also boast an extensive selection of edibles including Kiva Bars, Mediroons, Om Edibles, Infused Creations and more. They even carry 3 exclusive flavors from Strictly Edibles and they have the widest selection of concentrates I have ever seen a dispensary carry, which adds to the reason they were able to gain marketshare in San Francisco.

Medithrive’s buyer says the key to their success is giving the patient what they want, offering them multiple options in each sub genre of products, and carrying excellent medical cannabis selections. They still operate their delivery service in San Francisco as well, with a 2-hour delivery window, you can get anything they have in-store, delivered to your door.

The best part to know if you are a patient in San Francisco, is that they have the best referral program, get a free eighth when you refer a friend. Of course, there are some stipulations, the free eighth comes on your second visit, after you’ve both spent $30 on donations. They also have a generous “First Time Patient” goodie bag that comes with a Medi-Mix Pre-Roll, HempWick, stickers, a storage tin and coupon for a free gram on your next visit. If you are new to medical cannabis or need your medical card renewed, a recommending doctor’s office is conveniently located across the street.

We highly recommend checking out this amazing shop setup in San Francisco. They are located at 1933 Mission Street.