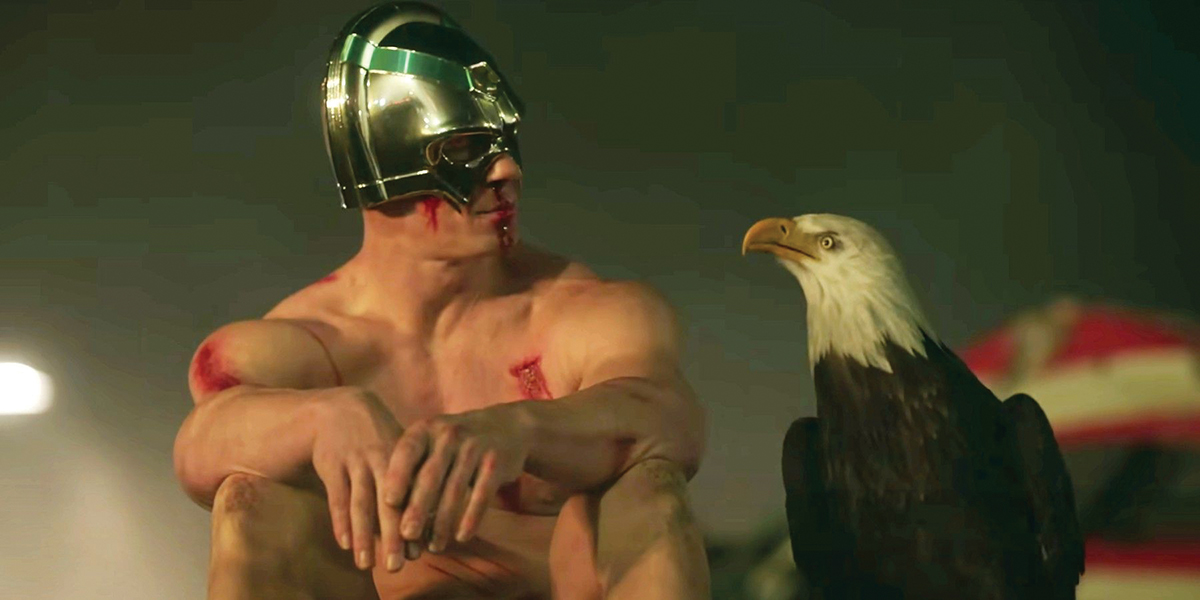 Peacemaker is a new 8 episode limited series on HBOMax starring John Cena and is a follow up to James Gunn’s 2021 film, “The Suicide Squad”, based on the DC Comic Book. The show certainly earns its place as a “For Adults Only” piece of comic book adapted entertainment, and includes adult sexual situations, extreme violence, nudity, alcohol and drug use, and a lot of profanity. However, unlike something like say, The Boys on Amazon Prime, based on the comic by Garth Ennis, or the movies “Kick-Ass” or ”Wanted”, based on the works of Marc Millar, Peacemaker is actually part of the regular mainstream DC Extended Universe series of movies. That  means that John Cena’s Peacemaker character exists in the same cinematic reality as Gal Godot’s Wonder Woman and Zachary Levi’s Shazam. In 2016, Ryan Reynolds made the movie Deadpool and proved that it was possible to take a mainstream comic book character and give them a film with a hard R rating, even when that means inserting them into a pre-existing PG and PG-13 superhero series. Then Hugh Jackman went hard R with Wolverine in “Logan” and took Patrick Stewart along for the ride, giving audiences a tragically dramatic masterpiece that had grown ups crying into their popcorn. That was followed by the Deadpool sequel, and then Margot Robbie did it with the R rated Birds of Prey, taking Reynolds’ lead by taking control of her character Harley Quinn’s cinematic direction. Robbie turned up next as Harley in The Suicide Squad, appearing onscreen with Peacemaker. These movies, and the Peacemaker series subvert the superhero genre somewhat with the sex, cussing and drug use, but they aren’t parodies even if they are sometimes extremely funny. And Peacemaker is just that: Extremely funny.

Now, this is Edibles Magazine™ and we are a cannabis publication, so let’s get right to it: Does Peacemaker get high? Yes, yes he does. More than once. Now before he’s seen smoking on screen, Chris Smith, that’s Peacemaker’s alter-ego, is seen in the first scene talking to the custodian in the hospital where he’s recovering from injuries he sustained in The Suicide Squad. They mention that they smoked weed together and the custodian adds that he doesn’t have any on him. Later, we see Peacemaker at home on the couch, in his trailer wearing civilian clothes and he’s doing bong rips. This might not seem like a big deal, and it probably wouldn’t be if we were talking about “Frenchie” on The Boys, but this is the mainstream DC Comics cinematic universe continuity and one of the heroes, dark and violent as he may be, is getting high at home. This has never happened onscreen before in DC or Marvel movies. Harley Quinn “accidentally” took a cocaine dust shower in Birds of Prey, but this is different. It’s intentional and he’s pretty much the good guy. Even mainstream anti-heros don’t consume cannabis on screen, on purpose, and if they did it would probably be so it could be spun into a public service announcement warning kids to keep off drugs. They don’t get into Tony Stark’s alcoholism in the Avengers movies but he definitely drank less and less in all of the subsequent Marvel movies following the first two Iron Man films. Peacemaker is seen in one episode sharing a joint with a woman in bed following a threesome with his sometimes-crime fighting partner “Vigilante”. None of the Avengers would do that.

In a flashback that shows Chris Smith with his brother Keith as kids, they both pledge to grow up and rock out, listen to Motley Crue, bang hot chicks and smoke pot all day. Then he accidentally kills his brother in a fistfight arranged by their Nazi white trash super villain father. Yes, it’s a different kind of superhero with a different kind of show and he uses cannabis. It’s nice to have the plant represented this way and it’s not like we’re ever gonna see Batman or Captain America spark one up, so Peacemaker will have to do. He also has an awesome pet eagle named Eagley, who gets a shout-out because this issue is all about animals.