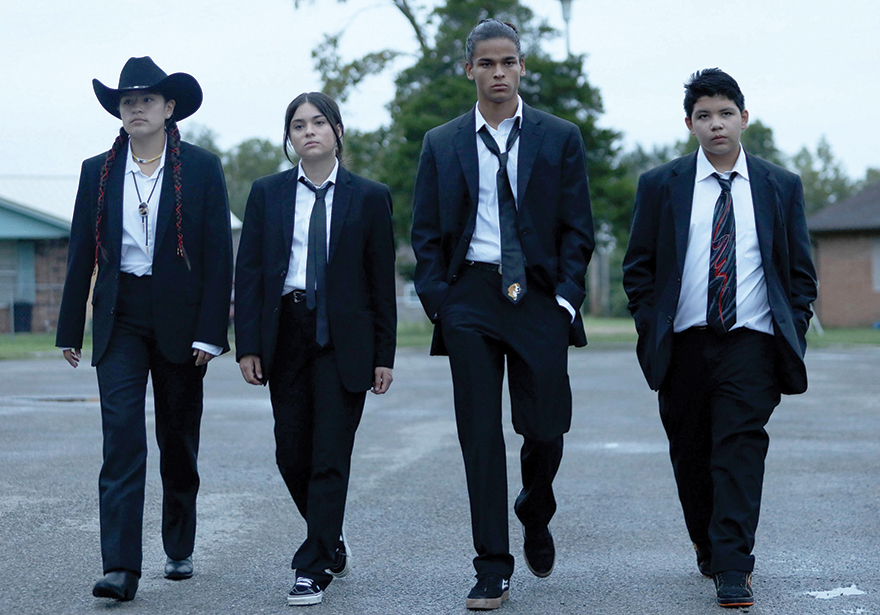 “All I do is smoke, that’s the creator’s medicine. Alcohol is the devil’s work, remember that, Just smoke herb.” – Uncle Brownie

Reservation Dogs is the new show on FX from Sterlin Harjo and Taika Waititi. There are eight episodes in the first season and they’re all great, so it makes sense that this seems to be everyone’s new favorite thing to watch. A lot has already been said all over the press about the amazing young cast and that they cast authentic native actors and it’s all true and that’s fantastic. Now because we’re a cannabis publication I think it’s important also to discuss how genuinely the show presents the Oklahoma cannabis scene in a small town. The Reservation Dogs are four 16 year old kids, Elora Danan, Willie Jack, Cheese and Bear. They live on the reservation in Northeastern Oklahoma and dream of escaping their mundane life and moving to California. It’s a vague and teenage plan inspired by the suicide of their other friend Daniel that happened a year before the events of the show. In episode 3 we get to meet Elora Danan’s uncle, Uncle Brownie. He’s played by Cayuga actor Gary Farmer, an Indigenous acting legend known for his amazing performance as Nobody in Jim Jarmusch’s art-noir western, Dead Man, starring Johnny Depp.

The kids are visiting Uncle Brownie to learn to fight so they can face off against a rival gang. Uncle Brownie is a legendary fighter but he lives alone in the hills. When they find him he’s digging up a jar of cannabis that’s been buried for 15 years. He finally agrees to teach the Reservation Dogs to fight if they’ll give him 30 dollars and take him to town to sell his weed. Unfortunately for Brownie, nobody in town wants to buy it. While he’s been living in seclusion, medical marijuana was legalized in Oklahoma. When Brownie shows his jar to a couple of potential buyers they tell him, “That smell like lawn trimmings, we get our’s from the dispensary.” His response, “What are you, a couple of narcs?”

The kids tell him: “The game’s changed uncle. People don’t smoke that 1990s weed no more… it’s legal now and it’s way stronger than what you got.”

Since everyone goes to the dispensary, he decides to go there as well hoping they might buy his stash. They go to HIJI Medical Marijuana Dispensary and he’s told by the budtender: “it’s like an antique.” Brownie hits some of HIJI’s potent new kush and gets higher than he’s been since 1967. Willie Jack tells him, “White man’s weed, cracked the code man.” It’s a more honest depiction of cannabis life than we’ve seen on television and it’s extra special that it’s so specific to Oklahoma. I went to school in Tahlequah, worked at The Cherokee Heritage Center and smoked a lot of old school weed in the nineties. The differences between then and what we get now are astronomical and it would have been hard to believe our state would be the cannabis capital that it has become. But here we are and I’m thankful.

Reservation Dogs can be seen on Hulu or FX and it’s totally worth watching.