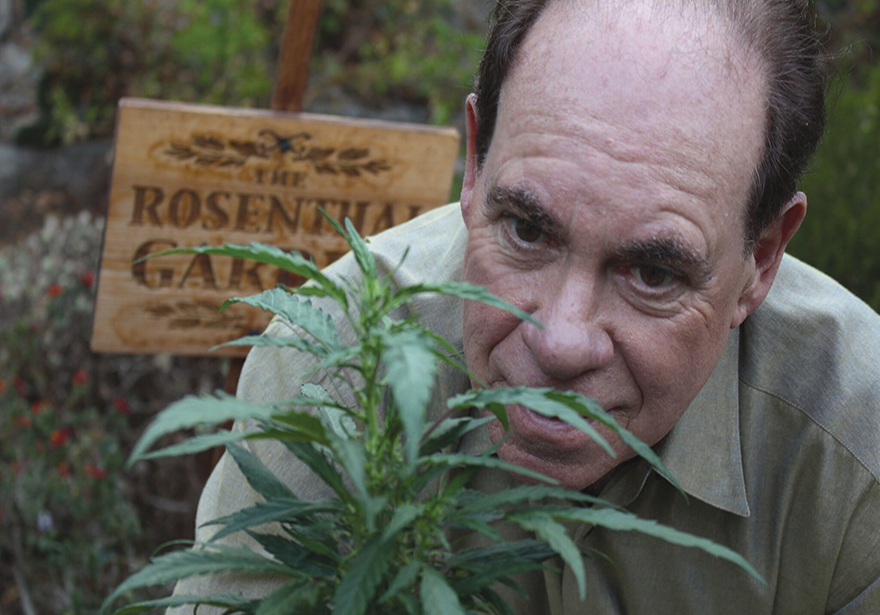 Who is Ed Rosenthal? Many of those within the cannabis world know him as the author of the Bible on growing, “Ed Rosenthal Marijuana Grower’s Handbook”, which has sold thousands of copies. If you wanted to learn how to cultivate, this was the one book you needed in your cannabis library. With his work as a master grower, activist, and philosopher, he became an inspiration to those who were part of the ganja lifestyle. But who is Ed? We hope that we can all experience the “Freak Out” with Ed and what aspects are meaningful to him and what makes him the Guru of Ganja. On a mild sunny day as the summer season was coming to an end, we found ourselves along the border of Oakland and Piedmont, California. We were invited into an outdoor garden that included a lovely Koi pond as we sat down with The Guru of Ganja, Mr. Ed Rosenthal.

Rosenthal is a horticulturist, who has risen to prominence in the cannabis world. Originally from New York, his dedication to the craft of cultivation is well known and respected. Ed is heralded worldwide as a top authority on cannabis. With more than 45 years in the industry, he has written more than a dozen books about marijuana cultivation and social policy that have collectively sold more than one million copies. His writing on cannabis was the first of this subject to be reviewed by the highly regarded New York Times. Most noteworthy is his passionate activism for standing up for the right to consume.

With his experience and passion Rosenthal was a contributor to High Times Magazine back in the 1980’s and 90’s, where his outlook and insight resonated with the MJ aficionados. Many of us became in awe of his deep knowledge of cultivation. I asked him for today’s tip for anyone seeking to grow; Rosenthal says to “grow on the backs of others”. Meaning learn from other growers to expand your experience in cultivation, learn and pass it on as we all should know how this plant is able to proliferate with excellence. His favorite strain to personally partake in would be “one he could take in an IV”, he stated with a twinkle in his eye.

He sees himself as a consultant and recovery master, assisting those whose grows need an overhaul. After taking on the responsibility of restructuring many companies to success, both across America and internationally, Rosenthal has garnered leagues of devoted followers. The demand for his time and knowledge as a consultant is abundant and he has contributed his knowledge to many publications, websites, and many speaking engagements throughout the country. But as he is in high demand by a myriad of outlets, Ed has a disdain for the corporations of cannabis and feels the green “boom” of business is taking us away from the heart of the plant.

As part of his journey, back in the early 2000’s Rosenthal was deputized by the City of Oakland, California to grow Cannabis for medical use. But so ironically in 2002 the Federal government arrested Ed for cultivation of cannabis, as the Feds did not choose to recognize the authority of each state to regulate the use of medical cannabis. As we know medical cannabis was voted to legal fruition back in 1996 for California. Even more of a social debacle they convicted him on the charges as the Feds denied the facts to the jury that Rosenthal had the proper authority by the City of Oakland to cultivate. With an appeal it was overturned, but the Feds once again choose to convict Rosenthal and in the end they could not sentence him as his first conviction had been completed. The heinous aspects of the charges turned into a five year ridicule of the so called judicial system and in 2007 the final convictions were stated and Rosenthal attorneys did appeal.

At this time in Ed’s life his expansion of his outreach is an exciting revelation as he has developed a new exciting edible. “Stardust” is a cannabis powder that is in nitrogen packets of 15 milligrams. The nitrogen keeps It fresh for up to a years and on the packet it shares how mixing in with coffee, teas and foods are simple, no fuss and effective. We were in the Rosenthal Garden amongst the array of light dep plants while our host provided a delicious cheese pizza. Ed shared that “Stardust” is a light powder that dissolves in most any type of food and the plan was to enjoy pizza dusted with our own packet of “Stardust” al fresco.

Each of us there were instructed about the best ways to infuse with the new edible and how it assimilates into the system. We were told that in most cases it takes about 30 minutes to take effect and that adding “Stardust” to most anything from drinks, sauces, most any type of food product would be beneficial to the ingestor. On to the pizza it was sprinkled and we enjoyed the taste as well as the stimulating conversation with the Guru of Ganja.

In his development Ed wanted to see something that would be convenient to ingest by anyone and in a milligram count that could be easy to adjust for most people. The price point was a factor as well and a suggested retail for the packet is around $5. Rosenthal could see the growth of acceptance of infused products and knew that the supporters would be seeking items that would work into an active lifestyle. Cannabis users are expanding their desire to infuse responsibly in different situations and something such as “Stardust” seems to be a great addition for the consumers. It is well packaged, with a great shelf life and being that it will blend by taste to most any flavor and mixes in just about any food or drink products, what more could you ask for.

Regarding the state of cannabis through the Guru’s eyes, Ed see’s there should be no police overseeing the use of cannabis, Growing, distribution and consumption of cannabis should be in the future civilly regulated, what a revelation! That we as cannabis supporters should be self-reliant of the responsible acts of consumption and not look to municipal or Federal authorities to govern personal cannabis use. Remember it was a medicine for thousands of years until the 1930’s when our right to consume was restricted and the prohibition of cannabis was established. By the way it is only a plant and does the system over see how we utilize the other plants we may tend to grow in our gardens?

At this time Ed feels that in the future concentrates will become more popular with consumers. and dabbing activity will overtake the desire for flower based smoking. But he does expect respect for the flower bud to continue. As we observe how the levels of intensity in concentrates creates, over a period of time, a dependency for a higher level of infusion. It seemed that Rosenthal was observing this factor, but not necessarily in approval.

With looking at the future of recreational legalization within the State of California, Ed does not agree with any initiatives that preclude use of cannabis for children and pets. He feels that with correct information the whole plant is beneficial for all to utilize successfully. We have too many years of limitations as well as major judicial roadblocks to be able to consume freely and he does hope that we’ll be able to rise above to civil reliance. Just as we were at that moment experiencing the “Stardust” freely with each other in a responsible environment, we learned about the Rosenthal Pre Rolls that were provided to us in a Sativa strain. Rolled slim and petite it was enjoyable as we fed the Koi fish pizza.

With this personal mantra of civil self-reliance, Rosenthal has been inspired by the words and music of the singer songwriter Pete Seeger, whose song “Good Morning America” became an anthem for America, freedom and grass roots pride. Seegers’ heartfelt words resonated with a generation of down to earth people. Ed is inspired by music and the power of the words and while sitting by the Koi pond discussing the community and direction of cannabis he had an intense thought. Whether it was the “Stardust”, Ed Rosenthal pre-rolls or internet connectivity we had a hard time linking to a website that he was intent of showing us. We went inside to his private office and he proceeded to log on to his computer to search for The Mothers of Inventions song Freak Out! Was that Ed’s freak out making sure that his outlook and interpretation on the society and government was related to this Frank Zappa song?

Once the site was pulled up and “Freak Out” began to play, the deep realization at the heart of Ed and his philosophy is socialism. The sensitive connection of Zappas’ shared state of the state and the timeless repetitiveness of the situation was drastically similar. 1960 to 2016 it was still the same issues backing the desires for individuals to live their life as they wish without the shadow of “The Man” forever scrutinizing it all. Then the next song in our concerto of social consciousness was “Kill For The Police” by the Fugs. Are we being guided to exert ourselves for the municipal peace keepers?

Who is Ed Rosenthal? If the situation arrives where you can sit back and listen to Frank Zappa’s’ Mother of Invention’s “Freak Out”, listen and open yourself up to self-reliance and support us all taking back civil responsibility for the personal consumption of cannabis. If you can have a sprinkle of “Stardust” while you listen, maybe you’ll understand, respect, and cherish who Ed Rosenthal is.

Ed is married with children and has been on the faculty of Oaksterdam University, which is a progressive school for the cannabis industry. His focus is on cultivation, and consulting for the industry and private consumers. His prolific writing has been enjoyed by thousands and he continues to garner new supporters of his work. He is the Executive Director of Green Aid, which is the Medical Marijuana Legal Defense and Education Fund. Through this group, they have exposed excessive force by SWAT Teams in arrests, and how civil rights were denied to many for cultivation issues. www.green-aid.com. Books written by Rosenthal, just to name a few include: Marijuana Grower’s Handbook, Marijuana Pest and Disease Control, Why Marijuana Should be Legal, The Big Book of Buds series, and Beyond Buds. http://www.edrosenthal.com Ed feels that the future belongs to the understanding of the Terpenes.