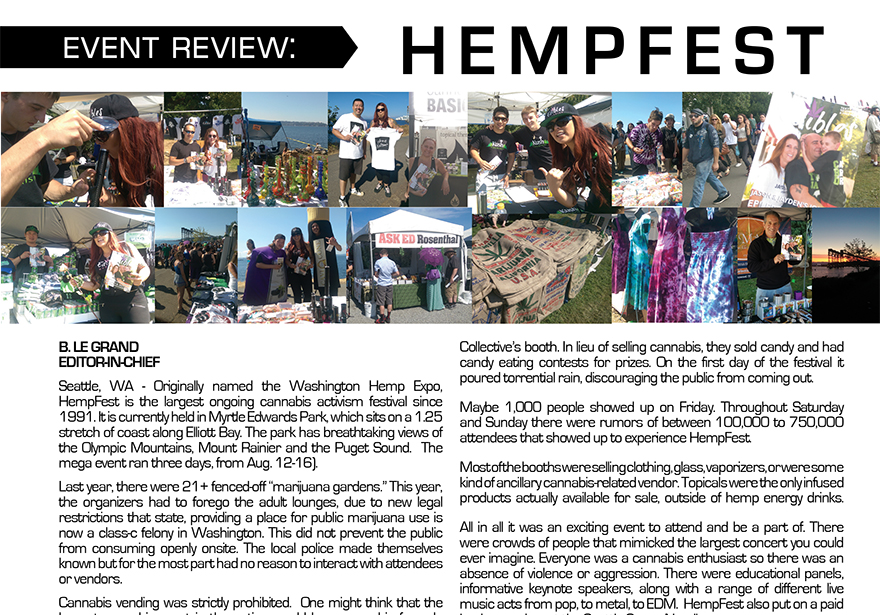 Seattle, WA – Originally named the Washington Hemp Expo, HempFest is the largest ongoing cannabis activism festival since 1991. It is currently held in Myrtle Edwards Park, which sits on a 1.25 stretch of coast along Elliott Bay. The park has breathtaking views of the Olympic Mountains, Mount Rainier and the Puget Sound. The mega event ran three days, from Aug. 12-16).

Last year, there were 21+ fenced-off “marijuana gardens.” This year, the organizers had to forego the adult lounges, due to new legal restrictions that state, providing a place for public marijuana use is now a class-c felony in Washington. This did not prevent the public from consuming openly onsite. The local police made themselves known but for the most part had no reason to interact with attendees or vendors.

Cannabis vending was strictly prohibited. One might think that the largest cannabis event in the nation would have cannabis for sale galore, but this was not the case. State law prohibits the sale of any cannabis or cannabis infused product outside of anywhere but the state sanctioned location associated with an I-502 license. So we saw a lot of naive youngsters going booth to booth asking around for cannabis or concentrates.

The Edibles List Magazine team hung out at Mother Earth Holistic Collective’s booth. In lieu of selling cannabis, they sold candy and had candy eating contests for prizes. On the first day of the festival it poured torrential rain, discouraging the public from coming out.

Maybe 1,000 people showed up on Friday. Throughout Saturday and Sunday there were rumors of between 100,000 to 750,000 attendees that showed up to experience HempFest.

Most of the booths were selling clothing, glass, vaporizers, or were some kind of ancillary cannabis-related vendor. Topicals were the only infused products actually available for sale, outside of hemp energy drinks.

All in all it was an exciting event to attend and be a part of. There were crowds of people that mimicked the largest concert you could ever imagine. Everyone was a cannabis enthusiast so there was an absence of violence or aggression. There were educational panels, informative keynote speakers, along with a range of different live music acts from pop, to metal, to EDM. HempFest also put on a paid business mixer at the Seattle Space Needle.

If you are a supporter of cannabis in the Northwest region, we highly suggest checking out this annual event. Part of the reason it’s such a great event and so many people come out, is because it’s free. That’s right, you may have pay to travel to get there, but the event itself costs nothing to get in. Just be prepared to wait in some pretty long lines and walk at least a dozen miles.