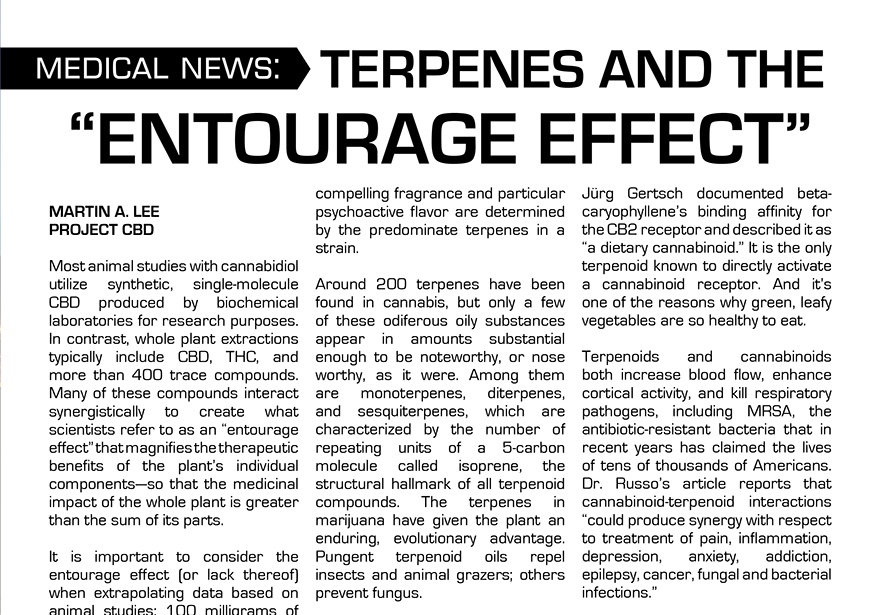 Most animal studies with cannabidiol utilize synthetic, single-molecule CBD produced by biochemical laboratories for research purposes. In contrast, whole plant extractions typically include CBD, THC, and more than 400 trace compounds. Many of these compounds interact synergistically to create what scientists refer to as an “entourage effect” that magnifies the therapeutic benefits of the plant’s individual components—so that the medicinal impact of the whole plant is greater than the sum of its parts.

It is important to consider the entourage effect (or lack thereof) when extrapolating data based on animal studies: 100 milligrams of synthetic single-molecule CBD is not equivalent to 100 milligrams of a CBD-rich whole plant cannabis extract.

Consider the role of terpenes, for example. Terpenes are volatile aromatic molecules that evaporate easily and readily announce themselves to the nose. Various researchers have emphasized the pharmacological importance of terpenes, or terpenoids, which form the basis of aromatherapy, a popular holistic healing modality. Marijuana’s compelling fragrance and particular psychoactive flavor are determined by the predominate terpenes in a strain.

Around 200 terpenes have been found in cannabis, but only a few of these odiferous oily substances appear in amounts substantial enough to be noteworthy, or nose worthy, as it were. Among them are monoterpenes, diterpenes, and sesquiterpenes, which are characterized by the number of repeating units of a 5-carbon molecule called isoprene, the structural hallmark of all terpenoid compounds. The terpenes in marijuana have given the plant an enduring, evolutionary advantage. Pungent terpenoid oils repel insects and animal grazers; others
prevent fungus.

Terpenes, it turns out, are healthy for people as well as plants. A September 2011 report by Dr. Ethan Russo in the British Journal of Pharmacology discussed the wide-ranging therapeutic attributes of terpenoids, which are typically lacking in “CBD-only” products.

Beta-caryophyllene, for example, is a sesquiterpene found in the essential oil of black pepper, oregano, and other edible herbs, as well as in various cannabis strains and in many green, leafy vegetables. It is gastro-protective, good for treating certain ulcers, and offers great promise as a therapeutic compound for inflammatory conditions and auto-immune disorders because it binds directly to the peripheral cannabinoid receptor known as “CB2.”

In 2008, the Swiss scientist Jürg Gertsch documented beta-caryophyllene’s binding affinity for the CB2 receptor and described it as “a dietary cannabinoid.” It is the only terpenoid known to directly activate a cannabinoid receptor. And it’s one of the reasons why green, leafy vegetables are so healthy to eat.

Terpenoids and cannabinoids both increase blood flow, enhance cortical activity, and kill respiratory pathogens, including MRSA, the antibiotic-resistant bacteria that in recent years has claimed the lives of tens of thousands of Americans. Dr. Russo’s article reports that cannabinoid-terpenoid interactions “could produce synergy with respect to treatment of pain, inflammation, depression, anxiety, addiction, epilepsy, cancer, fungal and bacterial infections.”

The terpenoid profile can vary considerably from strain to strain. Patients who abandon a suitable strain for one with higher THC and/or CBD content may not get more relief if the terpenoid profile is significantly different. The nose knows: Choose a cannabis strain that smells good to you.

If you would like more information on this organization please go to: www.projectcbd.org